This weeks extract from Deep Kyoto: Walks is brought to you by the BBC! We are all very pleased that BBC Travel have used a version of Pico Iyer’s article “Into the Tumult”, to launch their new Words & Wanderlust site. The version published on the BBC site differs mainly in the second half, though there are numerous small changes throughout. To read the original, buy our book! 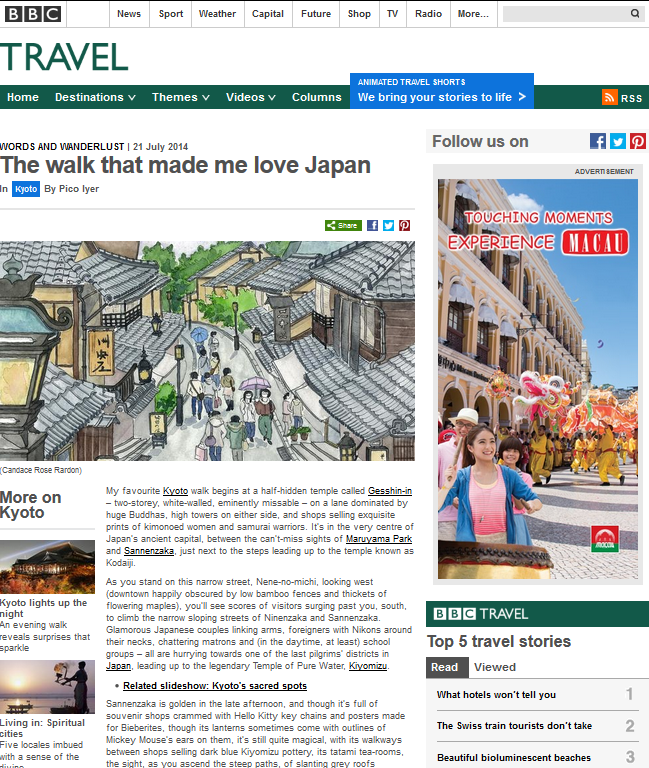 The BBC version of Pico’s article is entitled “The walk that made me love Japan” and is splendidly illustrated by wandering artist, Candace Rose Rardon. A big thank you to both Pico Iyer for his continued support for this project and also to BBC Travel for referencing our book with the article. Here is an extract:

My favourite Kyoto walk begins at a half-hidden temple called Gesshin-in ­– two-storey, white-walled, eminently missable – on a lane dominated by huge Buddhas, high towers on either side, and shops selling exquisite prints of kimonoed women and samurai warriors. It’s in the very centre of Japan’s ancient capital, between the can’t-miss sights of Maruyama Park and Sannenzaka, just next to the steps leading up to the temple known as Kodaiji.

As you stand on this narrow street, Nene-no-michi, looking west (downtown happily obscured by low bamboo fences and thickets of flowering maples), you’ll see scores of visitors surging past you, south, to climb the narrow sloping streets of Ninenzaka and Sannenzaka. Glamorous Japanese couples linking arms, foreigners with Nikons around their necks, chattering matrons and (in the daytime, at least) school groups – all are hurrying towards one of the last pilgrims’ districts in Japan, leading up to the legendary Temple of Pure Water, Kiyomizu.

Sannenzaka is golden in the late afternoon, and though it’s full of souvenir shops crammed with Hello Kitty key chains and posters made for Bieberites, though its lanterns sometimes come with outlines of Mickey Mouse’s ears on them, it’s still quite magical, with its walkways between shops selling dark blue Kiyomizu pottery, its tatami tea-rooms, the sight, as you ascend the steep paths, of slanting grey roofs extending below you towards the city. At the top, behind Kiyomizu, you come to a waterfall surrounded by hills that take you back to the world that might have been here before a soul had seen it. The temple itself was in place two centuries before the second millennium began.

But even as the crowds throng toward these postcard vistas, I recommend you move in the other direction, towards what ultimately looks like chaos. Turn right, and start walking towards the Gionkaku Tower at the end of the street, beside a modern temple. If you want to absorb Kyoto, you have to head into the clamour of downtown and find those graces that are not incidental to the place, but at its very heart. Both shopping streets and templed hills, after all, glow in the late November light with a magic-hour sharpness that deepens the blue above even as it catches the leaves whose turning speaks of coming winter and coldness and dark.

Deep Kyoto: Walks is an independently produced anthology of meditative strolls, rambles, hikes and ambles around Japan’s ancient capital. All of the writers and artists involved in this project have lived and worked in Kyoto for many years and know it intimately. The book is in part a literary tribute to the city that they love and in part a tribute to the art of walking for its own sake. 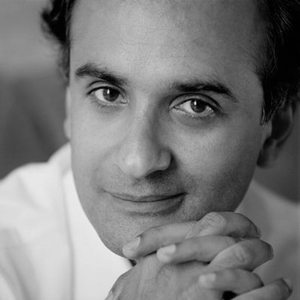 Acclaimed travel writer, Pico Iyer, is the author of 15 books, including The Lady and the Monk which describes his first year in Kyoto. He has been based around Kyoto and Nara since 1987.