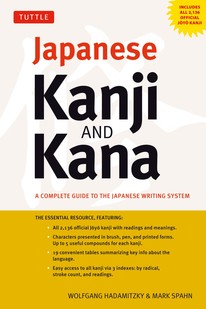 This book is designed to help students of Japanese learn the first 92 basic kana characters and the 2,136 standard jōyō (officially sanctioned “daily use”) kanji characters. Clearly it is meant to be a study aid for the complete spectrum of ability from true beginners to advanced. The book is divided into two main sections: the introductory chapters and the kanji listings. I will review each in turn.

Part 1: The Introductory Chapters
The first section of the book consists of 60 pages that give a thorough explanation of the development and organization of the Japanese writing system. A lot of the information given here is interesting but fairly academic, so after you read it once you may not need to refer to it again. There are some sections that are worthy of note though, both here and in the study tips given at the end of this section.

Part 2: The Kanji Listings
The bulk of the book, the second half, consists of a little over 300 pages of jōyō kanji listings. The individual kanji therein can be looked up via three indexes which are organized by radicals, stroke counts and readings. With each kanji, are presented its meanings, readings, stroke-count, radicals and example compounds. This is the most practical part of the book which can be used either as a reference tool or simply as a course book of kanji that can be studied and memorized from start to finish. 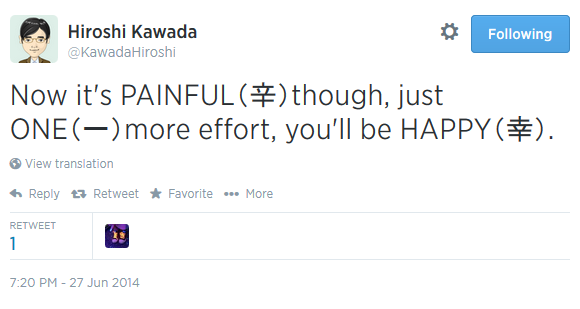 How I would use this book to study kanji:
Everybody has to find the best way to study for themselves and the only way you can do that is by trial and error. However, based on my own experiences of studying Japanese I would focus on the kanji listings in the second part of the book, and work through them in the order prescribed.

To practice writing the kanji according to their proper stroke count, you can download writing sheets for the first 300 kanji from author Hadamitzky’s website here: Writing Templates. Beyond the first 300 kanji you can purchase writing manuals. However, I believe beyond the first 300 kanji, further writing drills are unnecessary as you are likely to start feeling frustrated by your slow progress, and some kind of mnemonic system will become essential to aid your memory retention.

If you are in Japan you can buy blank flashcards in any convenience store or even 100 yen shops. You should write the kanji according to its correct stroke order on one side and its readings, meanings and a simple mnemonic sentence on the other. Mnemonics can be built up using the radical meanings listed in Table 16 (see above) of this book.

Overall I think this is a good book and could be a useful study aid for a student of Japanese kanji. If you wish to order it, you can do so directly from Amazon.com here: Japanese Kanji & Kana.

I am about to embark on a summer of intense study so be prepared for more Japanese language textbook reviews over the coming months!