Last Saturday Lucinda Cowing and I went to the flea market at Toji Temple to hand out flyers for our Bring & Buy charity sale on the 28th. The market at Toji takes place monthly on the 21st and is always very popular, but as it fell on a Saturday this month and as the weather was fine there were a LOT of people there and we could give out a lot of flyers. Here’s Lucinda in action. 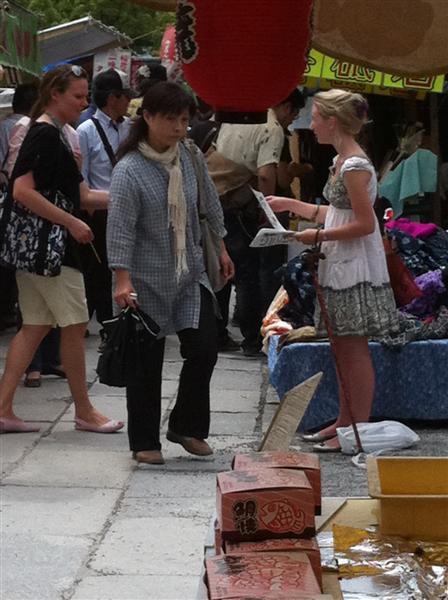 I parked myself at the gate next to these two ladies: Naruse-san and Fujisawa-san. They had come from Shiga to collect money for 止揚学園 (shiyougakuen), an organization that helps people with severe disabilities both here and abroad. I got talking to Naruse-san whilst handing out flyers and she was kind enough to help me hand out flyers by giving them to people who made a donation for her cause. Thank you Naruse-san! 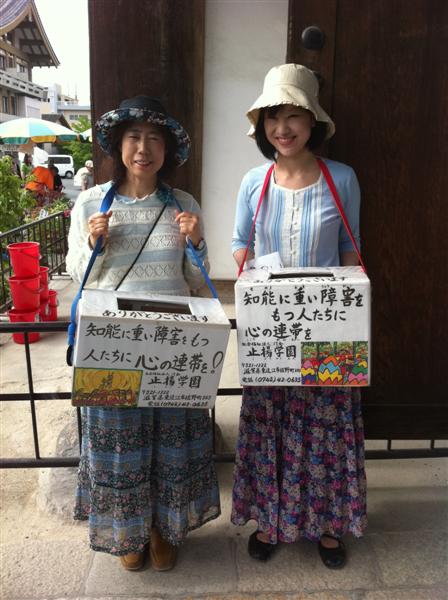 After a couple of hours I went for a stroll around the market and soaked up the lively atmosphere. It really is a unique event and well worth experiencing. Here among the historic buildings and bustling crowds you can get a true feel for what makes Kyoto tick. 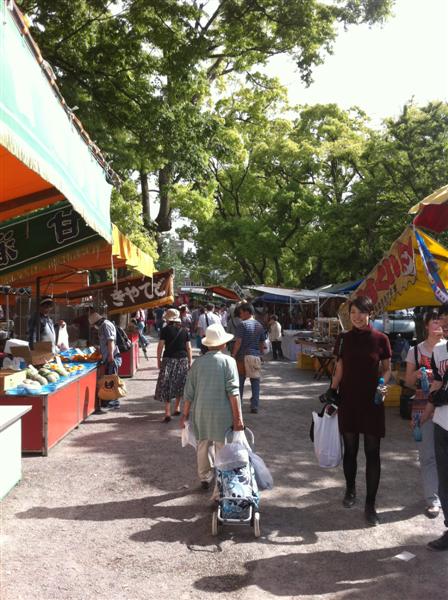 Toji means “East Temple” and was originally founded as one of two temples set up to guard the city from evil spiritual energies. These temples were positioned on the flanks of the massive Rashomon gate at the southern entrance to the Heian Imperial capital. Today however, both the legendary gate and the “West Temple”, Sai-ji, have long since disappeared and only Toji remains. 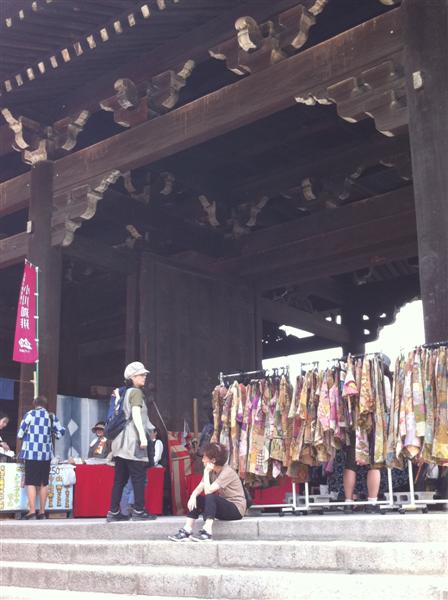 Work began on Toji Temple in the year 796 but by 823 it still was not complete, so the Emperor Saga asked the Buddhist saint and scholar Kūkai, to take over. Kūkai was famous for his public works projects and it was he who finished the building project and made Toji the center of the esoteric Shingon Buddhist sect in Kyoto. Because of this strong association with Kūkai, the flea market at Toji Temple is named “Kōbō-san”, after Kūkai’s posthumous name Kōbō Daishi. Kūkai passed away on the 21st day of the third month in 835 and so in his honour the market is held each month on the 21st. There is a legend though that Kūkai didn’t die, but rather like the British legend of King Arthur, he sits deep inside a mountain in Wakayama, still meditating and awaiting the coming of the next Buddha.

In the centuries that have passed since Toji’s founding, war and fire have taken their toll on the buildings several times, so most of the current buildings date from the 17th century. Among them the kodo lecture hall is known for its mystical mandala imagery, and the kondo main hall for its statues of the healing Buddha Yakushi. The famous five storied pagoda, Goju-no-to, which is considered a symbol of Kyoto, has gone up in flames on a full five occasions and was last rebuilt in 1643. Today it stands 57 meters high and is the tallest wooden tower in Japan.

The life blood of this city however, has always been its trade. Walking amongst the crowds at Toji Temple you really feel a part of an ongoing history and a living tradition. Here at the market you can find anything: food stalls, bonsai trees, second hand clothes, paintings, pottery, accessories, cutlery, the list goes on… After exploring the grounds and finding your bargains though, be sure to pay your respects to the temple’s 1200 years of history. As you exit the gate from the temple grounds it is customary to put your palms together in a gesture of prayer and turn once again towards the temple to bow in salutation. 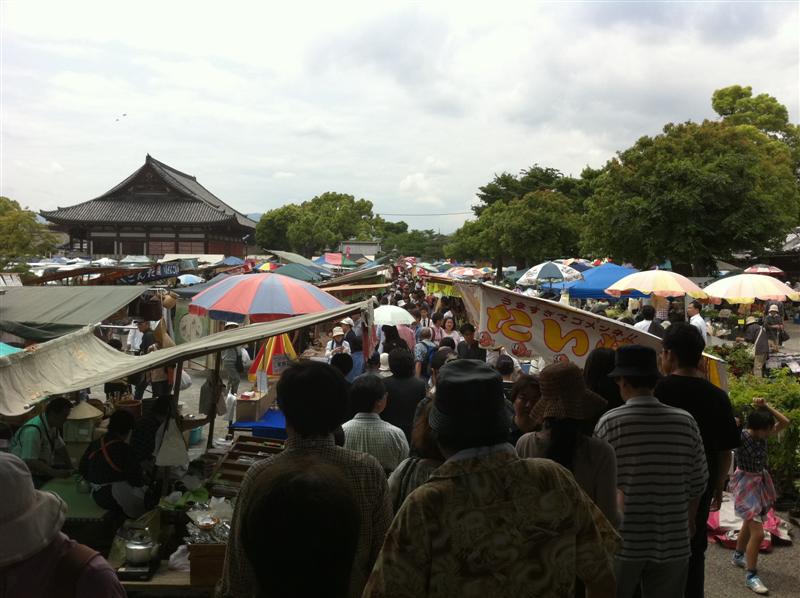 The Toji flea market takes place on the 21st of each month from 7:00 am till around 16:00 and is one of Kyoto’s three major markets. The other two are the handicraft market at Chionji Temple that takes place every month on the 15th, and the market at Kitano Tenmangu Shrine (known as Tenjin-san) on the 25th. There is also a smaller antiques market at Toji Temple on the 21st of each month. Toji Temple is a 15 minute walk, south-west of Kyoto station close by the intersection of Ōmiya and Kujō Street. Entry to the market is free but there is a small fee to enter the temple buildings and entrance to the pagoda is restricted to only a few special occasions each year. Here is a map.