This month’s extract from Deep Kyoto: Walks is taken from a very fine ramble by the artist Joel Stewart, titled “In Praise of Uro Uro”. Uro uro is a Japanese expression for aimless wandering. 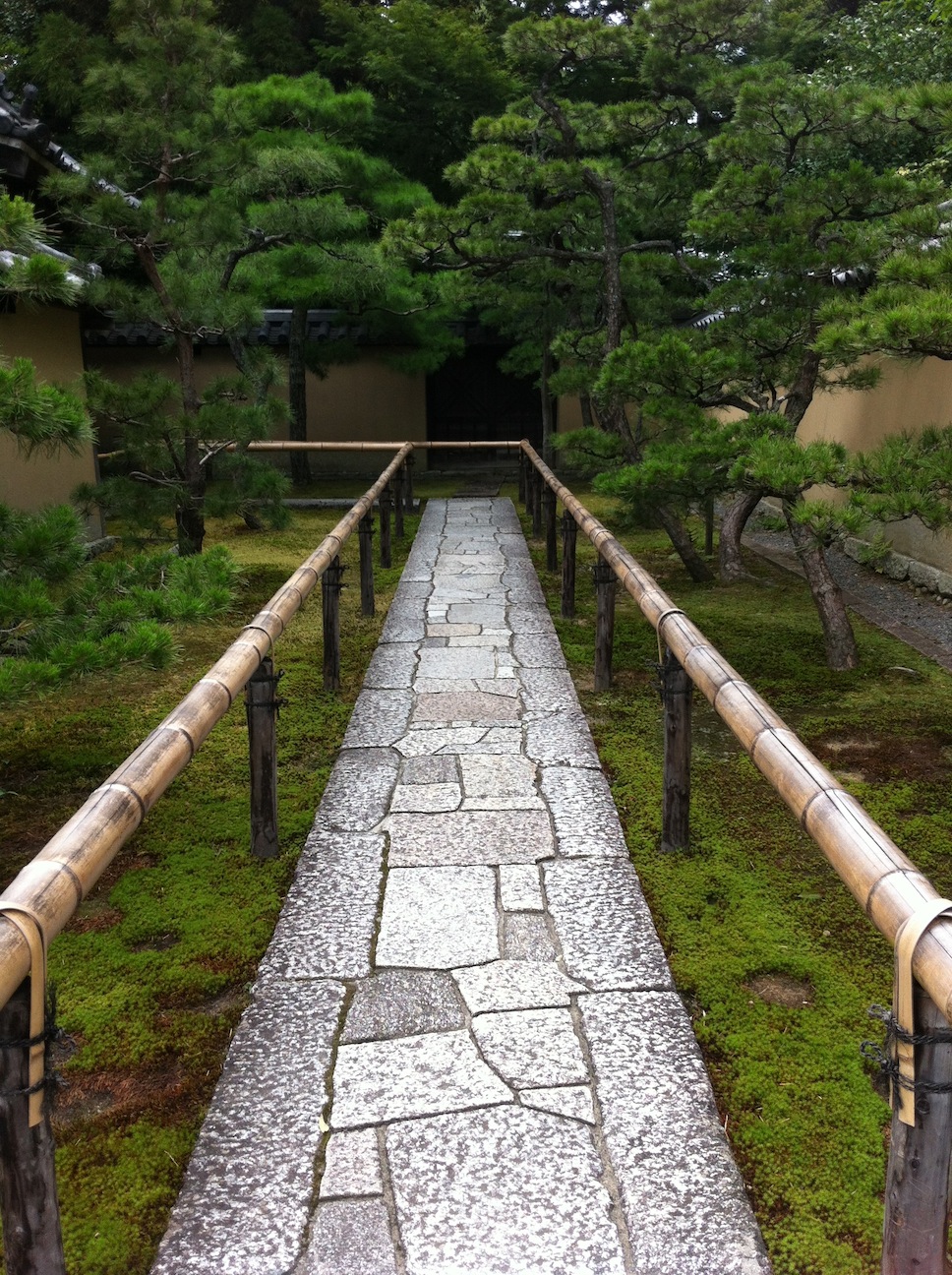 I really don’t think much needs be said here about Kōtō-in, other than it’s a real escape from the city, right in the city. And beside all the interesting history you can find about this place, I think essentially, its purpose hasn’t changed that simple fact. It is, by design, a perfect example of understatement; a deceptively simple and brilliant combination of layout and materials meant to change your awareness and heighten your senses, starting as you make your way in. Highly calculated without it seeming to be so at all, Kōtō-in is refreshing and cleansing.

One of my favorite tricks for people visiting from abroad is to send them first to Kinkakuji, the Golden Pavilion, with all its over-the-top no expense spared attitude broadcasting loudly, its crowds and, yes, all that gold. Once done with that, bring them here to Kōtō-in’s less traveled, quieter, more inward-looking space, to show the other end of the spectrum of the Japanese aesthetic-meets-spirit equation. Kōtō-in still functions as a place of respite and refuge…

The entry way alone is worth the price of admission: several scenes are framed in succession as you go in, each frame helping you shed one more layer of the city behind you, and by the time you make it to the veranda overlooking the garden, you are lost in love and have forgotten why. You’ve been set up. Today, like before, I make my way in my socks to the veranda and sit. And sit some more. Bamboo high above, a vast carpet of moss below, and thread-like layers of maples in between. Silent except for the leaves rustling above and a bit of conversation by the couple beside me. In the center of the garden stands a craggy old stone lantern acting as a lone sentry. This scene is rich with the barest minimum. I feel no hurry, and since it is always so hard to leave, I just wait until my butt tells me it’s time to get up. Some places are just conducive to the simple act of observation… and letting the mind wander.

On the opposite side is the teahouse known as Shoko-ken, designed by one of Sen no Rikyu’s disciples, Tadaoki Hosokawa (who also happened to be the samurai warrior-cum-daimyo apparently responsible for Kōtō-in itself). It’s worth a visit just to scratch your head…..”What is ALL the fuss about these teahouses?…It’s SO DARK, mumble, mumble, etc…”. And yet. If you sit there a bit, let your eyes adjust, details start to emerge. I check out the stained earthen walls, the textures and planes, and note the hushed outside world. Everything but the absolute essential is removed from this space, for the guest who is about to receive tea. Senses are honed by what is there, and equally so, by what is absent. It’s sort of like blindfolding someone and placing an ice cube in their hand.

Time passes and my accustomed eyes see how the tokonoma and shoji window are placed in relation to each other so that the filtered light comes in at a diagonal and softly illuminates the base of the alcove like a subtle spotlight. Imagine what a single flower in season would look like in a rustic, hand-molded vase right next to you as the tea master passes you a warm frothing bowl of tea out of the shadows… Cool stuff to ponder in the darkened silence here.

Text & photograph by Joel Stewart. To read the rest of this story, order or download our book here: Deep Kyoto:Walks.

Joel Stewart is an American artist from Washington State who has resided in Kyoto since 1986. His work is in the permanent collections of several US museums and can be seen online at both “Joel Stewart Art” on Facebook and www.joelstewartart.com.