In the movie “Lost in Translation”, the character of Charlotte (played by Scarlett Johansson) takes a day trip alone to Kyoto. As she wanders through a temple and a shrine her sense of being lost in this alien land is compounded by the fact that she has absolutely no idea at all what she is looking at. This is a very common experience for foreign visitors to Kyoto. Even if you were to hire a guide, how to make sense of a culture with which you are entirely unfamiliar? Kyoto is rich beyond belief with sites of historical, literary, artistic and religious importance. The average Japanese tourist, on visiting these legendary locations, instantly recognizes his or her own heritage and is thrilled. However, the average foreign visitor, lacking cultural background, is left nonplussed by the sheer volume of unfamiliar names and dates. How to tell your temple from your shrine, your maiko from your geisha, your Momoyama jidai from your Muromachi era? How much would you need to study, even to begin to get to grips with it all? The thought is overwhelming. Well, next time you visit Heian Jingu, thank the gods for Kyoto: A Cultural History. In this fine book, John Dougill has done your homework for you. 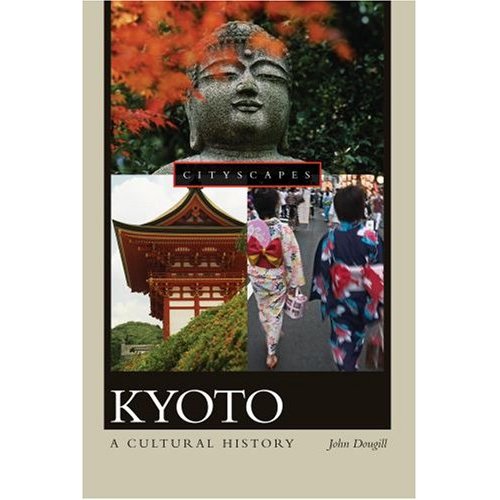 Whether you are a long term resident or a short term tourist, this book is an excellent primer to this great city’s history, traditions and ever vibrant culture. Divided into eleven themed chapters, it lends itself to use either as a leisurely continuing narrative or as a work of reference to be dipped into at need. Early in the book, we learn that Kyoto was originally laid out symmetrically in accordance with geomantic and Confucian principles. This gridlike structure of parallel streets survives today and makes Kyoto, unlike most Japanese cities, very easy to navigate. Similarly the book also has a fine, many faceted symmetry and is equally easy to explore.Two stories stand like reflecting mirrors at the book’s beginning and end. The first chapter details the birth of the city as Heian-Kyo under the Emperor Kammu in 794. The last describes Kyoto’s reinvention of itself as a modern city after the departure of the Meiji Emperor in 1869. Within these bounds are five vital chapters that focus on those particular aspects of the city’s culture that have shaped it so profoundly: Buddhism, Noh, Tea, Geisha and Zen. We learn of Mount Heian’s central role as the progenitor of so many sects of Japanese Buddhism. And in learning to distinguish those sects, we come to a new appreciation of the temples we visit and of the art they contain. The fascination of the esoteric arts is revealed to us; the “deep sense of peace” that comes with the tea ceremony, the “theatrical wonder” of Noh. We walk with the author through the geisha districts of Gion “in the late afternoon” and “get a sense of how things once were.” Gion, he tells us “has the feel of another age, as if cordoned off from the modernity that surrounds it.” And then we sit with the author to grapple with Zen’s riddling nature, and realize its far reaching influence upon Japanese arts.
Other chapters take us chronologically through Kyoto’s history and 1200 years of artistic and literary tradition. In these pages we meet those great historical figures who shaped modern Japan; Oda Nobunaga, Toyotomi Hideyoshi, and Tokugawa Ieyasu. We also encounter those writers and artists whose work still haunts the Kyoto of the imagination: the romance of Genji

, The Tale of the Heike

– a tragic tale of war, narratives of passion

, poetry of love and loss

and words of contemplative retreat

… Dougill gives us the big picture, but he also delights us with little secrets in fine brushstrokes. “Some of the best kamakura sculpture,” he tells us “is on display in a small and nondescript hall, unknown to the millions who do the rounds of the city’s tourist sights”. And after listing the better known festivals and events he writes:

Some of the best experieneces… are to be had at the lesser-known events: the re-enactments of Heian poetry competitions… the full moon ceremony at Kurama… Priests who imitate the cawing of crows… the ceremonial burning of old dolls… the bell-crickets of Kegon-ji which chirp the whole year round.

To my knowledge, no other guide book offers this much detail or expertise. Not that this guide is attempting to give you the final word on Kyoto. It is sewing the seeds of a cultural treasure hunt so that you may pursue your own serendipitous path through this city’s streets and find your own deep Kyoto. On reading it myself, I found innumerable avenues of investigation were opened up to me and it has become an essential part of my library.

But more than just a guide, John Dougill’s book is a celebration of the city – and an argument in its defence. When the Meiji Emperor left for Tokyo in 1869, we are told,

…tearful citizens lined the streets to see him go. For a city that had been the imperial seat for over a thousand years, it was a traumatic moment. The transfer left it with an empty heart…

Many since have mourned Kyoto’s faded glory and, particularly in post-war years, its transformation from “a traditional cityscape of wooden houses and towering pagodas” into a ferroconcrete nightmare of “high-rises, neon lights, and overhead wires”. Whilst acknowledging some “partial truth” in this unhappy view, the author also celebrates the energy of the modern city in its “ever changing urban scene”, its continuity with the past as a center of traditional crafts and its reinvention of itself as a culinary capital, a centre of innovation and as “the heart of Japan”. Tradition is not simply something old to be preserved, but is the living point where past, present and future flow into and through each other. And for tradition to live it must continuously recreate itself. Dougill celebrates this living continuity. Take for example his description of the annual festivals held at Ebisu shrine:

Here is all the chaos and jollity of a medieval fair. Jostling crowds stand ten deep before the shrine, tossing coins over the heads of those in front towards the offering box. The altar is piled high with over 200 huge sake bottles, and along the sides is a busy trade in amulets and keepsakes. Gagaku music provides an other-worldly atmosphere as miko (shrine maidens) perform sacred dances, and smiling festival-goers carry off bamboo branches bearing trinkets and treasure-boats to bring them prosperity. It does not take much imagination to substitute topknots and kimonos for the modern clothes and to see here the figures of another age. Here in this good-natured throng, the old merchant bustle of… Miyako seems to come alive before one’s very eyes.

John Dougill’s Kyoto, “the Janus City”, looking simultaneously forward and back, is defiantly and joyously alive.

Kyoto: A Cultural History is available from amazon.com and amazon.co.jp.