Disclosure: Some links on this page are affiliate links from which I will earn a commission. As an Amazon Associate I earn from qualifying purchases.

“Contemporary maiko are young women, typically between fifteen and twenty years of age, who have chosen to train in an arts profession with roots in the merchant culture and pleasure quarters of the Edo period (1603–1867). Their archaic hairstyles and kimono link them to this artistic past, easily identifying them as maiko. Although other geisha communities in Japan once had apprentices, too, the maiko is famously a Kyoto phenomenon today.”
— From Maiko Masquerade by Jan Bardsley

A new book from University of California Press should be of interest to our readers. A hat tip to the very excellent Shinpai Deshou for bringing it to my attention. 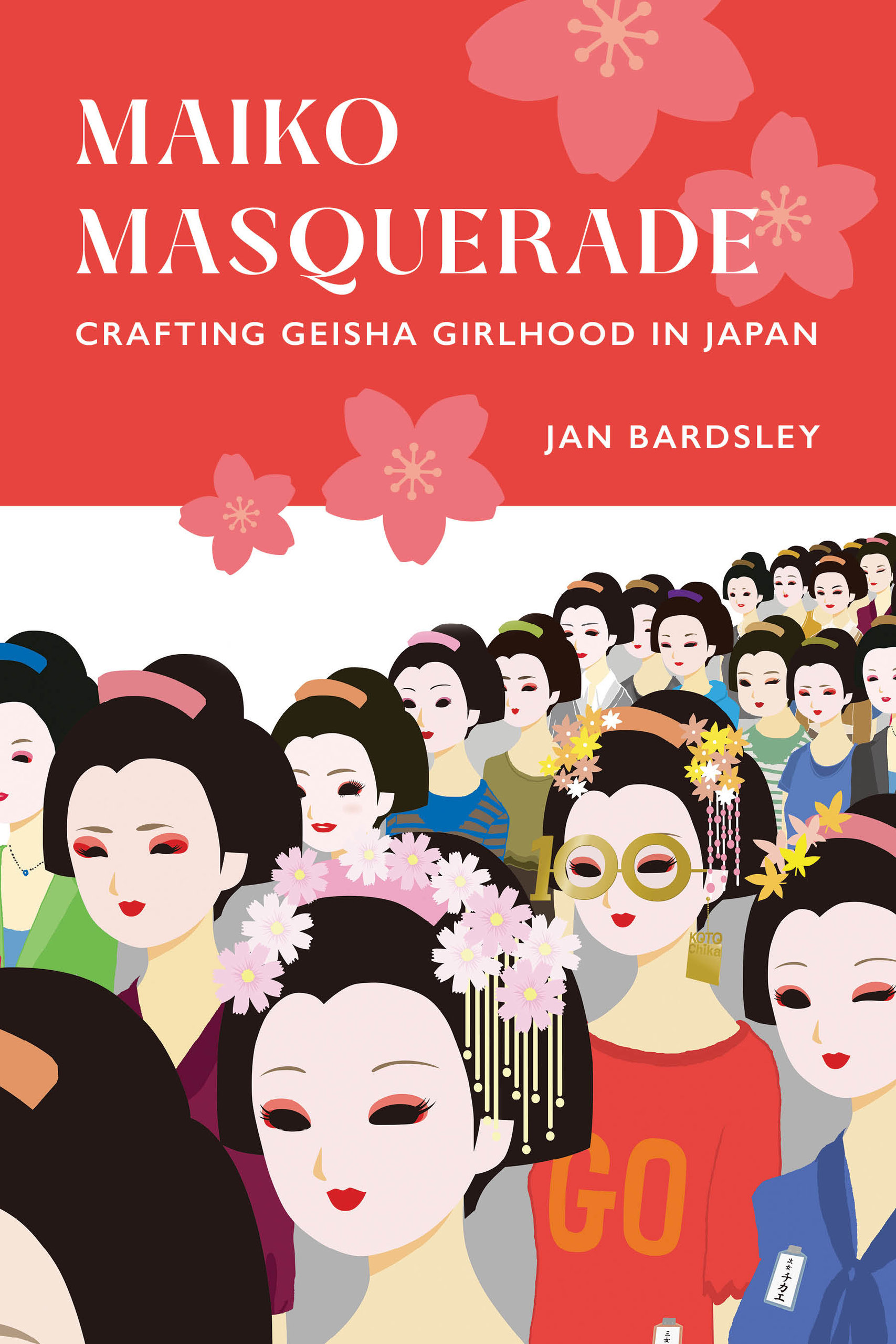 In Maiko Masquerade, the author Jan Bardsley turns her attention to maiko, as a cultural phenomenon. Maiko, she tells us, represent the “quintessential Kyoto girl”, and as the city’s mascot, the image of the maiko is ubiquitous in Kyoto, appearing on maps, posters, stationary, and souvenirs and even from the art atop a cappuccino or matcha latte “milky maiko smile at you”. Maiko are also the key protagonists in many Kyoto-based films, novels, TV dramas, and manga. It’s true that for tourists visiting Kyoto, maiko represent an ideal. Catching a glimpse of a maiko in one of the city’s flower districts, is a magical moment for many visitors, and cosplaying as maiko is a popular tourist activity too.

A major theme of this book is how the image of the maiko has changed from past depictions of maiko as the innocent victims of sexual exploitation, to contemporary 21st century depictions, largely created by women, which emphasize the maiko’s agency. Maiko today are seen as young women who have chosen their own path out of a yearning for the traditional world of kimono and dance. In a fundamental transformation, Bardsley explores how maiko have come “to symbolize the hardworking young artist, the chaste keeper of traditions, and the exemplary Japanese girl” and this in turn has “elevated the maiko’s Kyoto community as a site of deeply rooted cultural values.” By examining popular literature, films, manga and other media Bardsley investigates this archetype of Japanese girlhood as the locus of questions related to “personal choice, gender-appropriate roles, regional and ethnic identity, and the performance of idealized and contradictory femininities.”

“Bardsley moves past the reverent tone of the cultural gatekeeper to present maiko through television, art, cosplay, autobiographical texts, and more. This book will be appealing to college instructors for its discussions of race, gender, and nationality; yet a broad audience of readers will also relish its richness and humor.”
–Laura Miller, Ei’ichi Shibusawa-Seigo Arai Endowed Professor of Japanese Studies and Professor of History,University of Missouri-St. Louis

“This is the first book in English to focus on representations of the maiko, positioning these celebrated apprentice geisha at the fruitful intersection of gender studies, Japanese popular culture, research on childhood, and current debates over ‘Japaneseness’ and ‘tradition’ Maiko Masquerade is the rare scholarly study that is sophisticated, accessible, and a true delight to read.”
–William M. Tsutsui, author of Japanese Popular Culture and Globalization

About the Author:
Jan Bardsley is Professor Emerita of Asian and Middle Eastern Studies at The University of North Carolina at Chapel Hill. She is the author of Women and Democracy in Cold War Japan (SOAS Studies in Modern and Contemporary Japan, Bloomsbury, 2014) and The Bluestockings of Japan: New Women Fiction and Essays from Seitō, 1911-1916 (University of Michigan, Center for Japanese Studies, 2007) for which she was awarded the 2011 Hiratsuka Raichō Award by Japan Women’s University.

She is co-editor with Laura Miller of Manners and Mischief: Gender, Power, and Etiquette in Japan (University of California Press, 2011) and Bad Girls of Japan (Palgrave, 2005) and co-producer/director with Joanne Hershfield of the documentary, Women in Japan: Memories of the Past, Dreams for the Future (2002).

The recipient of several campus teaching awards, Bardsley regularly taught the course, “Geisha in History, Fiction, and Fantasy” at UNC-Chapel Hill from 2001 to 2018 and presented talks on geisha to university and community audiences across the U.S. In a recent blog post she relates how questions her students asked her during that course inspired her latest book.