Whether you are interested in tea ceremony or traditional architecture, two pieces I wrote for GuideAdvisor earlier this year, offer my top tips for for your trip to Kyoto. 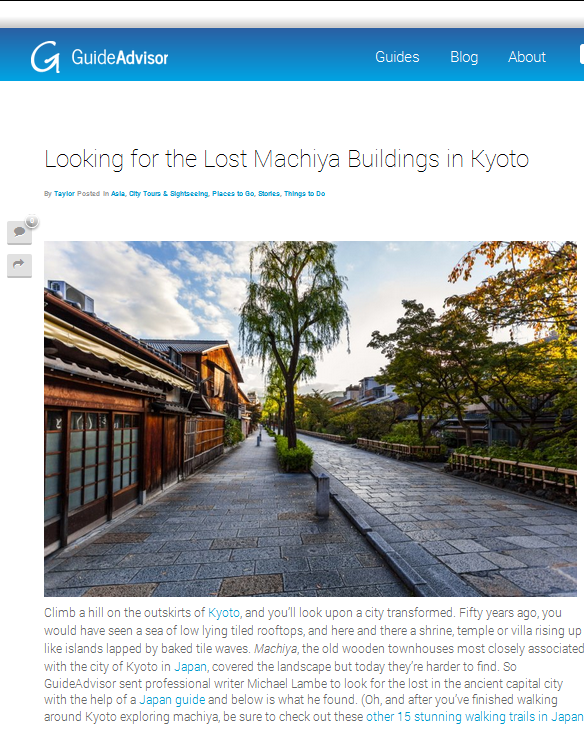 The first article is on how to find the very best machiya:  the traditional wooden townhouses of Kyoto. After decades of neglect and outright destruction, machiya have been undergoing something of a boom in popularity in recent years.

Climb a hill on the outskirts of Kyoto, and you’ll look upon a city transformed. Fifty years ago, you would have seen a sea of low lying tiled rooftops, and here and there a shrine, temple or villa rising up like islands lapped by baked tile waves. Machiya, the old wooden townhouses most closely associated with the city of Kyoto in Japan, covered the landscape… Machiya were the houses of merchants and craftsmen, designed to be lived and worked in. Long sturdy structures of simple grace, they closely lined the city’s narrow streets, the style of lattice-work at front giving tell-tale notice of the business within. Today that old skyline, with its sweeping sea of tiles has gone, and the cityscape initially presents to the eye a jumble of gray and brown apartment blocks, city offices, and pachinko parlors. If you go and explore the city though, the older more traditional buildings are still there, down amidst the looming towers of modernity, and their dark wooden beams and refined latticework still enchant us with the flavour of old Kyoto.

You can read the rest of the article here: Looking for the Lost Machiya Buildings in Kyoto. 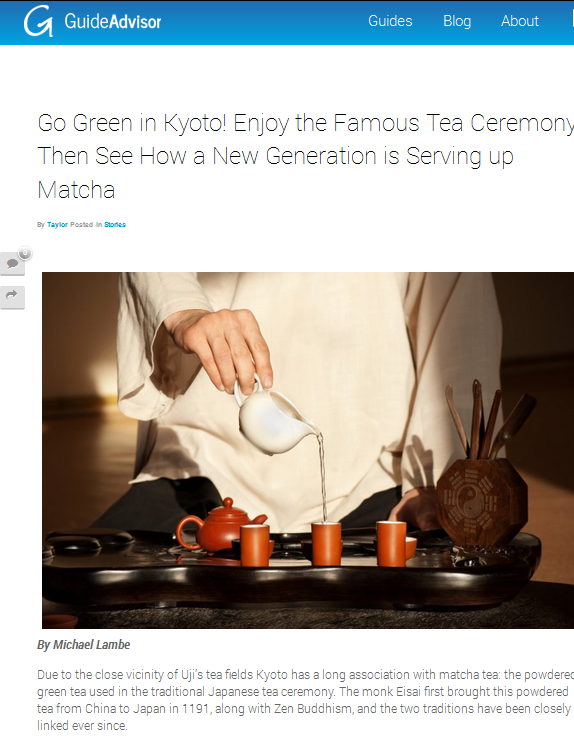 My second piece is a guide to enjoying matcha tea in the ancient capital, whether in traditional tea ceremony, or in the many matcha flavored food products that are on sale here.

Due to the close vicinity of Uji’s tea fields Kyoto has a long association with matcha tea: the powdered green tea used in the traditional Japanese tea ceremony. The monk Eisai first brought this powdered tea from China to Japan in 1191, along with Zen Buddhism, and the two traditions have been closely linked ever since.

In Kyoto, Eisai founded the city’s oldest Zen temple, Kenninji, and on its grounds you can find a teahouse designed by the legendary 16th Century tea master Sen no Rikyu, who is responsible for developing the refined tea ceremony that we know today. Called variously Chado, Sado or Cha-no-yu, this ceremony ritualizes the act of preparing, sharing, and tasting tea into a slow, meditative process that emphasizes simplicity, grace and serenity. Yet despite the simplicity of the ceremony itself, the Way of Tea is intimately bound up with many other traditional arts such as calligraphy, ceramics, flower arrangement, and Japanese cuisine. So if you want a gateway into Japanese culture and philosophy, a cup of matcha tea is where you start!

You can read the rest of the article here: Go Green in Kyoto! Enjoy the Famous Tea Ceremony Then See How a New Generation is Serving up Matcha

And while you are about it, why not check out pro-photographer Paul Crouse‘s piece on the 10 Best Photo Spots in Kyoto.