UPDATE: Sadly Mund Shokudo closed in December of 2016. We wish Masuda Ryohei all the best with his new working ventures.

Among all of Japan’s muggy summer cities, Kyoto is held to be the muggiest. Sheltered as it is by mountains on 3 sides, it sits in a natural narrow basin. Come summer, the humidity rises from its plentiful crystal streams, springs and rivers – and stays there, for there are no cool breezes to blow it away. In this intense sweltering heat, the spirit droops, passions flag and one’s appetite wilters with it. Is it possible to consume anything other than crushed ice and macha ice cream in this sultriest of seasons? Fortunately, generations of canny Kyoto homemakers have devised seasonal obanzai dishes to pique your palate in any weather. Obanzai ryori is the traditional cusine of the ordinary Kyoto home kitchen. The dishes, of vegetables, seafood and soups in varied combinations may appear at first glance to be just as ordinary. However, using only the freshest seasonal ingredients and sophisticated seasonings they are highly nutritious and perfectly suited to Kyoto’s intense climes. Many restaurants in Kyoto specialize in serving this humble obanzai cuisine and one such restaurant is Mund Shokudo: a little diner in central Kyoto offering good old fashioned wholesome Kyoto dishes with a subtle creative flair.

The owner and cook, Masuda Ryohei, having worked for years in other people’s kitchens, went independent and opened up his own business last February. He’s created a nice space too. The white walls are decorated with artwork by his friends and the white counter top with colorful fresh vegetables and those traditional obanzai side dishes. As you sit at the counter and watch him prepare your meal you can see that he relishes his new found freedom and he is certainly giving free rein to his creative instincts for the menu changes every single day. Indeed, one of the reasons I love coming here is that I can learn a little something new about Kyoto cuisine every time I visit. 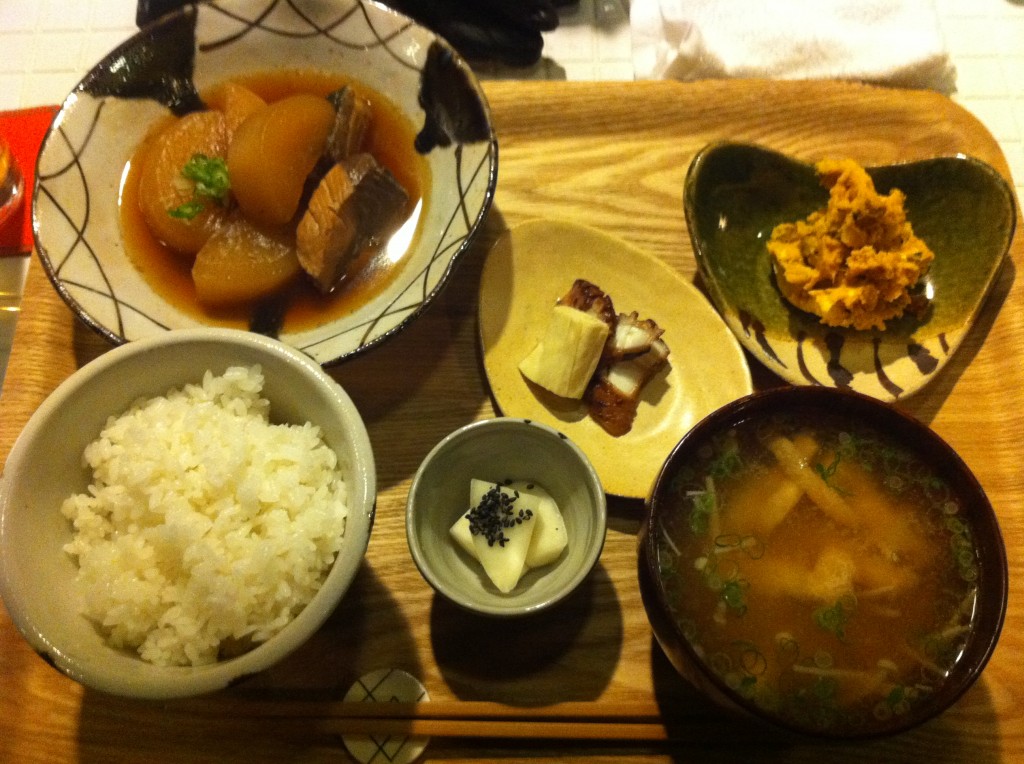 The most economical choice on the menu is the daily dinner set: a choice between meat or fish, with rice, soup and two or three side dishes. However, because of the ever-changing seasonal menu it is much more fun to order a la carte. During July and August the menu featured a variety of light summer dishes and invigorating veggies. On one visit I ordered 冬瓜 (tougan literally winter gourd), a kind of juicy white gourd served up with a mentaiko sauce of spicy cod roe. Tougan is a typical summer dish in Kyoto, and is believed to cool the body. Bite into it and its juice rushes over your tongue like a cool mountain stream. Its taste is light and refreshing and the mentaiko sauce compliments it nicely with its peppy saltiness. The iwashi tempura came next, sardines served in a crispy batter, you can dip them in salt or in soya sauce (I prefer soya). Their delicate aroma belies the soft rich flavour within.

There was no salad on the menu on this occasion but I fancied some greens, so Masuda-san whipped one up specially for me. Exploding with colors, my bespoke salad was a nutritious mix of broccoli, sweet corn, olives, peppers, cherry tomatoes, sweet onions, olives with some marinated octopus thrown in for good measure! In the dressing Masuda-san had added coriander and a twist of sudachi, a lime-like citrus fruit that gave the salad a fresh, zesty tang.

焼き茄子のお浸し (yaki nasu no ohitashi) is an eggplant that has been first grilled then boiled in bonito flavored soy sauce. Another traditional summer dish, my Japanese companions laughed as they told me how difficult it is to prepare that yaki nasu, first turning the eggplant slowly over an open flame before peeling it while still hot with your fingers. The flesh of the eggplant is soft and delicate on the tongue but the ginger it is served with adds some zing.

Finally I ordered the Hamachino Misotataki, finely chopped raw yellowtail mixed with miso paste and served with ginger and green shiso perilla. The earthy taste of the miso and the piquant herbs gave me a thirst for some nihonshu, so I ordered the Amano Kakehashi (天のかけはし）. A local sake, its fruity clean flavor complimented this last dish perfectly.

Because Masuda-san is also a dj in his spare time, a visit to Mund Shokudo is as much an education for the ears as it is for the palate and the background music is more eclectic than you can possibly imagine. In one sitting I was treated to Booker T. Jones, Coati Mundi, Marc Ribot, Lou Reed, The Natural Yogurt Band and the soundtrack to El Topo! I suspect a lot of the regular customers come along as much to talk about music as they do for the food. Masuda-san himself says he simply wanted to create a nice place for people to hang out. “I really don’t mind if people just come in for a beer or a coffee,” he says. That would be a shame though as the food is pretty fine and cheap too. I can easily get a good meal and a couple of drinks here for under 2000 yen.  The only drawback I can think of is that the menu is in Japanese, and although Masuda-san is happy to explain it to you, he will do so in Japanese too. So if you come, bring a Japanese friend or at least a dictionary for without some Japanese ability you will be pretty stuck for what to choose. If you can speak a bit of Japanese then I guarantee you will enjoy both the Kyoto style home cooking and the friendly atmosphere. Mund is a German word meaning “mouth” (but pronounced munto in Japanese) which Masuda-san chose simply because he liked the sound of it. However, the word is apt because Mund Shokudo is not only a good place to eat but a nice spot for a pleasant chat too. 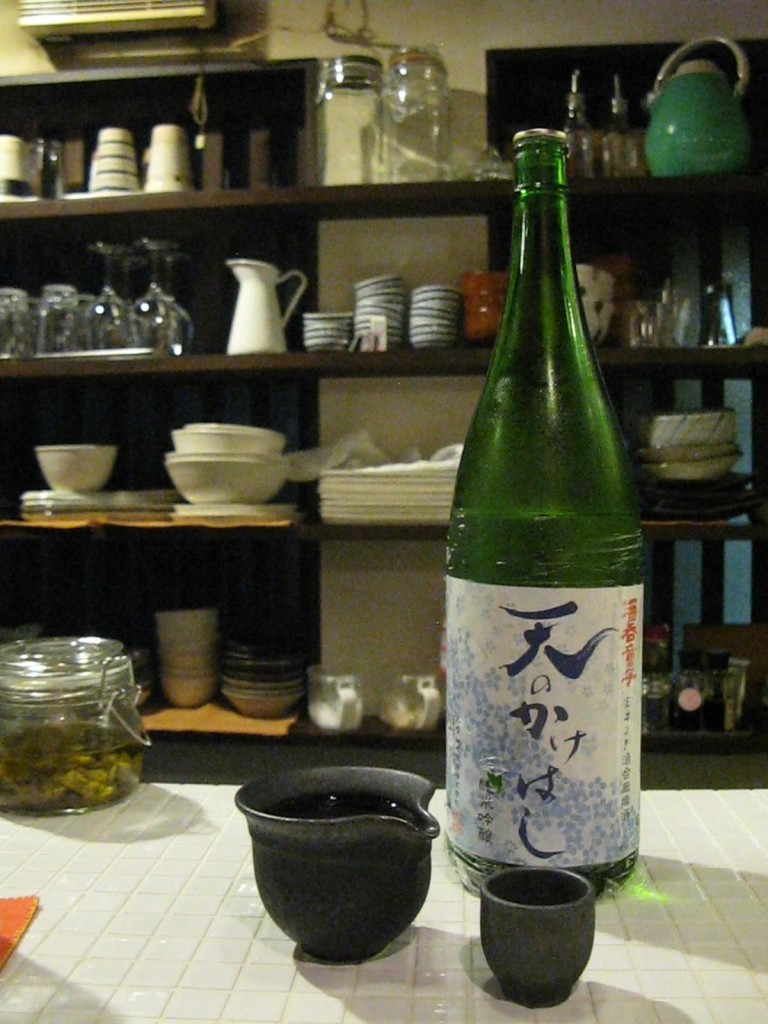 As summer is drawing to a close, many of the dishes featured above will most likely not be available in the coming months. But Masuda-san has already got the Aki Aji in and I’m looking forward to trying some typical Kyoto autumn obanzai over the next few weeks. Here are some more pictures of some of my favorite Mund Shokudo dishes:

How to get there: From the Hankyu Kawramachi station it’s about 7 minutes on foot. From the Keihan Shijo Gion station about 9 minutes. To find it head south from Takashimaya Department Store on the Shijo – Kawaramachi intersection. Take the second left onto Takatsuji Doori and Mund Shokudo is on your right.