In this extract from Deep Kyoto: Walks, Robert Yellin encourages us to seek chance and adventure along the Path of Philosophy…

Not Sure Which Way to Go
Let’s Get Lost on the Philosopher’s Path!
ROBERT YELLIN

One autumn twilight moment I was standing on a small bridge overlooking the Philosopher’s Path’s canal and saw a young couple staring at a map, eyes flittering over the horizon and at each other, each looking to the other for direction, it obvious that neither knew where they were, except that they were on the Path of Philosophy! The guy trying to act like he knew what to do said, “That’s the direction we should go, no wait, let’s head that way!” The girl, in all her feminine wisdom replied, ‘Let’s get lost!” Yes, I thought, that’s what one should do on Philosopher’s Path, get lost and discover.

The Philosopher’s Path or Tetsugaku no Michi in Japanese, stirs up such grandeur in its lofty name that one might even expect to be enlightened somewhere along the way. Some may hit that satori state along the path, as when Ikkyu in 1420 heard a crow not far off the path and got it! And that’s the beauty of this fabled Kyoto walk. It’s not only what one discovers on the paved canal-lined stretch; it’s what one encounters when they step off the guided way. After all a path is a great metaphor for life itself, getting lost often brings the greatest discoveries within and without. Getting lost—and finding oneself—on the Philosopher’s Path: what a grand way to spend a day in Kyoto.

Michi (also read as dō) means not only path or road, but also means ‘The Way’ in Japanese. It is not only an integral part of the essence of the Philosopher’s Path or The Path of Philosophy, but can also be found in many names of Japan’s great martial and cultural arts, such as Budo or Chado. Each person’s ‘michi’ will never be the same as anyone else’s and again is a great metaphor for each step taken along this most quaint stroll.

Where to take the first step? Most start from the ‘Tetsugaku no Michi’ signboard that hugs the corner of Imadegawa and Shirakawa streets diagonally across the way from the signboard with the dancing Octopus. Walking east along this entrance one can see Daimonji in the distance with its trapezoidal deforested area where cut lines can be sensed; those lines form the kanji character for Dai—or Large—and a huge bonfire is set alit each August 16th in that form to guide souls back to the otherworld. A fitting view for the first few steps on the path as Daimonji has seen millions of tourists and pilgrims start from the same spot and the mountain never knows where each unique journey on the path will end.

For me I start the path with maybe one or two spots on my list to visit and then let intuition take over. Of course, walking straight along Imadegawa and heading towards the Silver Pavilion one will pass many shops such as a cheap, delicious Japanese eatery next to a coffee shop with a big Teddy bear that has been sitting at the counter since the 60’s; a Michelin-starred restaurant; an open-air Italian spread; the estate and museum of the famed Nihonga painter Hashimoto Kansetsu (1883–1945); and of course countless vendors selling traditional Kyoto staples. The Silver Pavilion is of course a must visit and best at opening or before closing, if those times are possible. Here, so much of Japanese culture crystallized in the 15th century in what is known as the Higashiyama Bunka or Eastern Mountain Culture. Based on the illusive aesthetic ideals of wabi-sabi, Higashiyama Bunka under the guidance of the Silver Pavilion’s retired Shōgun Ashikaga Yoshimasa directed new developments for such famed Japanese arts such as the Tea Ceremony, Flower Arrangement, Noh Drama and Calligraphy. Living itself changed for the elite with the introduction of the ‘Japanese room’ or washitsu.

Bordering the mountains and in Yoshimasa’s time quite inaccessible from the city, the location was chosen for the quiet contemplation of life, nature and man’s fleeting position between the two; surely Yoshimasa would approve that one major stop on the Philosopher’s Path is his subdued ‘palace’ surrounded by his moon-viewing sand cone (resembling Mt.Fuji) and his exquisite garden. Get lost in time.

A noticeable shift in the air occurs a few minutes’ walk from the Silver Pavilion, passing by rows of ordinary homes (not on the Philosopher’s Path, part of the Getting Lost Path) heading south when the trees of Hōnen-in Temple appear. It strikes the senses immediately, the crispness of the air and the ionic air change in energy, the smell, the tingle. There are magical spots all around Kyoto, many to be found along and nearby the Philosopher’s Path, yet none is as serene as Hōnen-in. It’s one of Kyoto’s hidden gems.

Hōnen (1133-1212) was an extremely important Buddhist figure and the temple bears his name. Once, I stood enraptured for many minutes before a hanging scroll depicting Hōnen; a simple portrait it was, yet never before have I seen a face so full of compassion, light, and sheer contentment. That same energy fills the space of Hōnen-in. Walk up the stone steps from sunlit lightness into a moody shaded grove and in the distance is The Gate. Beaming from its open wooden doors is a radiant light that is heavenly. The stone path leading to the thatched gate is uneven, for a reason. You’ll figure it out.

A gate is always another metaphor in Japan, passing from one world to the next, from the mundane daily existence to a silky world of divinity and beauty. There are always two long rectangular sand mounds upon descending the other side of the Hōnen gate where a theme of water is always seen. These are called Byakusadan. The message from Byakusadan is that you walk between the two mounds in order to ‘use’ the water to cleanse your body, mind and spirit. Next, wander about the very small compound and you might even find a small block that says, ‘Listen, Think, Accept, Practice, Believe’—but not necessarily in that order. I believed once that if I left my new bicycle unlocked at Hōnen-in in the height of the autumn tourist season that it would still be there when I returned. It was.

Hōnen-in is not a tourist place to see things per se, but a space to feel, to sense the magic of shadows and light, man entwined with nature, the ‘now’ connected to all time. My brother visited once and was amazed at the ‘quality of the silence’ and noted that silence is not simply the absence of noise. There’s a vibration to silence that one can sense. Maybe it’s the spirit of Hōnen himself. 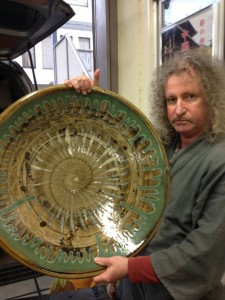 Robert Yellin is an American Japanese ceramics specialist who has resided in Japan since 1984. He writes regularly on Japanese ceramics in numerous publications. For ten years he wrote the “Ceramic Scene” column for the Japan Times, the largest English newspaper in Japan. His articles have also appeared in Daruma magazine, WINDS magazine, Ceramics Art & Perception, and Asian Art Newspaper. Robert is the author of Yakimono Sanka published by Kogei Shuppan, a book about sake utensils which was later translated into English under the title Ode to Pottery, Sake Cups and Flasks. He is a member of the Japan Ceramics Society (Nihon Toji Kyokai) and his articles have appeared in its monthly publication Tohsetsu.
Robert owns and runs Robert Yellin Yakimono Gallery in Kyoto in addition to an informational website: www.e-yakimono.net, and an online Japanese ceramic art gallery: www.japanesepottery.com. Robert is available to give lectures and lead tours dealing with Japanese ceramics.

See also: Deep Kyoto Walks Movie: “Not Sure Which Way to Go” with Robert Yellin