On Wednesday I took a walk over to the Sanjo-kai Shōtengai shopping arcade and popped into Randy Channell’s machiya cafe Ran Hotei. 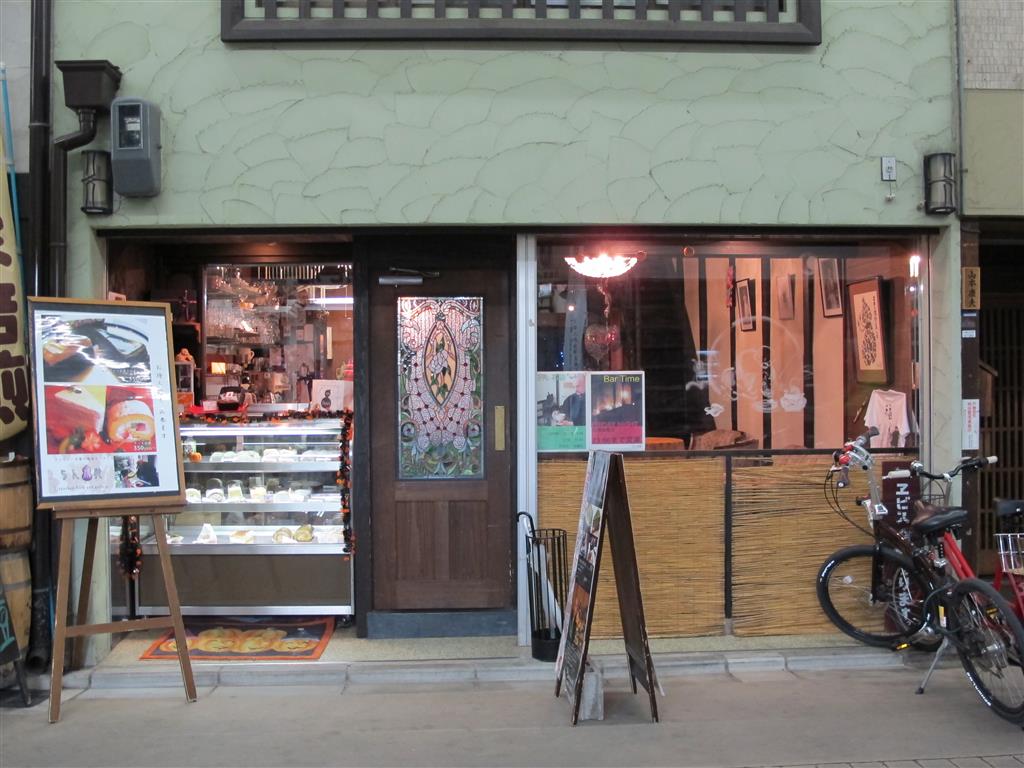 Randy is well known as a master of Japanese tea ceremony, and he does teach a few tea ceremony classes at Ran Hotei. Mainly though he gives classes at a shrine near the Imperial Palace. So if you are not interested in tea ceremony, that’s ok, Ran Hotei is essentially a cafe, a place to relax, with coffee, tea and other standard beverages plus some damn fine cake. 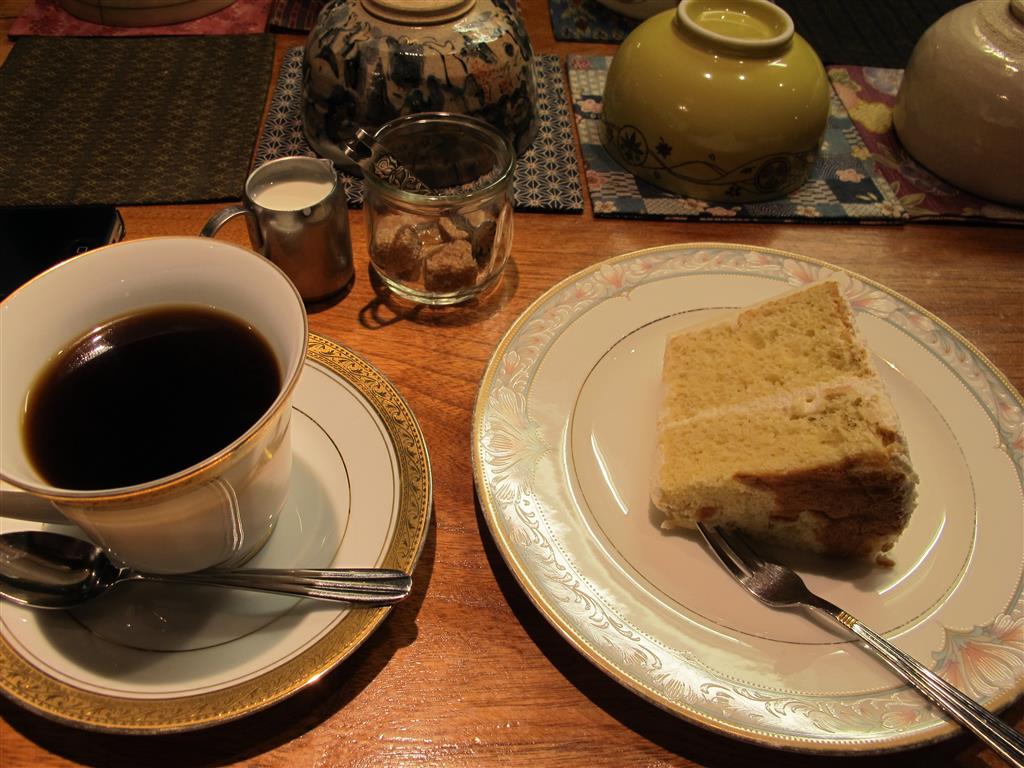 On my visit I had a coffee and cake set for 850 yen. It was a maple chiffon cake, not too heavy and not too light and tasted excellent. 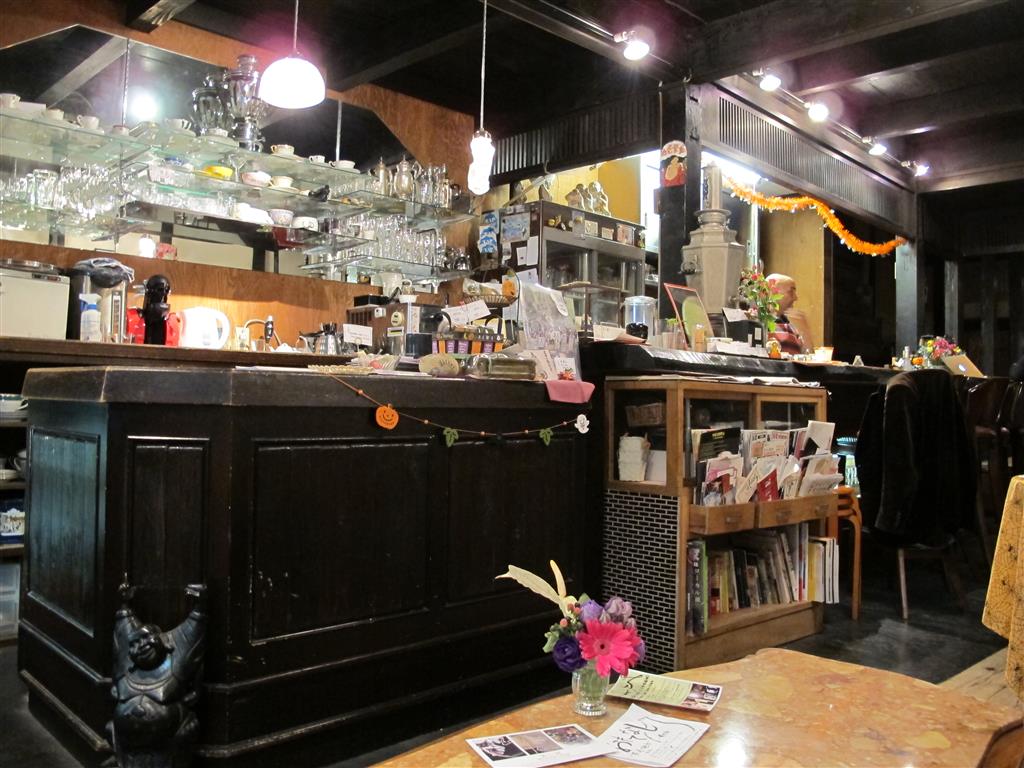 Randy opened the cafe in 2007, after having the building, a traditional wooden townhouse, or machiya, thoroughly renovated. He explained that he was looking for an art-deco, “Taishō Roman” kind of style when decorating the interior. Taishō refers to the Taishō Era (1912-1926), a short period of liberalism in Japanese politics and culture, which in popular memory stands in sharp contrast to the chaotic drive towards modernism of the Meiji Era that preceded it and the more militaristic early Shōwa Era that followed.  “Roman” is short for romantic, so essentially Taishō Roman stands for a kind of vintage romance. 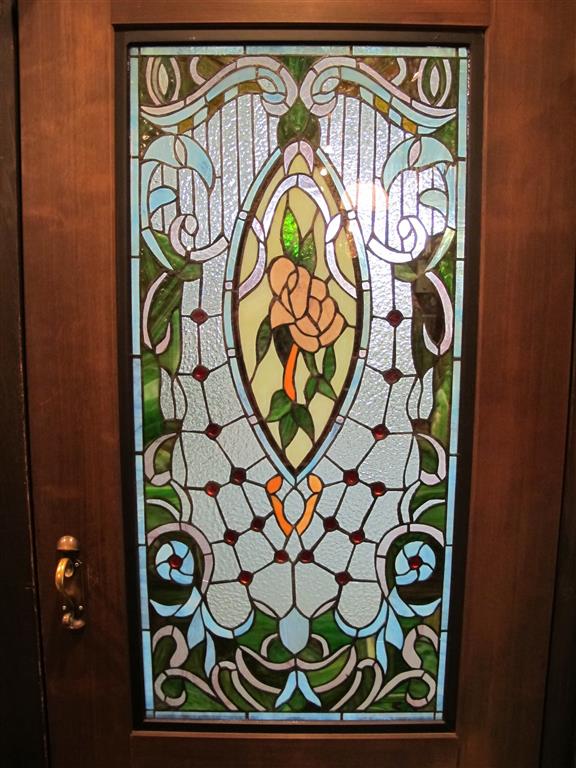 The stained glass doorway above was found for him by our old friend Rob Mangold. 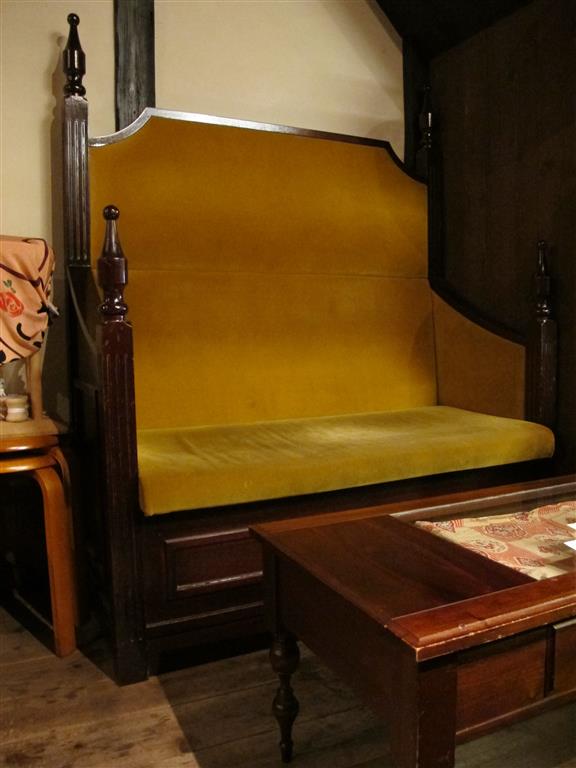 Take a pew – the seating above was originally from a church! 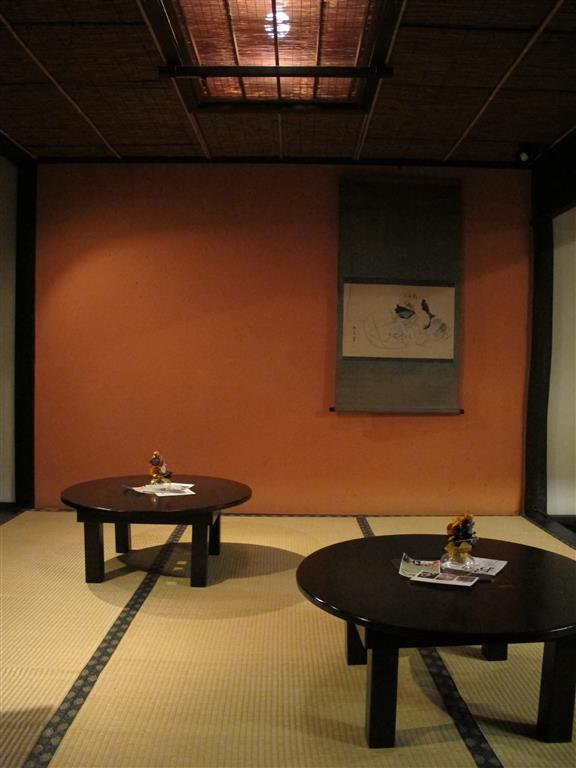 Or if you prefer you can kick off your shoes and relax on a tatami floor. 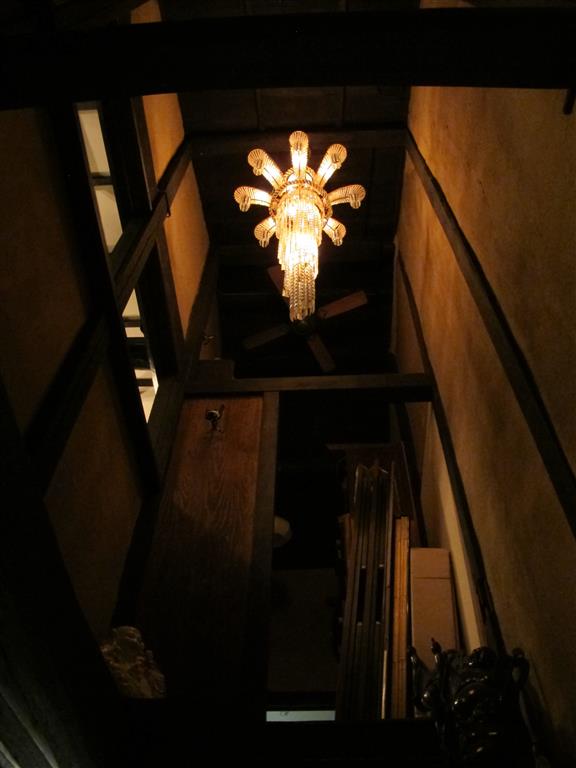 Randy has decorated the machiya very nicely with some lovely items. Check out that beautiful chandelier. 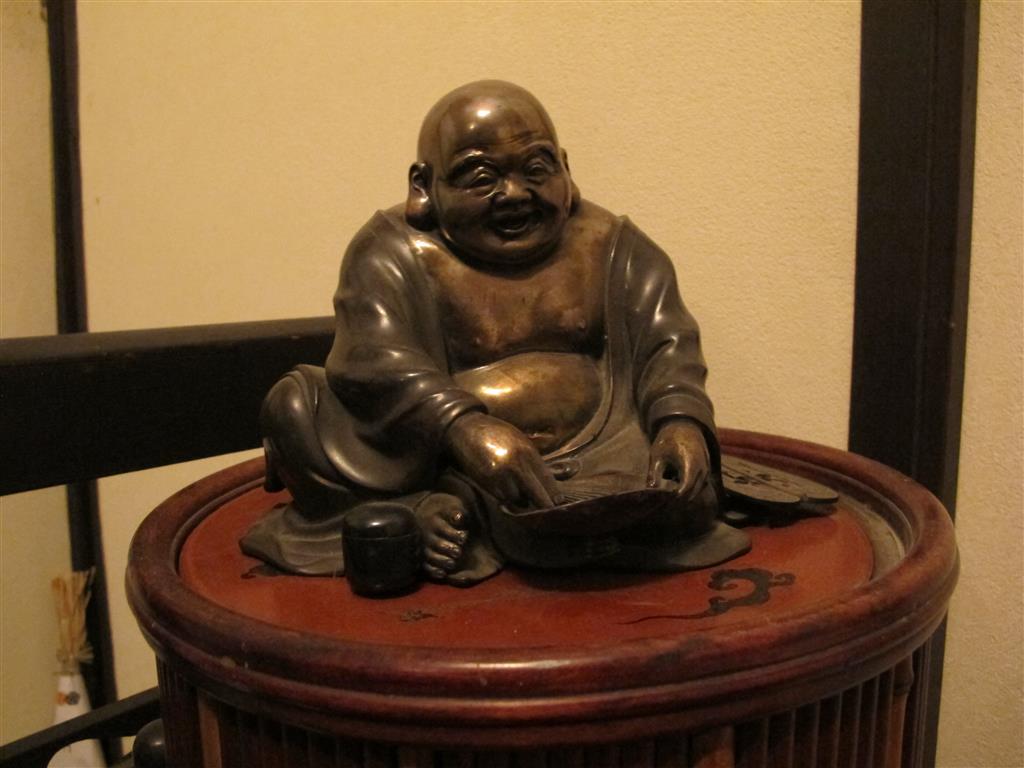 The Ran of  Ran Hotei is from Randy’s name and the Hotei comes from the popular figure above. Randy has an extensive collection of Hotei statues and images, over 3000, but the one above he tells me, is his “treasure”. Hotei is a folkloric figure representing contentment and generosity. 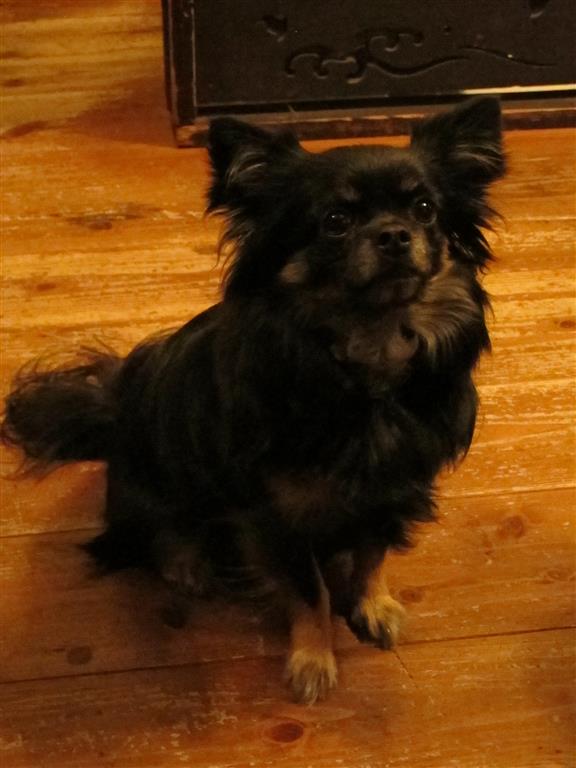 Plus points: Ran Hotei is non-smoking and it is also officially a “Dog Cafe” meaning you can pop in here after taking Rover out for walkies. If you are lucky, you may get to meet Snow, above, so named because she is black (?), but perhaps also because she is すなお, a very calm, gentle natured dog. 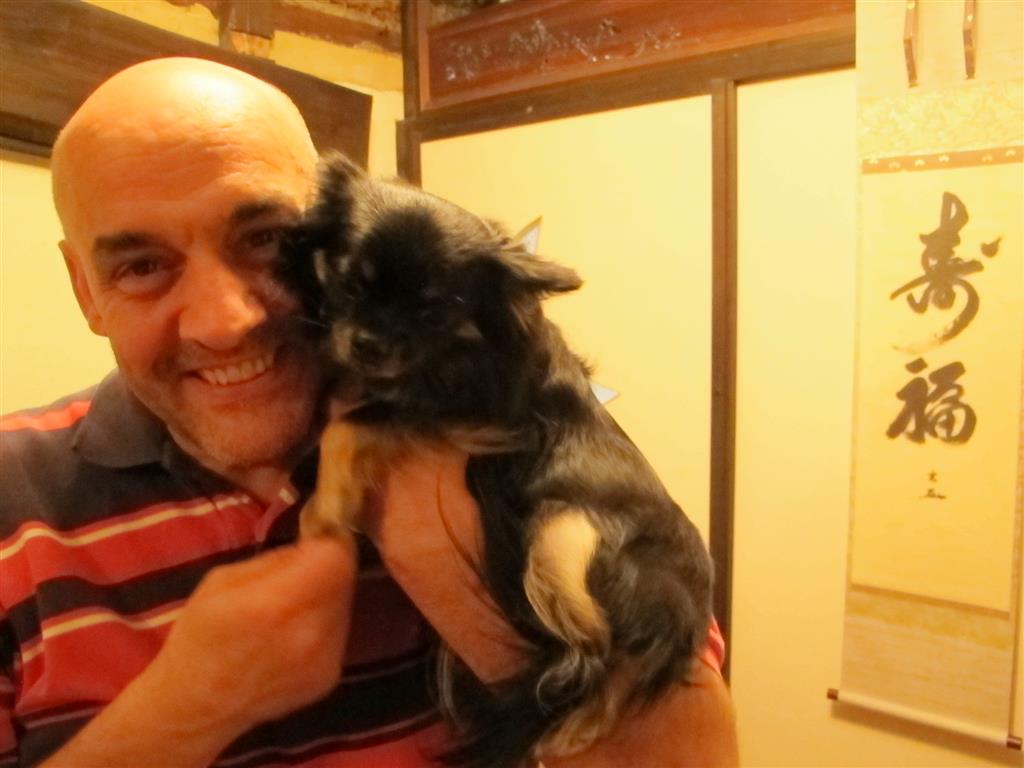 Randy is a very welcoming and friendly chap and he has been in Kyoto long enough to have a few stories under his obi. Before he was a tea master, he was a practitioner of various martial arts. I was very glad to meet him and am looking forward to getting to know him better. Mostly though I just want to go back and have another piece of that cake.

Ran Hotei is situated on the south side of the Sanjo Arcade which lies between Horikawa and Senbon Streets. Here is a MAP.