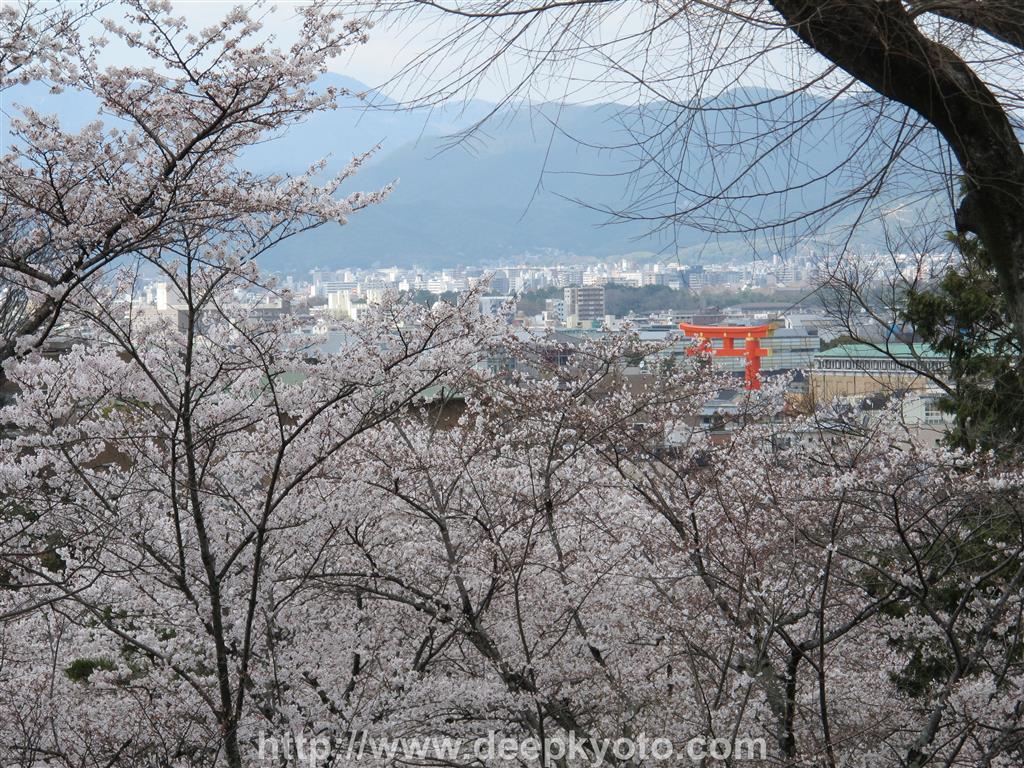 Just over a year ago I took a walk in Okazaki just before the cherry blossoms bloomed, and recorded my thoughts for the book Deep Kyoto: Walks. I was primarily focused on the architecture of the area, a lot of which dates from the Meiji era. Throughout my walk though I was very conscious of those cherry blossom buds which were “just about to pop”. So a week later I went back and took some pictures of the same area with the trees in full bloom. Here is a short excerpt from that original walk and some of those later photographs. At this point, I have just departed from the the Lake Biwa Canal Museum…

Excerpt from Red Brick and Sakura by Michael Lambe

I head west along the Shirakawa canal, which carries water not from Lake Biwa but from Kyoto’s eastern hills. Pink banners wave in the breeze advertising sakura viewing boat trips, though the sakura itself has yet to bloom. Of this I am glad for I’m sure the area will be packed with tourists once the blossoms are out…

…Turning right I cross a bridge, pausing to look back down the canal towards the eastern hills. Yes, another day or so and the cherry trees along these banks will be spectacular. People will come from all over Japan to see them, and rightfully so. Even though much of old Kyoto has been lost, it is still the best city to view the cherry blossom. Somebody said that in a documentary once. I think it might have been famed movie director Nagisa Oshima, but this was way back in the early 90s and I wasn’t taking notes. The point is, that was when the idea of Kyoto, as a city of sakura, first entered my mind. It made a big impression on me. How wonderful it would be, I thought, to see that for myself. Imagine my delight when I first visited this city and the sakura chose the very day of my arrival to bloom. Such a blessing, and yet I still wasn’t satisfied. One can never be satisfied by cherry blossom. Legendary haiku poet Matsuo Bashō famously wrote “Even in Kyoto… I yearn for Kyoto”. I might add, even when I see the cherry blossom, I yearn for cherry blossom. So beautiful, yet flowering so briefly, even as we enjoy their splendor we are conscious of their imminent loss. The joy of their flowering contains a hidden seed of grief. But you cannot grasp it. To stand beneath a cherry tree and gaze into the billowing clouds of sakura above is to feel your soul being pulled out of you by the infinite regression of those heavenly petals. I wonder it does not drive people mad.

I move on, north past the giant red tori gate on Jingū-michi… …where the great shrine of Heian Jingū sits like a proud bird. This red and white structure with its green tiled roofs appears to be a typical example of traditional Kyoto architecture, but actually it too is a Meiji era building. As part of the general drive to revitalize the city, it was decided in 1894 to build this shrine as a smaller scale reconstruction of the Chōdōin, part of the Imperial palace in Heian times (794 to 1185). It would be a proud symbol of the city’s Imperial heritage, a declaration to the world that even as Kyoto moved forward into the modern age it yet kept one eye on its past. I step through the entrance into the shrine’s vast grounds. No matter how many times I visit it stuns me to think that this is but a fraction of the scale of the Heian era original. I walk across the grounds to the main hall, wash my hands, throw a coin and say a prayer – this time for the continued prosperity of my adopted city. On my way out I notice some pink sakura-colored omikuji fortune slips tied to some trees to the left. I briefly toy with the idea of buying one, but no. I’ll write my own fortune and with my own words.

Michael Lambe is from Middlesbrough in the North East of England. He moved to Japan in 1997 and has lived, worked and studied in Fukushima, Saitama, Tokyo and Kyoto. He has been writing the Deep Kyoto blog since 2007 and doing odd jobs for Kyoto Journal since 2009. He is the Chief Editor of the Deep Kyoto: Walks anthology and has written articles for Japan Today, Morning Calm, and Simple Things magazine.