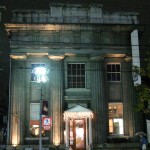 Update: Sadly, I visited this restaurant today and found that it had disappeared and been replaced by a dreadful souvenir shop. Thankfully the fine historic building still stands but this particular branch of Second House with its delicious pasta and fine Italian beer is no more. (May 13th 2011). Last night I took refuge from the rain at the Second House restaurant on … END_OF_DOCUMENT_TOKEN_TO_BE_REPLACED

There's a Scottish pub in north Kyoto named antighseinnse (a.k.a. Horie's Bar). The name (pronounced "an ti shayn jay" I think) is Gaelic and means simply "Inn". The owner Toshiyuki Horie named it after a favored pub on the isle of Islay in Scotland and still proudly wears a T-shirt celebrating "The best pub in Portnahaven". Horie-san, a self-described whisky otaku or geek, … END_OF_DOCUMENT_TOKEN_TO_BE_REPLACED