A few weeks ago I had the good fortune to meet and spend some time with the artist Daniel Kelly.  After meeting by chance in Tadg’s one night, Daniel invited me over to his studio in northern Kyoto to get to know him and his work. Upon arrival one Saturday evening, I was immediately accosted by his gorgeously beautiful but extremely cheeky collie Max. I’m a bit shy around dogs I’m unfamiliar with (people too actually), and noting this Daniel told me, “Dogs like to establish a pecking order. If you don’t show him who’s boss right away, Max will walk all over you.” Sure enough it wasn’t too long before Max was vigorously humping my leg and Daniel was chasing him off with some choice but good-natured curses. Now it’s a truism, but oftentimes people and their pets bear a certain mutual resemblance. Not that Daniel ever tried to hump my leg of course (!) but like Max he is both playful and provocative, and he has a mercurial energy and wild spontaneity about him that makes spending a few hours in his presence a whole lot of fun.

Case in point; no sooner had I arrived than Daniel was suggesting we go and visit his friend’s house and shortly thereafter I was puffing and panting behind him on my bicycle as Daniel zipped through the streets up towards Kita-Tenmangu and beyond that to the house of his friend Rob Mangold. Rob has been renovating an old ryokan there and working on transforming what was once a dilapidated building fit only for demolition into a fine, graceful house that will soon become his family home. Daniel, his eyes shining, moved from room to room, uttering superlatives at Rob’s work and was obviously thrilled at seeing the work of a real craftsman. Nothing seems to make Daniel happier than the work of others if it is executed well. Again, later on back at his studio we watched John Stewart announce his “Rally to Restore Sanity” and Daniel exclaimed with evident joy, “That’s art! What those guys are doing is art!”

A descendant of Manx-Irish miners, Daniel Kelly was born in Idaho, the U.S.A.  in 1947 (a number rendered meaningless by a personal encounter with this youthful spirit). He first gained his love of materials and texture from his father a marble and tile setter, and then went on himself to study the arts and crafts of painting, wood block printing, lithography and collage. Daniel first came to Kyoto in 1977 and over the years has become well known for his unique takes on traditional Japanese imagery; fish, lanterns, ceramics, misty landscapes, and beautiful tatooed ladies. Recently he has published a retrospective of his work and he was kind enough to give me a signed copy. With a foreword by Banana Yoshimoto, an essay on his work by Hollis Goodall, and a complete catalogue raisonné of his prints from 1977 to 2009 this book is a very fine introduction to his work – and I shall treasure it. Looking at the prints and paintings in the book though, cannot compare to seeing his work up close and personal as I did in his studio that day.

Take the self-portrait “Selfish” for example. Unless you view it in person you cannot experience the physicality of this sculpture/painting as it looms out of the wall at you and thrusts itself in your face. Neither can you appreciate the textures and surfaces of the materials used to sculpt the panel behind the painting.

You see, typically, Daniel’s paintings aren’t just paintings. Under the seemingly realistic surface of the image there often lies a vibrant abstract collage of jostling materials: rough textured Nepalese paper, tatami matting, bamboo and wood. At University Daniel studied the psychology of perception. It makes sense. His work definitely plays tricks on you and messes with your sense of space. Mostly however, an encounter with the exuberance of either the man or his art leaves you with a deep impression of joy.

Back in his studio Daniel put on some music and began to dance happily across the floor. As I listened to Mose Allison singing “My brain is always ticking” it struck me that this could almost be Daniel’s very own theme tune. In conversation he is fascinated by everything; art, music, history, comedy… And he clearly enjoys his own life and work just as much as he does the work of others. Banana Yoshimoto wrote about him that he is both “serene within his core self” and “at the same time in perpetual motion, like a small child”. Daniel affirmed this, “Of course!” he said, “If that weren’t true then none of this would have been possible!” And he is very happy particularly  with his life right here in Kyoto too. Earlier as we cycled through the city, I caught up with Daniel at some crossroads. He looked about him and then at me and sighed. “Isn’t it great?” he asked me and then with heavy emphasis, “I love Kyoto.” Not bad for man who has lived here for 33 years. Not bad at all.

Daniel actually has an exhibition coming up in Tokyo very soon, so if you get the chance I’d very much recommend you go and see it.  It will make you happy. Here are the details: 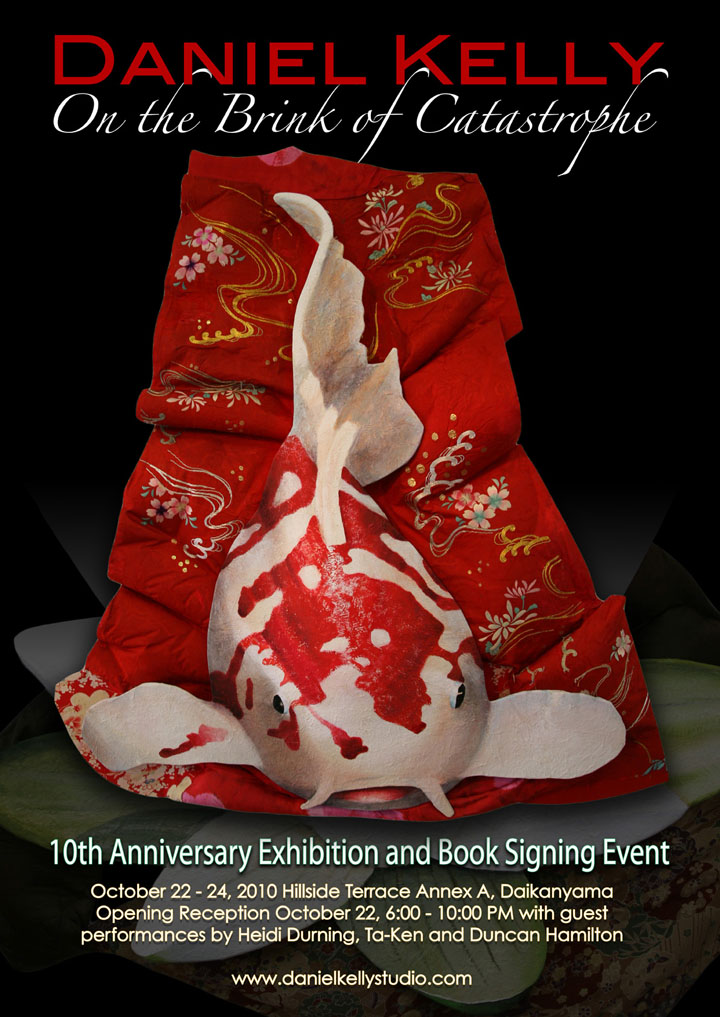 There is a map to the exhibition space here. If you would like to learn more about Daniel and his work take a look at his very impressive website. There are a lot of good things up there…

The book Daniel Kelly: An American Artist in Japan is available from amazon.co.jp