The vacant space of the garden, like silence, absorbs the mind, frees it of petty detail, and serves as a visual guide -a means for penetrating through the “realm of the multitudes.”
-from “Stone Garden” by Will Petersen. 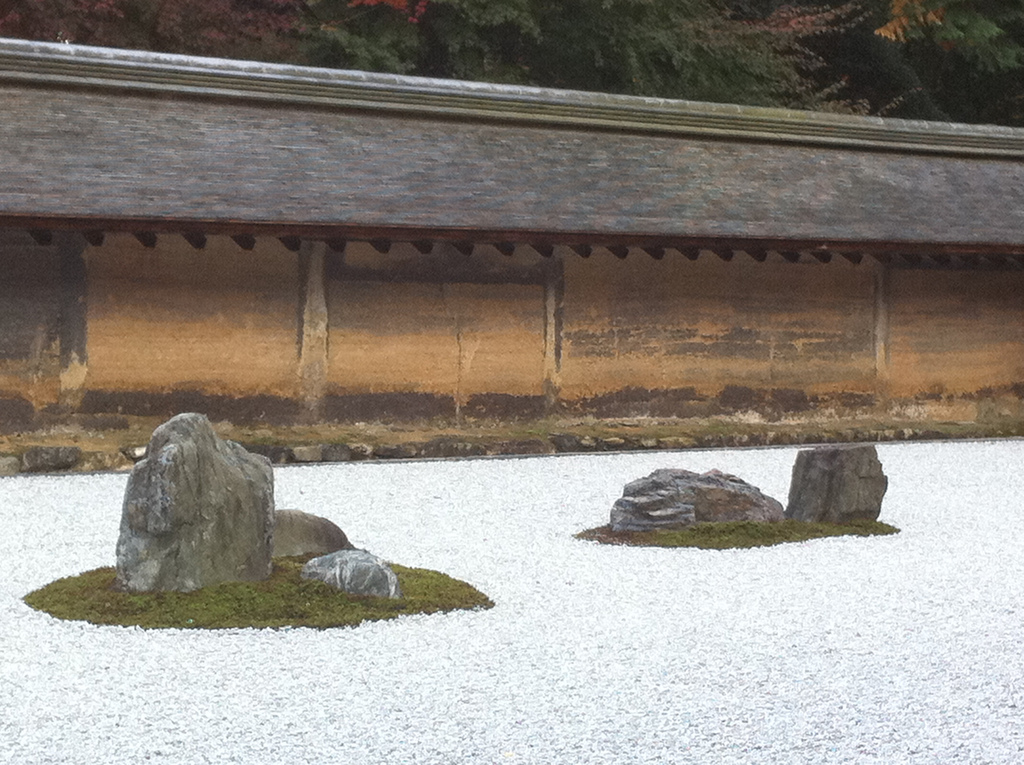 My friend Chris Carver, recently lent me a copy of Jack Kerouac’s The Dharma Bums and fairly early on in the book I found something, or rather someone, of interest. Kerouac’s alter ego, Ray Smith, is hanging out at his buddy Japhy Ryder’s house when this someone walks in…

…Rol Sturlason, a tall blond goodlooking kid, came in to discuss his coming trip to Japan… This Rol Sturlason was interested in the famous Ryoanji rock garden of Shokokuji monastery in Kyoto, which is nothing but old boulders placed in such a way, supposedly mystical aesthetic, as to cause thousands of tourists and monks every year to journey  there to stare at the boulders in the sand and thereby gain peace of mind. I have never met such weird yet serious and earnest people. I never saw Rol Sturlason again, he went to Japan soon after, but I can’t forget what he said about the boulders, to my question, “Well who placed them in that certain way that’s so great?”

“Nobody knows, some monk, or monks, long ago. But there is a definite mysterious form in the arrangement of the rocks. It’s only through form that we can realize emptiness.” He showed me the picture of the boulders in well-raked sand, looking like islands in the sea, looking as though they had eyes (declivities) and surrounded by a neatly screened and architectural monastery patio. then he showed me a diagram of the stone arrangement with the projection in silhouette and showed me the geometrical logics and all, and mentioned the phrases “lonely individuality” and the rocks as “bumps pushing into space,” all meaning some kind of koan business I wasn’t as much interested in as in him…
– from “The Dharma Bums” by Jack Kerouac

I was curious about this character of Rol Sturlason. Who was he and what became of him, I wondered. A quick search and I found that Jack Kerouac based the character of Rol Sturlason on Will Petersen, an artist and poet associated with the Beat Generation, who lived in Kyoto for eight years. There he followed his passions in art, printmaking and Noh drama. In 1957 he published a famous essay on the garden at Ryoanji named “Stone Garden”  in the Evergreen Review. It makes for quite an interesting read, especially if you are familiar with Rol’s brief appearance in The Dharma Bums. It even includes the very diagram that Rol showed Ray Smith in the passage above.

Petersen sees the stone garden as a endlessly fascinating puzzle; “a visual koan“. He points out that because of the walls that enclose it on three sides, the garden can only be viewed from a single vantage point. This focus, he says, “suggests the garden’s purpose as an object of contemplation” but we are not encouraged to study the transitory nature of life here, for there are no “blossoms to fade and no leaves to wither and fall”. Instead its simplicity: “fifteen rocks -of various sizes and shapes… on a flat rectangular area of raked white sand”, guides our mind into a purer meditation on the abstract relationship between emptiness and form. “The garden,” he says, “like all things is not unchanging. But what significant changes do occur, occur not within the garden, but in the mind of the viewer and in his perception of the garden.” 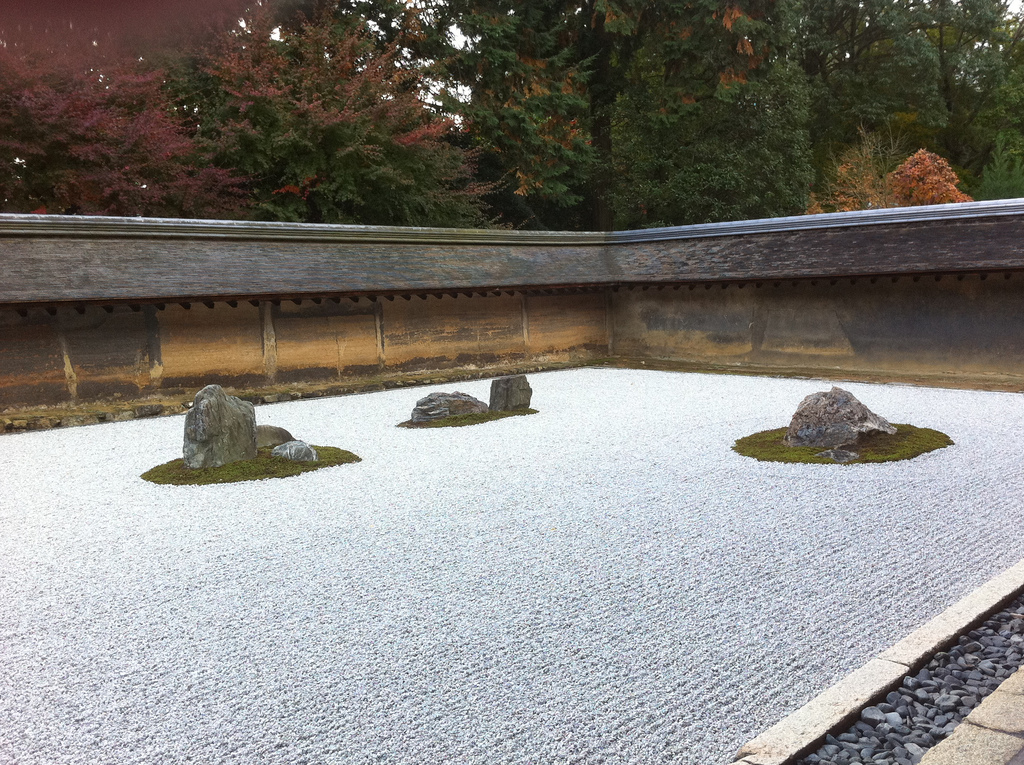 Ultimately the garden must be viewed as art, and viewed in silence. As a silent sermon it raises many questions, but asks for no answers. It calls to mind the flower held before his disciples by the silent Buddha, which brought forth no classification, description, analysis or discussion, but only the comprehending smile of the clear-seeing.
-from “Stone Garden” by Will Petersen.

I have given you just a taste of Petersen’s essay here, and in these pictures I have only given you a hint of what the garden at Ryoanji has to offer (remember there are fifteen rocks). If you find your interest has been piqued, then you should both read the full article and view the garden for yourself. “Stone Garden” was published in the Evergreen Review Vol. 4 in 1957. This issue is available as a downloadable pdf here for a humble $2.95. Kerouac’s The Dharma Bums

is available from amazon.co.jp

Ryoanji is situated in the north-west of the city near to Kinkakuji. There is an access map on the Ryoanji website. Check the city bus travel map for the buses that go out there, or splash out on a taxi. You could also go by bicycle if you have enough energy. It’s uphill all the way but an excellent workout!