Visions of a Torn World 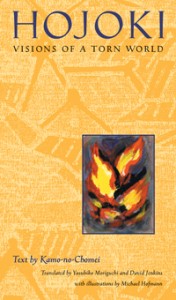 To understand
the world of today,
hold it up
to the world
of long ago.
– Kamo-no-Chomei The Hojoki

The recent tragedy in northern Japan has brought to the forefront of all our minds just how vulnerable these islands are to natural disaster. Here in western Japan, even as we assure our friends and families overseas that we are safe, we know full well that it could just as easily have happened here. Historically, such tragedies have occurred many times across the archipelago and no doubt they will again. Clearly we should remember this and prepare ourselves accordingly. Kyoto too has been visited by more than its fair share of catastrophes in the past. Can we learn anything from the experiences of our forebears that can help us to manage this current trauma?

One Kyoto resident who witnessed all too many disasters in his life was the poet Kamo-no-Chomei. Born in 1155, he lived in a time of political turmoil and war, but it was man’s vulnerability to the forces of nature that most greatly affected him. In response to disaster he fled, not from Japan, but from “the world” of city life and into nature, where he lived alone in a little hermitage. Written in 1212, his great work The Hojoki is literally “An Account from a Hut Ten-Foot Square”. It is a poem in three parts. In the first he describes the calamities he has witnessed in his lifetime. The second part is a short meditation on the human condition. The third part is an account of his simple life of non-attachment in the mountains. From his forest refuge he looks back on his life and tell us,

In the forty years or so
since I reached the age
to understand the heart of things,
I have witnessed
many awful happenings…

He then writes personal accounts of tempest, fire, flood, famine, and plague, but of all these it was the earthquake of 1185 he described as “the most terrifying of events”. His description resonates powerfully with us today:

Mountains fell
and filled the rivers.

The seas heaved
and flooded the land.

The earth itself split
and water gushed out.

Giant rocks cracked
and rolled down
into the valleys.

Boats along the shore
were helpless in the waves.

….Around the capital
not one temple or pagoda
remained intact…

Outside the ground was torn apart.

Without wings
you could not fly away.
Only a dragon
may ride the clouds!

In this first part, Chomei, introduces the Buddhist concept of mujo or impermanence. Man and his dwellings are compared to floating bubbles on a stream that appear and vanish in a moment. Disaster is seen as the great leveler. We see a whirlwind render property boundaries meaningless:

It flung down fences
so that one plot of land
merged with the next.

And nobody whether rich or poor can feel secure:

So many bodies of the starved
lay in the streets
hard by the walls of houses.

He tells us that in Kyoto alone 40,000 perished from starvation and still more in the provinces:

Throughout, the image of the house is repeated as a symbol of man’s folly. Rich or poor we build our houses, raise our families, make plans for the future – but all of this can be swept away in an instant.

All of man’s doings are senseless
but spending his wealth
and tormenting himself
to build a house in this hazardous city
is especially foolish.

So what then should we do? In the second part, Chomei ponders this. No matter your rank in society, rich or poor, high or low, each level has its own inherent anxieties.

Men of means
have much to fear.

Those with none
know only bitterness.

And as we have seen no amount of wealth can guard against the forces described above. In such circumstances, what would a wise course of action be?

…where should we live?
And how?

Where to find
a place to rest a while?

And how bring
even short-lived peace
to our hearts?

The third part of the book, constitutes, Chomei’s personal attempt to answer these fundamental questions and find that short-lived peace.

In truth, it was not only fear of catastrophe but personal circumstances that drove Chomei out of the city and into seclusion. Chomei had been born into a prominent priestly family. His father was a master of one of the Shimogamo sub-shrines and if Chomei had been more adept in his dealings with the powerful, including members of his own clan, he would most likely have inherited that position himself. Instead, Chomei’s lack of political tact put one too many noses out of joint and his fortunes dwindled accordingly. Of this he speaks wryly:

The fact is,
I get older,
my houses smaller.

But it couldn’t be helped. Chomei had no time for the false friendship of court relations:

In their friends
people like to see a certain affluence
and the ready smile.

They seldom care for
warmth and truthfulness.

So why not find your friends
in song and nature?

And so in his fiftieth year, Chomei retired from the world, became a Buddhist priest and built his first hermitage in the woods near Ohara. Four years later he moved to Hino near Uji and built an even smaller shelter. This ten-foot square hut was designed to be easily dismantled and moved and his possessions were few: a few sacred images, two musical instruments (a koto and a biwa), some texts of music and poetry, and the Lotus Sutra. He furnished it with a simple space for a brushwood fire, some shelves and a bed of bracken.

His account of his life there begins solemnly enough as each season seems to bring to mind some grave moral lesson. The wisteria in spring come in “holy purple clouds”, the call of a summer cuckoo is a guide on the road to death, autumn cicadas seem to grieve for this “husk of a world” and winter snow, settles “like human sin and melts in atonement”. 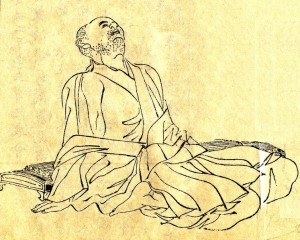 However this mood soon passes as he is seduced by the pleasures of solitude and simple country living.

When in no mood for chanting
nor caring to read sutras
I can choose to rest.

I can be lazy if I like –
no one here to hinder me,
no one in whose eyes
to feel ashamed.

A little boy of ten, the son of a woodsman, sometimes visits and he appreciates this honest companionship. Together they enjoy rambling through the countryside.

When the day is fine
we climb to the hilltops
and look at the sky
above my former home.

A place of beauty
has no owner.
So there is nothing
to spoil the pleasure.

Mostly though he lives a life of perfect seclusion:

When deer from higher up
come tamely down to me
I realize how far I am
from the world.

And from this life of withdrawal and austerity he gains a kind of straightforward wisdom. Instead of hiring a servant to work for you, “Why not be your own servant?”

When there is something to be done
employ your body.

…When you need to go somewhere
use your feet.

“I wish for nothing” he tells us,

Quiet is my only wish
to be free from worry
happiness enough.

And though he makes it clear that he does not suggest this lifestyle is for all:

I just compare
my past life
with the present.

It does seem that he has at last found for himself some peace of mind and happiness:

I love my lonely dwelling,
this one room hut.

Yet, Chomei could not escape the world of attachment completely because being human, he carried the world within him. At night he recalls his former friends and weeps. When he hears the cries of pheasants “they sound just like my father and mother”. When the rain falls, his former fears return and he hears it as a storm. And then he begins to wonder, is the love he bears for his little hut, itself a sin?

Buddha taught
we must not be
attached.

Yet the way I love this hut
is itself attachment.

He ends the poem in a stern self-examination:

You left the world
to live in the woods,
to quiet your mind
and live the Holy Way.

But though you appear
to be a monk
your heart is soaked in sin.

…Has your discerning mind
just served to drive you mad?

“To these questions of mind” he admits, “there is no answer” and so the lonely hermit and his poem lapse into silence .

And yet, despite his self-doubts Chomei does teach us something from his own experience. “Reality,” he tells us “depends upon your mind alone”. If we look at the structure of the poem, we can see that the first part depicting a world of limitless terror and grief, and the third part of simple peace and non-attachment are linked by the second section of mindful questioning. This, the mind, is the hinge on which swing two separate mirrors or lenses upon the world. In the first the elements of wind, fire, water and earth are seen as threatening and destructive. In the third these same natural forces are perceived more gently, as “autumn breezes”, and “flowing water”, the embers of his fireplace give him comfort, and from the hilltops he enjoys majestic views. But it is not the world that has changed so much as the man and how he chooses to live. As Chomei says, there are no simple answers. Terrible things do happen. But no matter the objective reality, how we choose to perceive our life and fortune and how we choose to act in this moment is up to us. Perhaps if we can maintain that spirit of calm, mindful questioning we can make the right decisions, act rightly and attain in our hearts some short-lived peace.

There is a replica of Chomei’s hut which you can visit in the grounds of Kawai Shrine. This is a sub-shrine of the Shimogamo Shrine complex and the very shrine from which Chomei was disinherited. They have built another larger roof over the hut to protect it from the elements and when I visited recently some workmen were there conducting minor repairs. Ironically, they seek to preserve and make permanent Chomei’s temporary shelter. You can find the Shimogamo Shrine complex a hop, skip and a jump over the river to the west of Demachiyanagi Sation. Here is a map of its location. Kawai shrine itself is on the west side of the semi-no-ogawa stream as you enter the woods of Tadasu-no-mori. Here is a map of the complex. Kawai shrine (河合神社) is on the bottom left.

The Hojoki translated by Yasuhiko Moriguchi and the late David Jenkins with illustrations by the artist Michael Hofmann is available from amazon.co.jp

Those of you who feel inspired by Chomei’s account to get some fresh country air might be interested in the conservation activities of PTO. You can read more about their activities here.

For information on how to donate to aid groups providing effective relief to northern Japan, please click here.

Not mentioned there is that Kyoto City government have begun accepting relief goods in the City Hall and Ward offices. Here are the details:

Open from 9:00am to 5:00pm, except on Saturdays, Sundays and national holidays. Please donate only items with expiration dates at least one month beyond the date of donation.
To make the distribution of the goods more efficient, please pack similar items together, and write the type of item and quantity in large letters on the sides and top of each box. (there is no restriction on the size of the box) Requested items may change from April 4th. They accept only the following goods: