OK, so I didn’t actually meet Harrison Ford, as I wasn’t there on Thursday but if you look real close you can see that what he is looking at on the inside cover of Kyoto Journal #75 is a flyer for the Stop Kyoto Aquarium campaign that I had slotted in the previous weekend. And that makes me happy. Now if he actually signed the petition – that would be something!

I spent most of last Saturday hanging out with Stewart Wachs and Lucinda Cowing. That’s them above just outside the convention center. The first thing we did was watch a big announcement from the government of Palau (possible contender for “Nation with World’s loveliest flag”).

Palau’s EEZ is now a sanctuary for all marine mammals, including whales, dolphins – the hope being to promote whale-watching tourism to boost Palau’s economy. As they only have one patrol boat though, there is some doubt as to how they will enforce this protected area… However, what was really interesting was speculation that in placing so much importance on the value of cetacean life, Palau’s relationship with Japan might also be changing. Keep an eye on how they vote at the next meeting of the IWC.

Then we had (a fabled free) lunch… 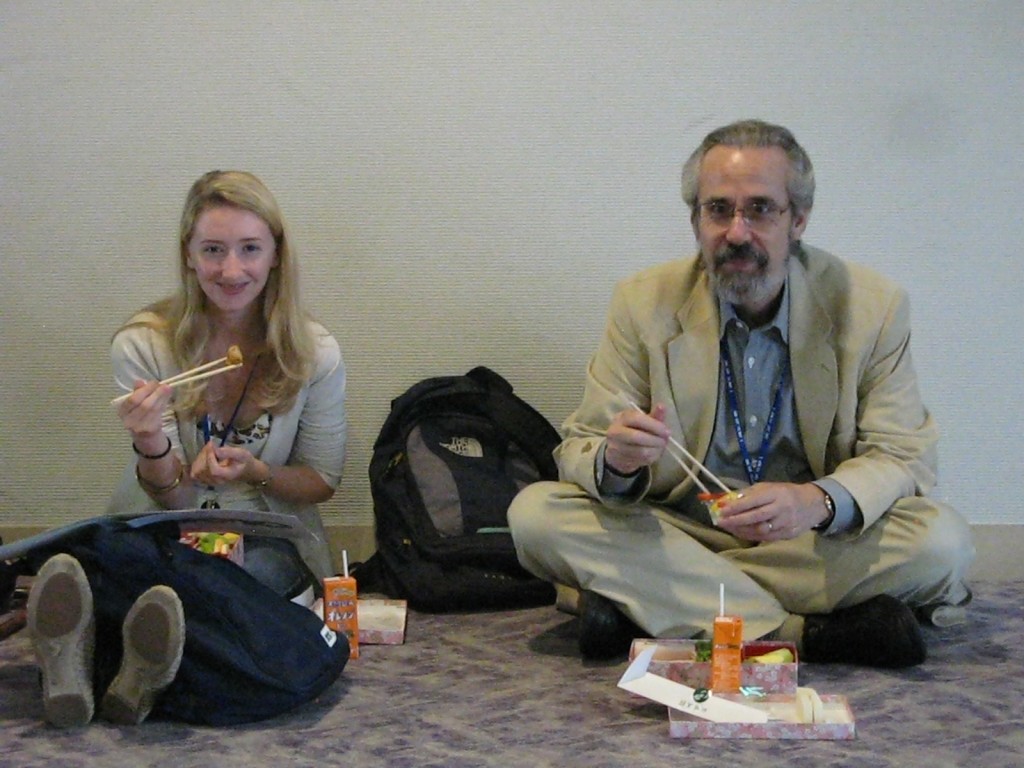 After which Stewart and I had a wander around the Interactive Fair outside the convention center. This was the best part of the day for me; just meeting people and hearing their stories. Naturally the first thing that caught my eye was the Asahi beer tent. 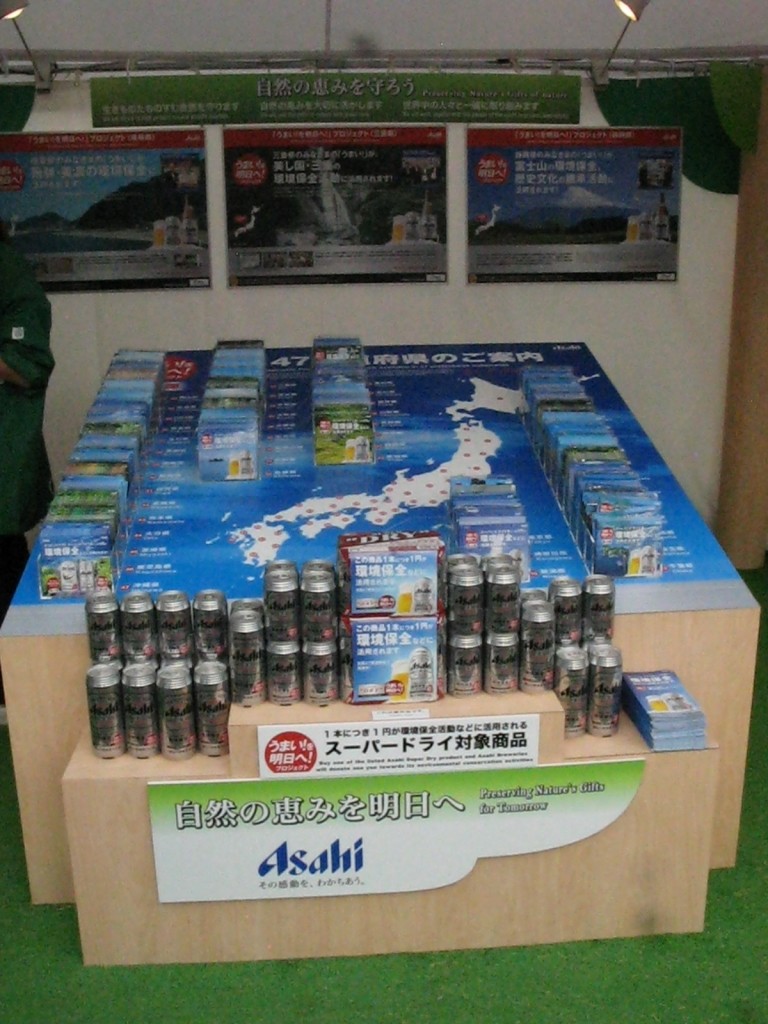 Asahi has brought out a limited edition “Organic Premium” just for COP10 – said the Asahi beer girl. Nothing more than an empty promotional gimmick really and neither Stewart nor I are that keen on Asahi anyway (not unless they are giving it away for free) so after a pleasant chat with the lady on the right, we moved on.

The next bunch of critters we met though really meant business. 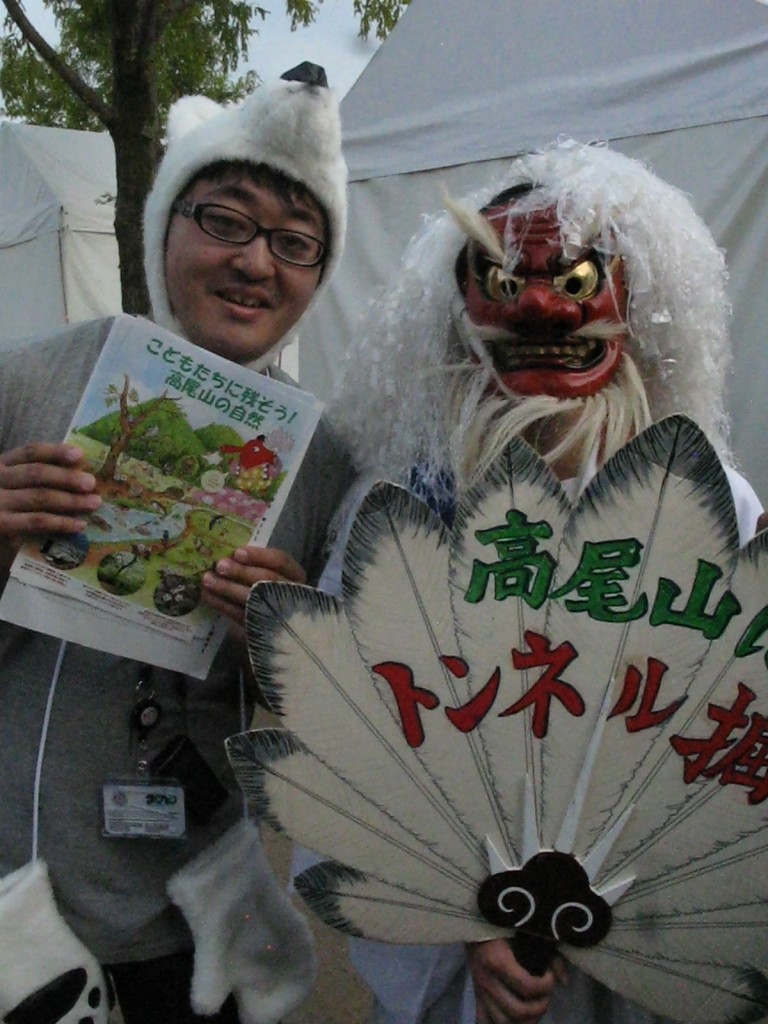 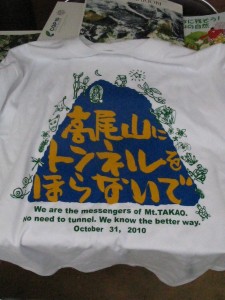 These guys are protesting against the tunnels being built through Mount Takao in Tokyo. Apparently, Takao has as much (or even more) animal and plant diversity as Great Britain – yet much of it is now under threat because of construction of the Ken-Odo Expressway. Though construction is underway and the media pays scant attention to this environmental scandal this group continues to fight the decision in the courts (click here to learn more). I told them about our campaign against the aquarium here in Kyoto and we vowed mutual support. I bought a nice T-shirt too.

Here’s Stewart again with two young ladies from the Nagoya Open University of the Environment (an unprecedented circle of learning ~ the only enrollment requirement is ecology mindedness). They were good enough to give us eco-chopsticks so we gave them a copy of KJ#75! 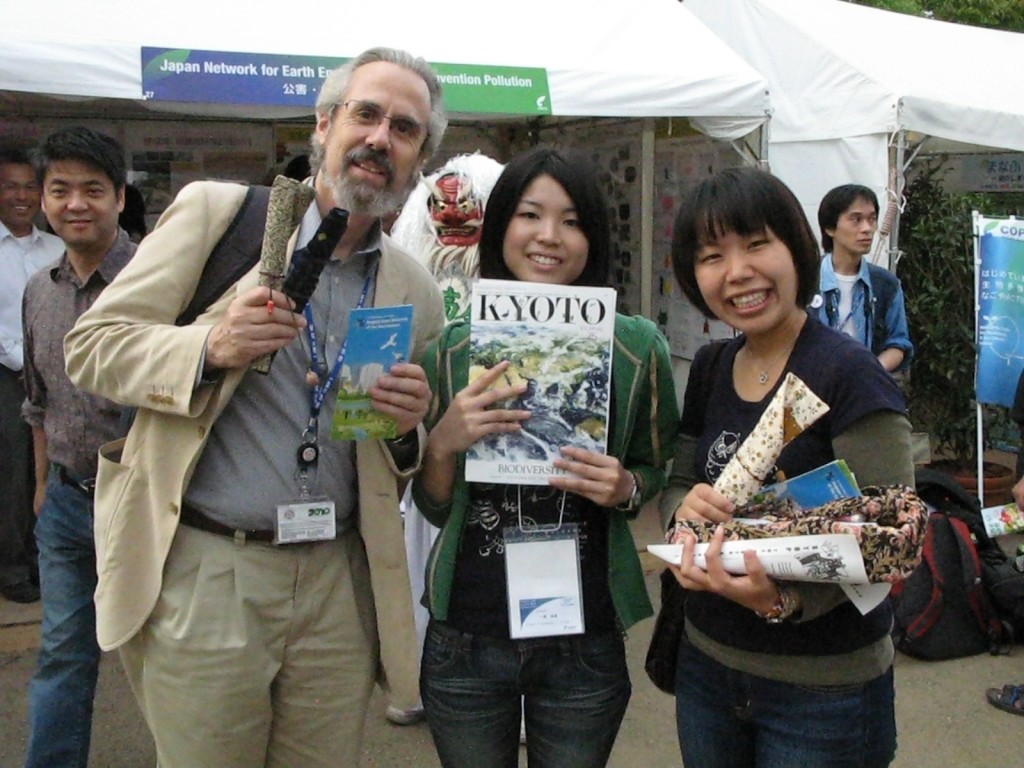 The two young ladies in the next picture came from Korea to tell us about the campaign to stop the Four Rivers Project. 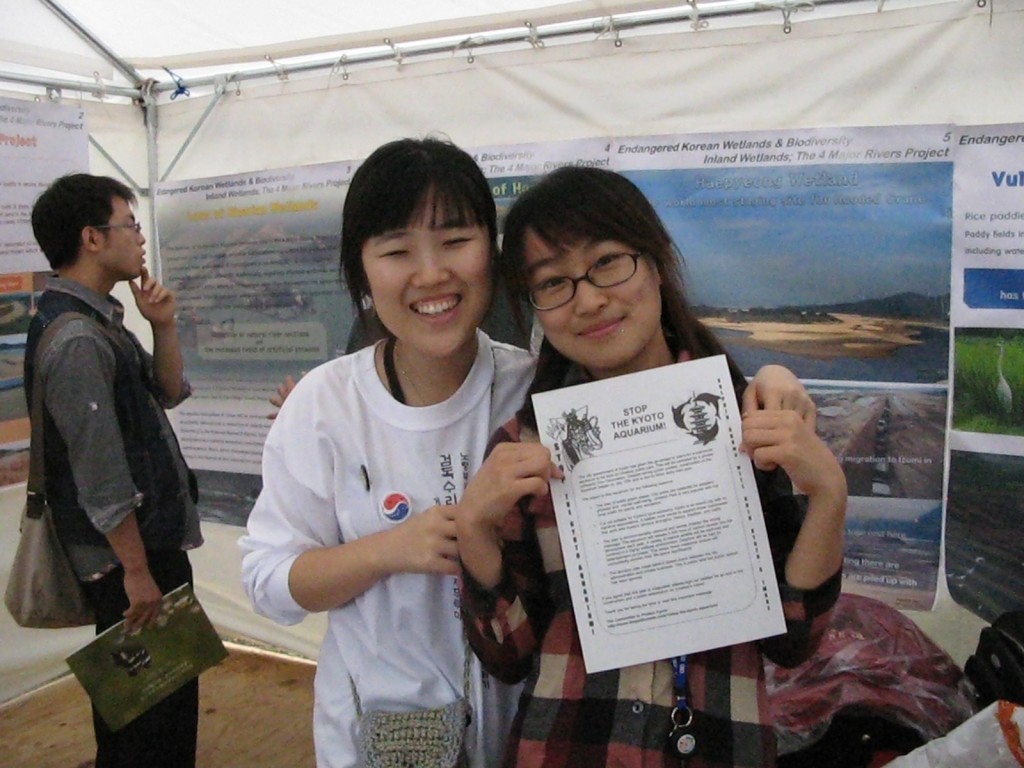 From the Guardian UK:

…the Four Major Rivers Restoration project, which will cost an estimated US$17.8bn by 2012, faces bitter opposition by environmentalists both locally and internationally. It involves building 16 dams on four of the country’s largest rivers, creating five tributary dams, the raising of 87 irrigation dams that are already in place; reinforcing hundreds of kilometres of riverbank and 570 million cubic metres worth of dredging. 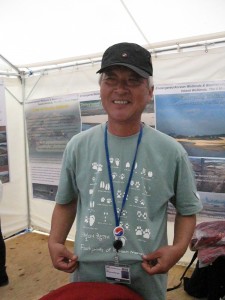 The impact on biodiversity is not fully known as the environmental impact assessment for the project is not reliable, conservationists allege. Wetlands are rich habitats for biodiversity and over 100 of them, including two wetland protection areas, will be affected. Scientists say the Four Rivers project needs to be stopped to avoid destroying more Ramsar sites and their biodiversity. LINK

For more information check http://koreawetlands.blogspot.com or check out the cyberaction here. I showed my support – by buying another T-shirt (!) with some very nice Hangul calligraphy on it, but I really coveted the one the guy on the right was wearing with all the wee paw prints…

The next picture is of activists from Okinawa. Bet you can’t guess what their problem is… 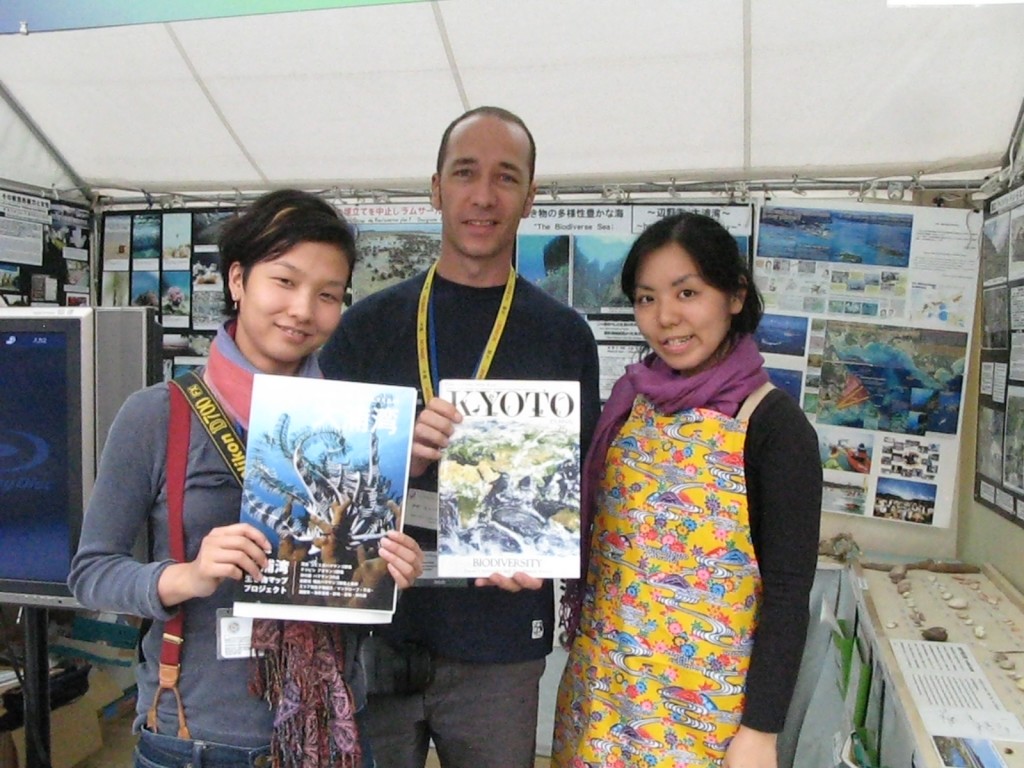 Standing center is Ken Nakamura-Huber, a very nice chap with whom I chatted for quite a long while. He told me he used to sit firmly on the fence when it came to the American base issue in Okinawa. He had friends in the military and just thought it best not to get involved. But as the years passed he just couldn’t stand the injustice anymore. The biodiversity link is of course the issue of what happens to the highly endangered dugongs of Okinawa once there’s a great big military base built on their feeding grounds. The issue has become all the more important with the recent discovery that the dugongs of Okinawa are actually a distinct species. You can read more about the campaign against the Henoko base at Save the Dugong Campaign Center. 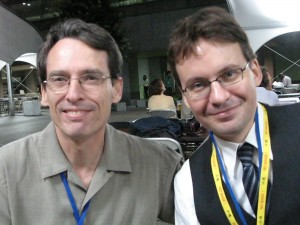 Also among the new friends I made at COP10 is the Canadian environmental journalist Stephen Leahy seen with me here on the left (note the yellow band for Okinawa I’m wearing). Discovering a mutual Irish heritage we slipped into a fascinating discussion on biodiverse potato gardens in Peru. A very interesting man with a lot of stories to tell. I recommend his writing here: http://stephenleahy.net/.

Finally, a picture from the end of the day in an izakaya. Here Stewart is telling Yiddish jokes – one of which still had me laughing days later. If you see him – ask him to tell it. There are more pictures up on flickr here. Enjoy!