…suppose there are immeasurable hundreds, thousands, ten thousands, millions of living beings who are undergoing various trials and suffering. If they hear of this Bodhisattva Perceiver of the Word’s Sounds and single-mindedly call his name, then at once he will perceive the sound of their voices and they will all gain deliverance from their trials. If someone, holding fast to the name of bodhisattva perceiver of the world’s sounds, should enter a great fire, the fire could not burn him. This would come about because of this bodhisattva’s authority and supernatural power. If one were washed away by a great flood and call upon his name, one would immediately find himself in a shallow place… — from the Lotus Sutra Chapter 25 translated by Burton Watson 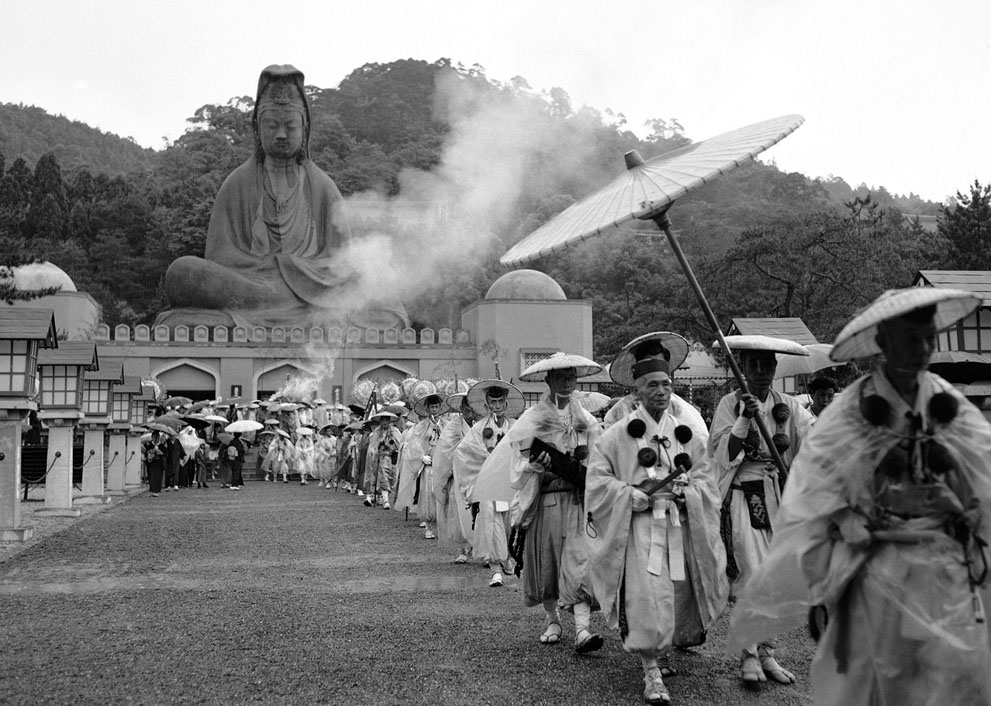 “Some 50 colorfully-garbed Buddhist monks march from the Buddhist goddess of Mercy Statue in Kyoto, Japan on May 11, 1958, after the unveiling of a memorial to Allied dead of World War II on June 8. A white marble tablet, honoring more than 48,000 soldiers who died fighting against Japan, was uncovered in base of the 80-foot-high statue. The Buddha is dedicated to the more than one million Japanese who perished in the war.” (AP Photo)

I found the picture above in a collection of fascinating photographs showing life in 1950s Japan at The Atlantic: http://www.theatlantic.com/infocus/2014/03/japan-in-the-1950s/100697/ It seemed like a timely discovery.

This beautiful lady sits calmly against the green of the Higashiyama hills not far from Kōdai-ji. Here is a MAP to the location. What better time to visit her than now, when many would stir up old enmities between nations? Here you may receive a stick of incense and light it to remember the suffering of our forebears and to pray for forgiveness and peace.

Her name is Bodhisattva Avalokitesvara, or in Japan Kannon (観音).  Paid for by a private citizen, her statue was designed by the sculptor Choun Yamazaki and then erected in concrete and steel by Hirosuke Ishikawa in 1955.  You can actually climb inside the structure. At the back of the main temple is a stairway that leads into the lower body of the statue where you can see a collection of Buddhist statues representing the zodiac year. And to the south of the main building is a memorial hall to the war dead of the Allied forces of WWII. The altar contains soil from  each of the military cemeteries in the Pacific.

What better spirit to invoke to bring peace to both the dead and to the living after the calamity of war?

Kannon-sama is the spiritual embodiment of endless compassion: a bodhisattva (in Japanese bosatsu – 菩薩) who has vowed to free all sentient beings from suffering. Originally a male figure, Kannon Bosatsu is usually depicted as a female figure in Chinese and Japanese iconography, and often cradles a child. Many have noticed the remarkable similarity with Christian depictions of Mary as the Madonna with Child…

This figure’s transformation between genders may same strange, but from the beginning it was written that Kannon Bosatsu can take any form to suit the nature of those who need help. For the salvation of all sentient beings her transformations are endless… Perhaps she is near you now!

And just as Kannon Bosatsu can manifest in many forms, perhaps that spirit can also manifest through you and me. Perhaps compassion can transform us all into people who can bring peace and tranquility to this world.

He of the true gaze, the pure gaze,
the gaze of great and encompassing wisdom,
the gaze of pity, the gaze of compassion–
constantly we implore him, constantly look up in reverence.
His pure light, free of blemish,
is a sun of wisdom dispelling all darknesses.
He can quell the wind and fire of misfortune
and everywhere bring light to the world…
— from the Lotus Sutra Chapter 25 translated by Burton Watson