Gojō Pottery Fair, in which pottery stalls line Gojō street all the way between Kawabata and Higashioji, begins August 7th and continues to August 10th. Simultaneously, in nearby Rokudo-san temple, is Kyoto’s very own festival of the dead, the Rokudo Mairi spirit welcoming festival. Jen Teeter explores both of these events and more in her DKW essay “Time Travelling on Gojō”, so here’s an excerpt to whet your appetite… 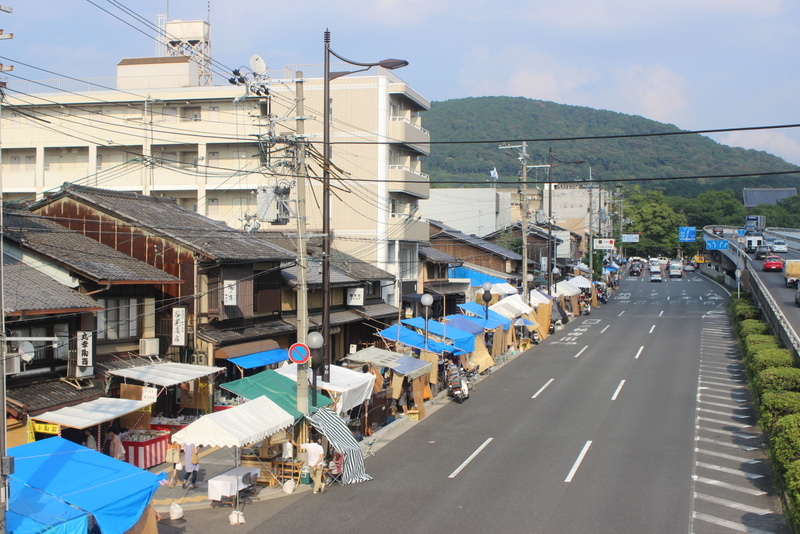 The evening before the festival, potters were meticulously assembling their stalls. Incorrectly, I assumed they were only preparing the skeletons of their tents and shelves so that they could quickly fill them up with their inventory the following morning. When I stepped outside again around midnight, hundreds of unguarded stalls, all filled to the brim with precious pottery, bordered the expanse of Gojō. The sense of trust that people can have for each other here can be so uplifting.

When I set off early the next day, the normally drab pavement had been transformed into a bustling pottery-lover’s paradise. Upon approaching a stall selling clay incense holders, I was astonished at how a piece that was surely worth 5000 yen was going for a mere 1000. The artisan explained how potters looking to clean out their inventories for the next season are willing to part with their creations for a fraction of the original price.

On a mission, I began to weave my way through rows of crystalline Kiyomizu-yaki kettles and charming Shigaraki chawan. My husband had been looking for large ramen bowls for ages, and I found the perfect ones- leaf-shaped and earth-rusted, the sparkling, aquamarine waves of Okinawa flooding the inside.

“If I buy four big ones and four small ones, can I get a discount?”
“No, but I can give you these four sauce holders to complete your set.”

Score! After collecting my winnings, I carried on up Gojō-zaka. At a small side street called Kaneicho, I took a right and it was just as if I had slipped through the rabbit’s hole. Amidst the forgetful cityscape, there stood the wooden self-built home of master potter Kawai Kanjirō.

The unassuming home dressed with an arched, bamboo inuyarai to keep dogs from relieving themselves on the walls, was the first of a whole street of renovated machiya. Two unpretentious wooden rabbits kissing at the front entrance greeted me as I ducked in. Making my way down the hallway, I clumsily took off my shoes, and gave 900 yen to the woman at the counter, who I would later learn was the granddaughter of Kawai.

Wabi and Sabi:
The beauty of poverty,
Ordered poverty.

Kawai’s haiku radiates his artistry and appreciation of wabi – beauty in poverty, and sabi – elegance in simplicity, emphasizing the intertwining of the human spirit with the imperfection of “perfect” nature. The chestnut walls and chairs of his sturdy house give a sense of permanence, reflecting the strong influence of Kawai on his environment.

My eyes immediately turned to the hearth that dominated the center of the home. An image sprung to mind of Kawai and his fellow artisans gathering around the fire for tea on a frosty, winter day. Exemplifying his ability to lure the extraordinary out of the ordinary, Kawai had concocted the stout chairs around the hearth out of wooden mortars for pounding rice. Next to the hearth was a jolly two-faced wooden statue, and as I continued around the first floor, I kept meeting its Janus-faced relatives hidden in corners here and there. One of them was even posed to give me a peck on the cheek.

Around the house curious items are present in unexpected places. In the courtyard, a miniature stone monk collects meager offerings in front of his person, while a dog-sized, beckoning, stone cat balancing coins on its head welcomes guests at the entrance to the giant kilns. These kilns were once fired up several times monthly and shared by twenty different families in the community.

Kawai seemed to have an affinity for the human hand, the female hand in particular. A hand, which must have been severed off of the Statue of Liberty, adorned one of the shelves near the kilns; there were hands with fingers pointing up; and others were holding flowers. A turquoise ceramic figure, with its rising index finger, seemed to embody the potential of human expression.

Returning back inside, I climbed up to the second floor to find a yet another statue of two rabbits kissing, this time cast in bronze. In the drawing room was a giant tree stump-turned-table, its surfaced smoothed by human touch. Two wooden chairs with seats carved perfectly to support the human buttocks, kept the table company. The vitality of the tree from which this chair was forged emanated from the swirly tree rings carefully positioned exactly where the left and right buttocks hit the seat. After a momentary break in the chair, I headed back downstairs.

After bidding farewell to the granddaughter and the spirit of Kawai whose presence reverberated through the home, I headed to Toyokuni Jinja, dedicated to daimyo Toyotomi Hideyoshi . Taking a left I followed the street lined with pottery-filled machiya, passed the stone with the “Don’t pee on me” sign, and turned right at the dilapidated machiya at the end of the row. Down the hill at the next intersection adorned with cigarette machines, I headed south until I arrived at the wall which forms an impressive, stone perimeter around Toyokuni Shrine. Covered with moss, and almost twice my height, I could not imagine how people had managed to schlep the Goliath stones to the temple, let alone assemble them as if they had been forged together by fire. As I was about to ascend the stairs to the shrine, a huge, grassy hill crowned with a granite statue attracted my attention.

Children playing on teeter-totters ignored me as I pulled myself up to the sign in front of the hill. Mimizuka or “Ear Hill” (originally Hanazuka or “Nose Hill”). What on earth could that mean? 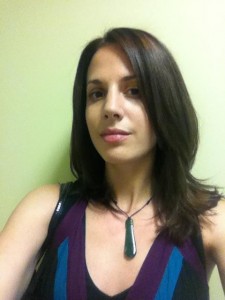 Jennifer Louise Teeter is lecturer at Kyoto University in Japan. Born in a suburb of Chicago and having lived in Japan for 12 years, she serves as the Media and Campaigns Coordinator for Greenheart Project which is developing an open source hybrid sail/solar cargo ship tailored to the needs of small island developing states while volunteering as an editor for the Heartwork section of Kyoto Journal (www.kyotojournal.org). She blogs with two other women at Ten Thousand Things (www.tenthousandthingsfromkyoto.blogspot.jp). She is also a “singer in a rock-and-roll band,” called the Meadowlarks.