This month we have two extracts from Deep Kyoto: Walks. Both are from my own piece on a musical tour of Kiyamachi bars conducted by my good friends Mark (Max) Dodds and Ryotaro Sudo in late November last year. On Saturday November 29th 2014 Max and Ryotaro will again perform this tour for the tenth and final time, so a couple of short excerpts from my account seemed timely. In the following passage we have reached Tadg’s bar, and the musicians and the audience are all having a splendid time when suddenly a song of Max’s induces a mood of wistful reverie… 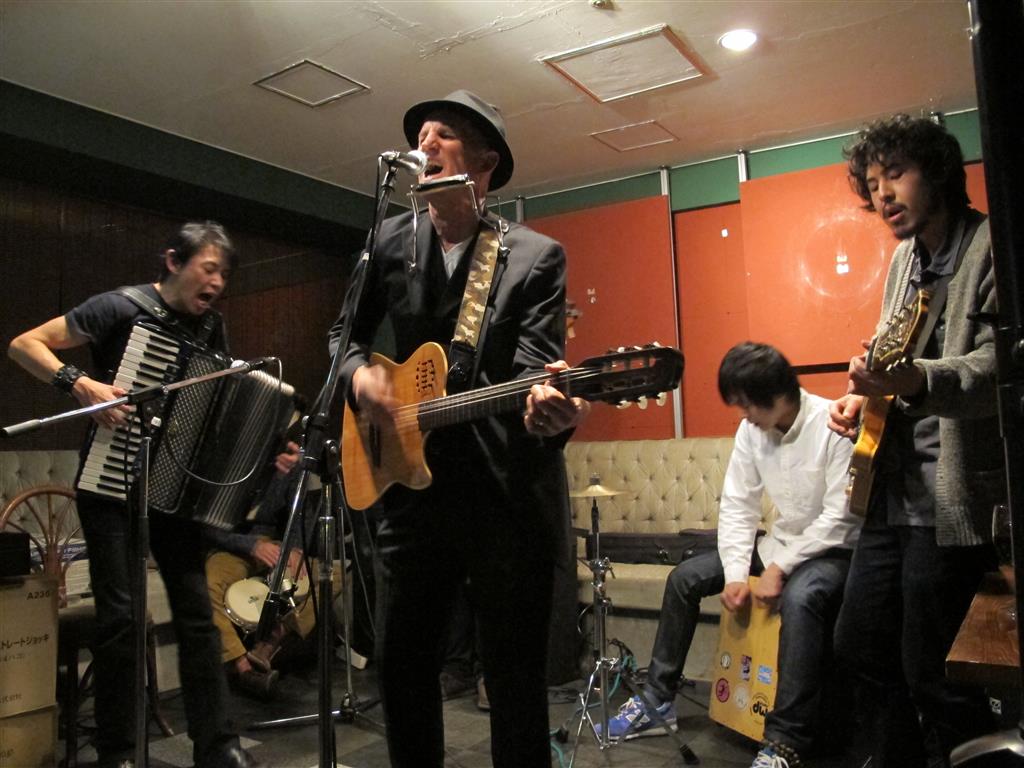 …There are a small group playing Irish music as the rest of our party arrives and Max and I, in honour of our roots, dance a little faux jig as they play. Max manages to persuade the fiddle player Peter Damashek to join himself, Ryotaro and four members of another local band, Dodo, who are due to join them for a full band experience: one fiddle, two guitars, an accordion, bass and two percussionists. This is going to be good.

The magnificent seven raise their glasses in a mutual toast and then play for us a spirited set that is one of the highlights of the night, starting appropriately with a Pogues number before moving onto Max’s originals. Everyone is dancing now, and laughing, the musicians are smiling as they play and Tadg himself happily taking pictures is absolutely beaming. I suddenly feel rather moved at the scene before me, for it doesn’t feel like a show as such but a big family gathering. And then they play Max’s “Glory Be”. I absolutely adore this song: on the surface it is a toast to a loving relationship that has yet outlasted life’s trials and turmoils and with that in mind, I feel a pang for my own girl Miu, remembering that time we swayed to this song together just a year ago.

Tonight though, there’s something else, I feel like the song is also a serenade to this old town and the people in it and that the band is raising a loving cup to us all.

Every soul will be delivered
Somewhere up or down this deep, dark river
Every drop of rain, every grain of sand…

And so another memorable night at Tadg’s draws to a close, and Lawrence and I head over to Urbanguild ahead of the others, as Lawrence says, “to get the pints in”…

In this second extract we have now reached Urbanguild and things are about to get wild!

…It’s well after eleven for we are running late and whatever performances Urbanguild had tonight have now finished, but the audience and performers are unaware that Max and Ryotaro are about to treat them to some indoor busking. Back in Tadg’s, Ryotaro was talking about “having a rest” and playing a few quiet songs outside by the elevator. But they don’t do that. And they don’t set up their gear on the stage either, but in the middle of the floor between the wooden benches. As the onlookers gather round in a smiling but curious half-circle, our rebel rockers commence to play. Lawrence pulls out a harmonica and joins them in his shy way, diffidently floating round the edges. He clearly hasn’t got enough pints in yet. But Max has, or he’s simply high on the music, hunched over his guitar and leaning into the mic, singing “Stone Cold Blind!” with a passion. As for Ryotaro, he is on fire, strutting about, teasing his audience with wild flourishes of the accordion bellows. The musicians are clearly enjoying themselves and their enthusiasm is infectious as the audience responds with appreciative whoops and cheers. This is the second high point of the night. And as they replay Circus of the Sun, the song takes on a new tone, and the blessed freedom they sing of seems both proud and ecstatic…

About Michael Lambe
Michael Lambe is from Middlesbrough in the North East of England. He moved to Japan in 1997 and has lived, worked and studied in Fukushima, Saitama, Tokyo and Kyoto. He has been writing the Deep Kyoto blog since 2007 and doing odd jobs for Kyoto Journal since 2009. He is the Chief Editor of the Deep Kyoto: Walks anthology and has written articles for Japan Today, Morning Calm, and Simple Things magazine.