. Today he has been good enough to write a guest post on the many World Heritage properties of Kyoto, with some excellent personal recommendations. 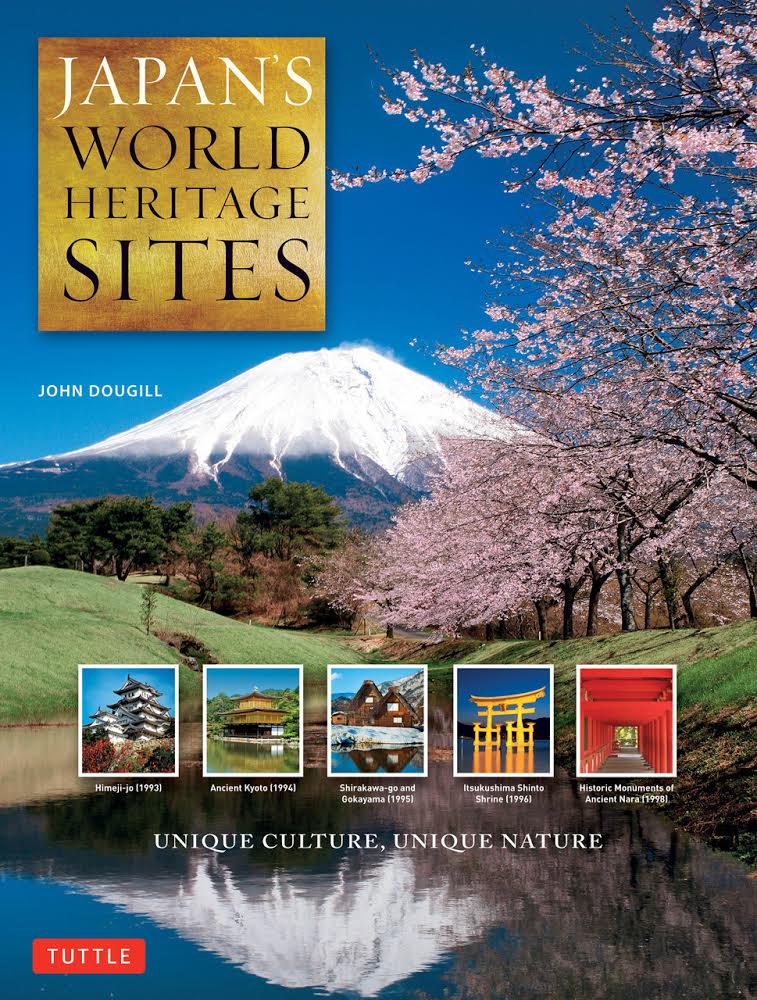 To research my book on Japan’s World Heritage Sites

, I travelled the length of Japan from Hokkaido to Okinawa to visit all the 17 sites. (With the recent addition of Tomioka Silk Mill there are now 18.) It’s a peculiarity of Unesco registration that a single one of Japan’s sites – namely Kyoto – boasts no fewer than 17 ‘properties’, each of which can claim to be a World Heritage site in its own right.

Kyoto was capital of Japan for over 1000 years, and in its river basin was fostered much of the country’s culture: courtly aesthetics, Zen, Noh, the tea ceremony, Kabuki, Ikebana, and geisha arts. Small wonder that the city is recognised worldwide as a glittering gem. ‘Kyoto embodies all the values that Unesco treasures,’ declared Director General, Irina Bokova. ‘It is blessed by glorious nature. It has many intangible assets, like the Gion Festival. And it has wonderful people.’

In 1994 the ‘Historic Monuments of Ancient Kyoto (Kyoto, Uji and Otsu Cities)’ was officially registered as a World Heritage site. The cumbersome title allows for the inclusion of Enryaku-ji on Mt Hiei, which lies within the boundaries of Otsu City, as well as Byodo-in and Ujigami Shrine in the small town of Uji. Altogether there are 13 Buddhist temples, 3 Shinto shrines and 1 castle. Or put another way, there are over 200 buildings and gardens of the highest aesthetic and cultural significance. They include well-known places for which people fly across the world – the Golden and Silver Pavilions, Nijo Castle, Kiyomizu Temple, the Ryoanji rock garden, etc.

Yet there are also obscure properties, unfamiliar even to people who live in Kyoto. Take Ujigami Jinja, for instance, or Kozan-ji. Who would have thought these modest places would outrank such omissions as Daitoku-ji, Fushimi Inari, Katsura Villa or the Gion geisha district? The list of places left out could easily match those that have been included, which begs the question: how exactly did the 17 properties get selected? It’s a question I tried to enquire into, without ever getting a satisfactory answer.

So apart from the obvious, what are my tips for visitors? Two underrated places are Ninna-ji and Daigo-ji, which belong to the Shingon sect of Buddhism. ‘No, not another temple’ is a common complaint of visitors to Kyoto, but sites such as these are much more than places of worship. In fact, you could easily enjoy both of them without even stepping into a temple hall.

Ninna-ji contains the Omuro Palace that exemplifies the aristocratic lifestyle of former times. Covered corridors; fusuma paintings; ancient tea houses; gorgeous garden and exquisite view over pond and pagoda. Nearby is a grove of late flowering cherry blossom, named after the palace.

Daigo-ji too has an attractive villa named Sambon-in, though technically it’s a subtemple. The ruggedness of the garden reflects samurai values and is filled with rocks assembled by Hideyoshi from all over Japan. Nearby, within the precincts proper, is Kyoto’s most ancient pagoda and a picturesque Benten pond to which photographers throng in spring and autumn.

In addition to the man-made beauty both sites provide access to the wildness of the surrounds, where nature is augmented by a spiritual dimension. At Ninna-ji if you exit by the north-west gate, there is a miniature 88-temple pilgrimage which winds around a hill. And at Daigo-ji you can walk uphill for an hour from Lower Daigo to Upper Daigo, where a collection of ancient buildings has connections with Shugendo (mountain asceticism).

Those of us who live in Kyoto know that it would be well-nigh impossible to visit in their entirety all the gardens, temples, shrines, museums, villas, festivals and other items of interest with which the city is blessed. The historical associations and buildings which once housed the great figures of the past mean that Kyoto is far more than merely the proud possessor of 17 Unesco ‘properties’. It’s surely a World Heritage Site in itself!

Text and pictures by John Dougill. John Dougill is professor of British Studies at Kyoto’s Ryukoku University and the author of Kyoto: A Cultural History, In Search of the Hidden Christians, and Japan’s World Heritage Sites. He is also a contributor to our book, Deep Kyoto: Walks.