Cities of Green Leaves 青葉の都市 – Ginko no Kukai
Last Saturday I joined the Hailstone Haiku Circle‘s latest ginko no kukai; an international poetry and nature walk being held across the world in solidarity with the city of Sendai. The event was planned to coincide with Sendai’s Aoba Matsuri or Green Leaf Festival. This festival with its parade and famous sparrow dance is held annually to celebrate the coming of new spring greenery and also in memory of Sendai city’s founder, Date Masamune. Here in Kyoto, we really couldn’t have chosen a better day for a poetry walk. The weather was just perfect!

Meeting close to Kitayama station we strolled for about 15 minutes to our first stop at the kakitsubata iris pond at Ota Shrine. 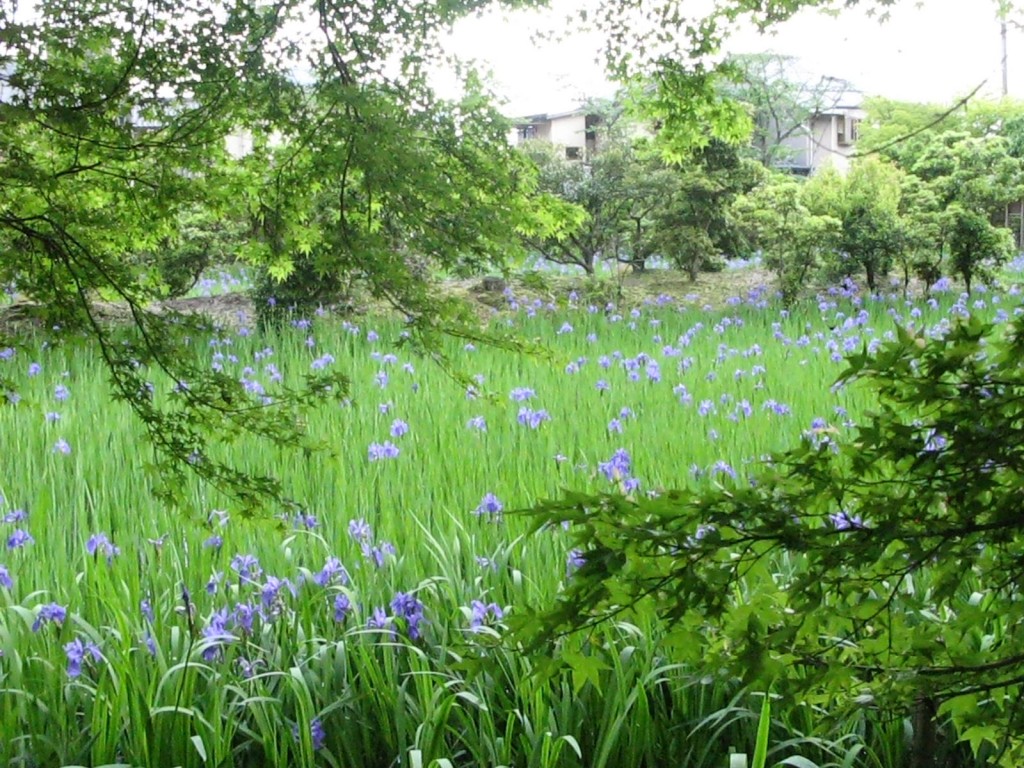 The kakitsubata variety of Japanese iris is known as the rabbit-ear iris in English because of its lop-eared petals. 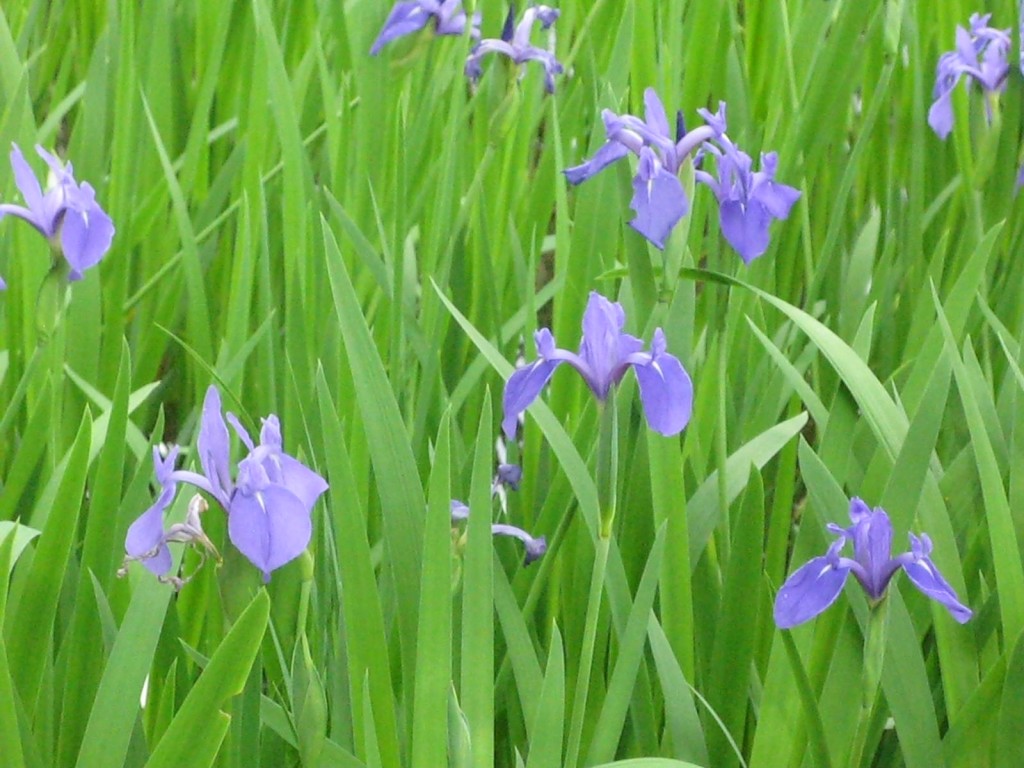 This flower has been well-established in Japanese poetry since Heian times when Ariwara no Narihira is said to have written the following poem from the Tales of Ise using the five initial syllables of the flower’s name: KA-KI-TSU-HA-TA.

Travelling afar
it fills my heart with pain
to recall my Chinese robes
and my beloved wife.

Here the poet was expressing not only regret at being parted from his wife, but also a keen sense of loss at being separated from the Imperial court of Kyoto (as represented by those fine Chinese robes). 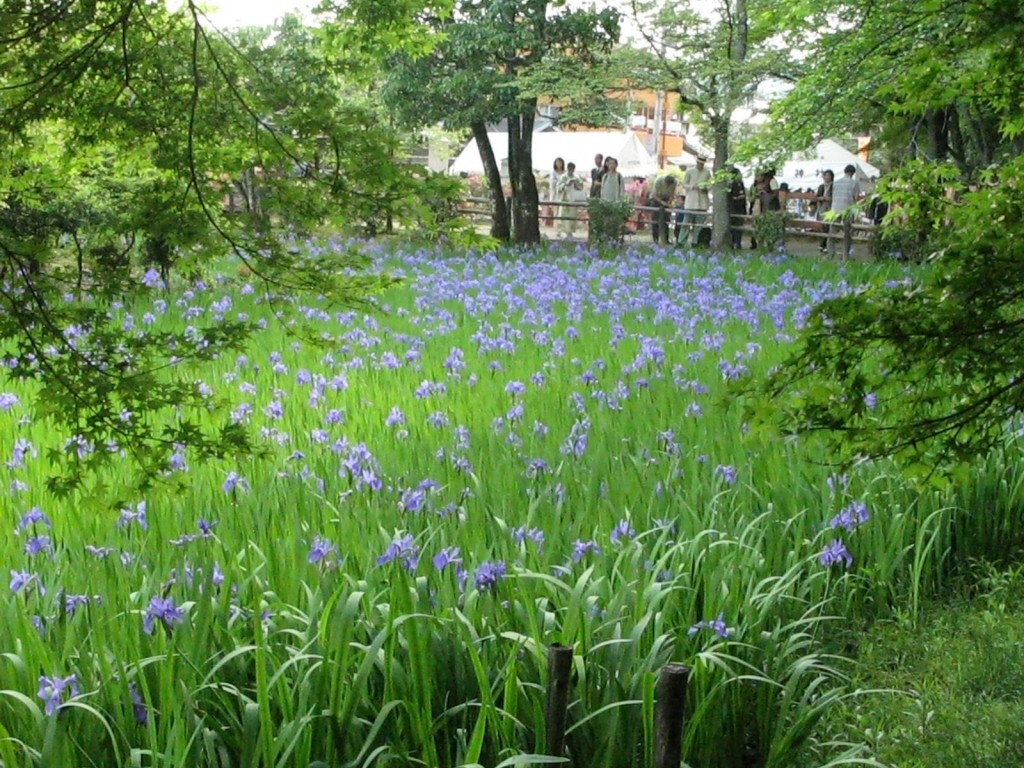 The irises of Ota Shrine specifically were also celebrated in a Heian period poem by Fujiwara Toshinari:

This holy mountain –
the irises of Ota marsh,
in their colour
can be seen
our deep hopes. 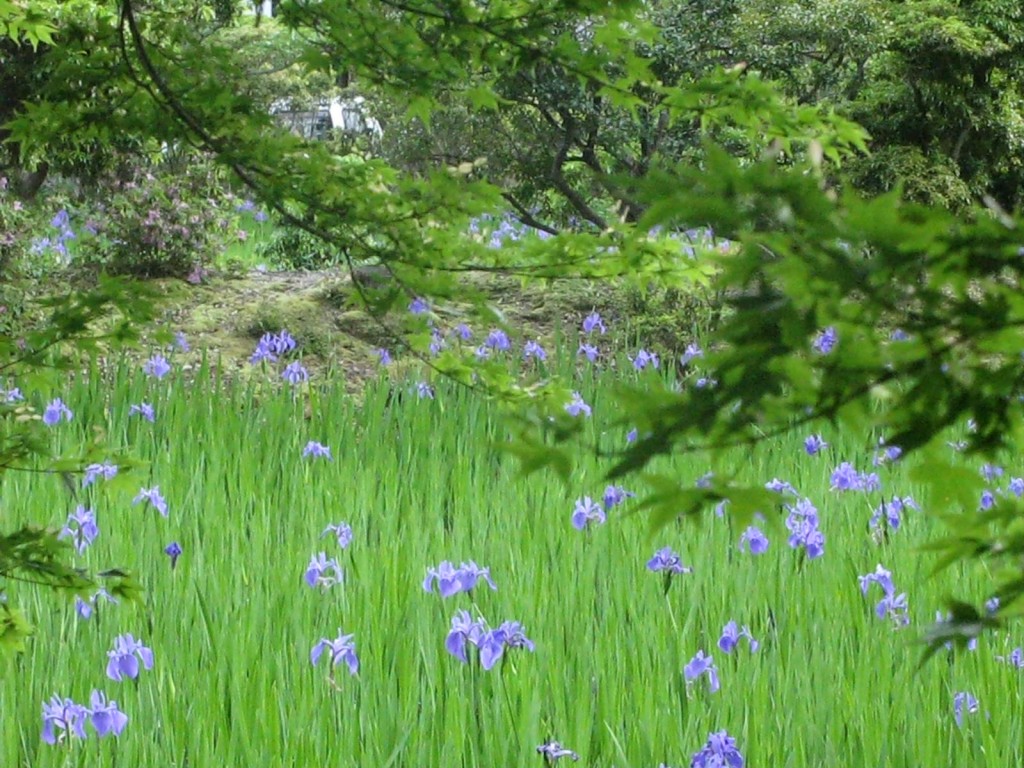 It’s pretty amazing to think that people have been admiring these flowers in this same spot for a millenium. We spent much time here enjoying the special atmosphere, looking at the flowers and scribbling in our notebooks. Here’s one of my admittedly very simple scribbles:

By a little stream people stooped to listen to the tagogaeru, a type of frog that can be heard bouncing love croaks from rock to rock – but rarely seen. We sat here for a while chatting and then reluctantly moved on.

After this we continued walking, talking and writing. We strolled on up to Kamigamo Shrine, and then back on down the Kamogawa, our numbers gradually depleting as the day sank behind us. It was a lovely day, but that iris field was definitely the highlight. Here is my full flickr set of the walk.

My day wasn’t over yet though. I departed from Stephen Gill at Demachiyanagi station and got a taxi to Kiyomizu Temple. There I saw Brian Williams’ splendid show – the first time in 1200 years that anyone has exhibited their art there. I’ll let the pictures speak for themselves, but if you haven’t read it yet, you might also take a look at my interview with Brian previous to the event.