…to feel the presence of this graceful Poet’s Mount, we should go there. If possible, climb up a bit and take in the view. Listen, as the sounds of the city dwindle and those of nature take over. The trail at your feet will soon turn to earth and rock… – Stephen Gill

For the last two weekends I’ve been taking part in conservation work with the environmental action group P.T.O (People Together for Mt. Ogura). I’d heard that P.T.O together with the Hailstone Haiku Circle had brou

ght out a book of poems to raise funds and awareness for their work. Well! Poetry and environmentalism together?! This is precisely the sort of thing I should be supporting, I thought. So I  wrote to the book’s editor, Stephen Gill, and he in turn invited me up to the mountain to help out and to get my hands dirty.

Ogura-yama in rural Sagano has for centuries been closely associated with poets and poetry.  Here Fujiwara Teika compiled the Ogura Hyakunin Isshu; Japan’s most famous anthology of classical poetry and the basis for the New Year’s karuta game. Other poets who have lived and written here are Tōru, Saigyō, Tame’ie, Bashō, Kyorai – some of the most famous names in Japanese literary history! This mountain, that has inspired so many, should certainly be considered a national treasure. I was very excited to be going up there.

I met Stephen Gill and the other volunteers at JR Saga/Arashiyama station. Stephen is himself a poet and an artist and a charming gentleman who speaks fluent Japanese. From the station he pointed out to me Ogura-yama’s beautiful dome and told me about its problems. It seems the Poets’ Mountain is neglected at best and at worst abused. Once people  would have used this mountain as a natural satoyama-style resource for firewood and food, but now locals rarely venture up it’s wooded slopes.  The old trails are unsigned and having fallen into disrepair are unsafe for the public. Left undisturbed, wildlife has thrived here; there are deer, boar, hares, tanuki, martens, badgers, macaques and an abundance of birdlife. However, environmental problems are also rife. In the 1980s, in order to bore a railway tunnel through the mountain, a great shaft was dug out through the summit, irrevocably changing the shape of the mountain, and altering its water courses. And after the construction was done, the forest at the top of the mountain was left completely devastated. Belatedly, a reafforestation program was begun, but in recent years these new pines have been killed by an insect borne disease that has ravaged pine forests across the country… The biggest and most shameful problem though, is that of trash. For decades people have been illegally dumping their junk on the Poets’ Mountain. Now in Ogura’s oakwoods you will find refrigerators, futons, tires, construction site waste, agricultural equipment, glass, cans of paint… And rainwater carries this non-biodegradable waste’s pollutants down to the Hozu River below. It’s all very sad, but P.T.O. are doing their very best to combat these problems.

They have a lot of work to do; felling dead trees to prevent the disease spreading, clearing the junk and (on the first weekend that I joined in) repairing the fences about the bamboo groves. 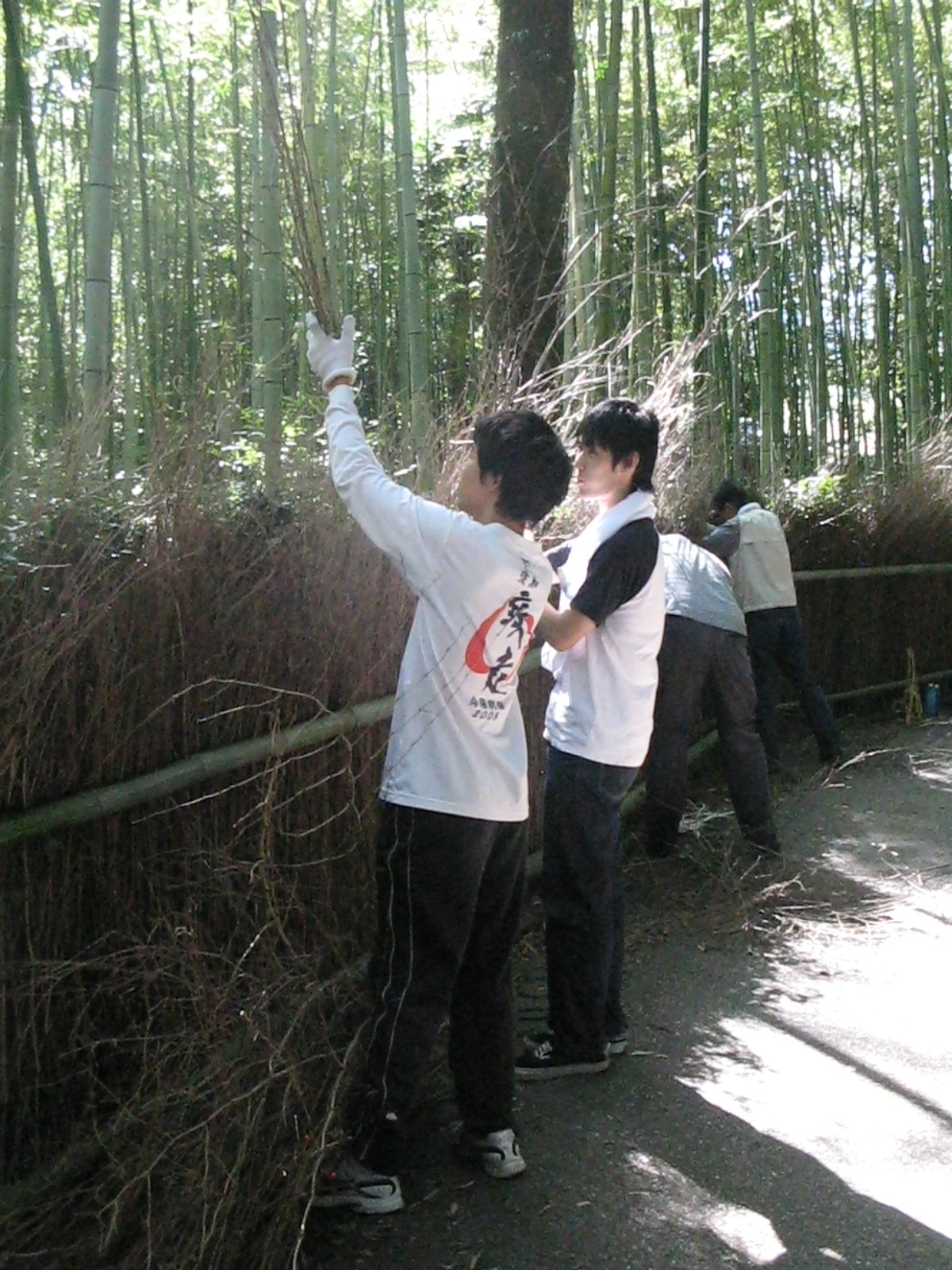 The bamboo groves around Ogura-yama’s base are self-rejuvenating but if they aren’t sufficiently protected with fences then come spring time wild boar will get in and eat all the new shoots. The guys in the picture above and the two girls talking to Stephen in the next picture are all students from Ritsumeikan University. They get course credits for helping out, as well they should. This kind of work is very educational. 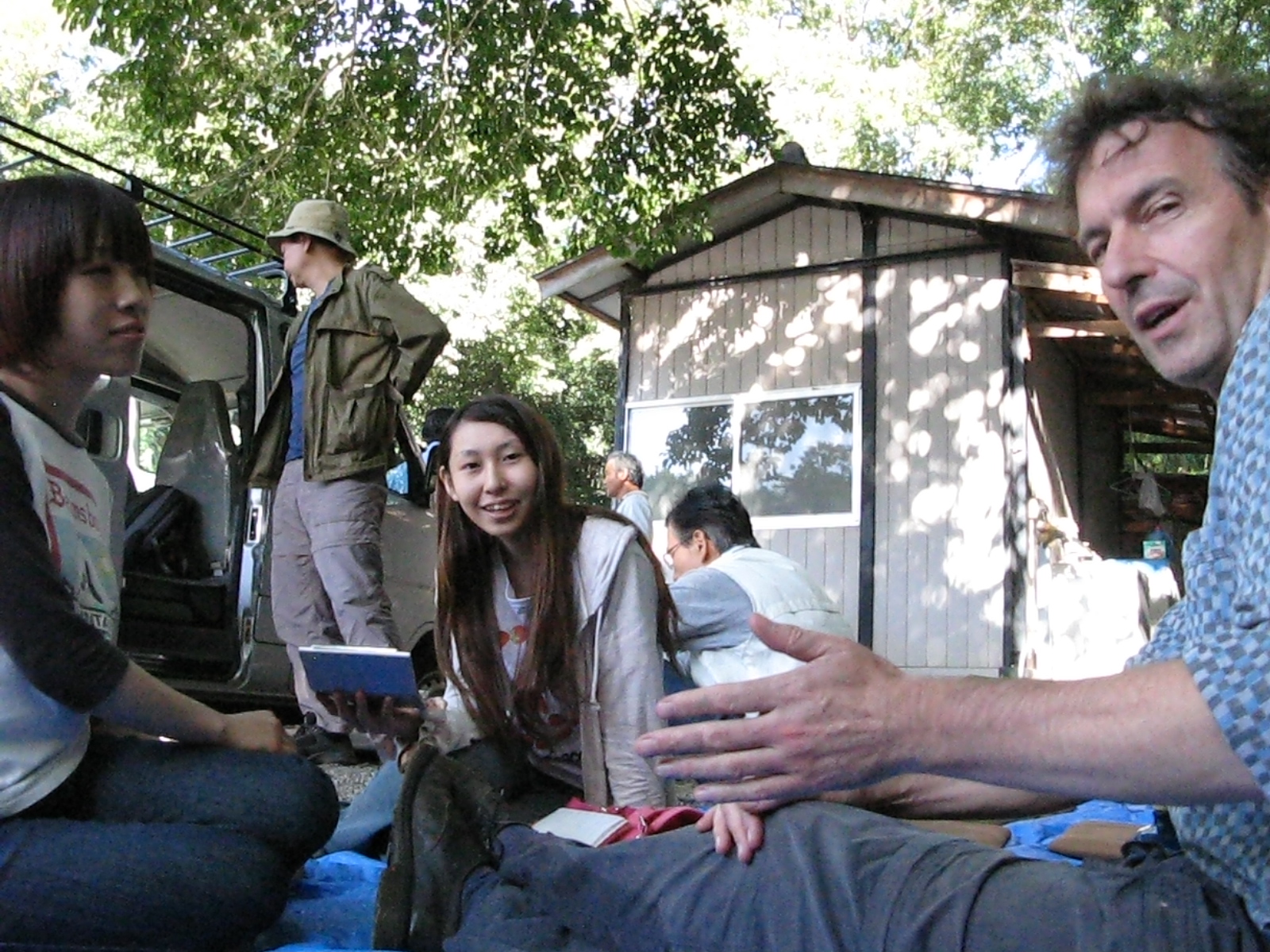 That first day was a beautiful crisp September day and it was so nice to be outdoors, breathing fresh air and doing something useful. I really enjoyed it and couldn’t wait to go back again. On the second occasion I roped in my friend Massun to come along too. This is him on his way up to the summit. Still smiling. He doesn’t know what he is in for! 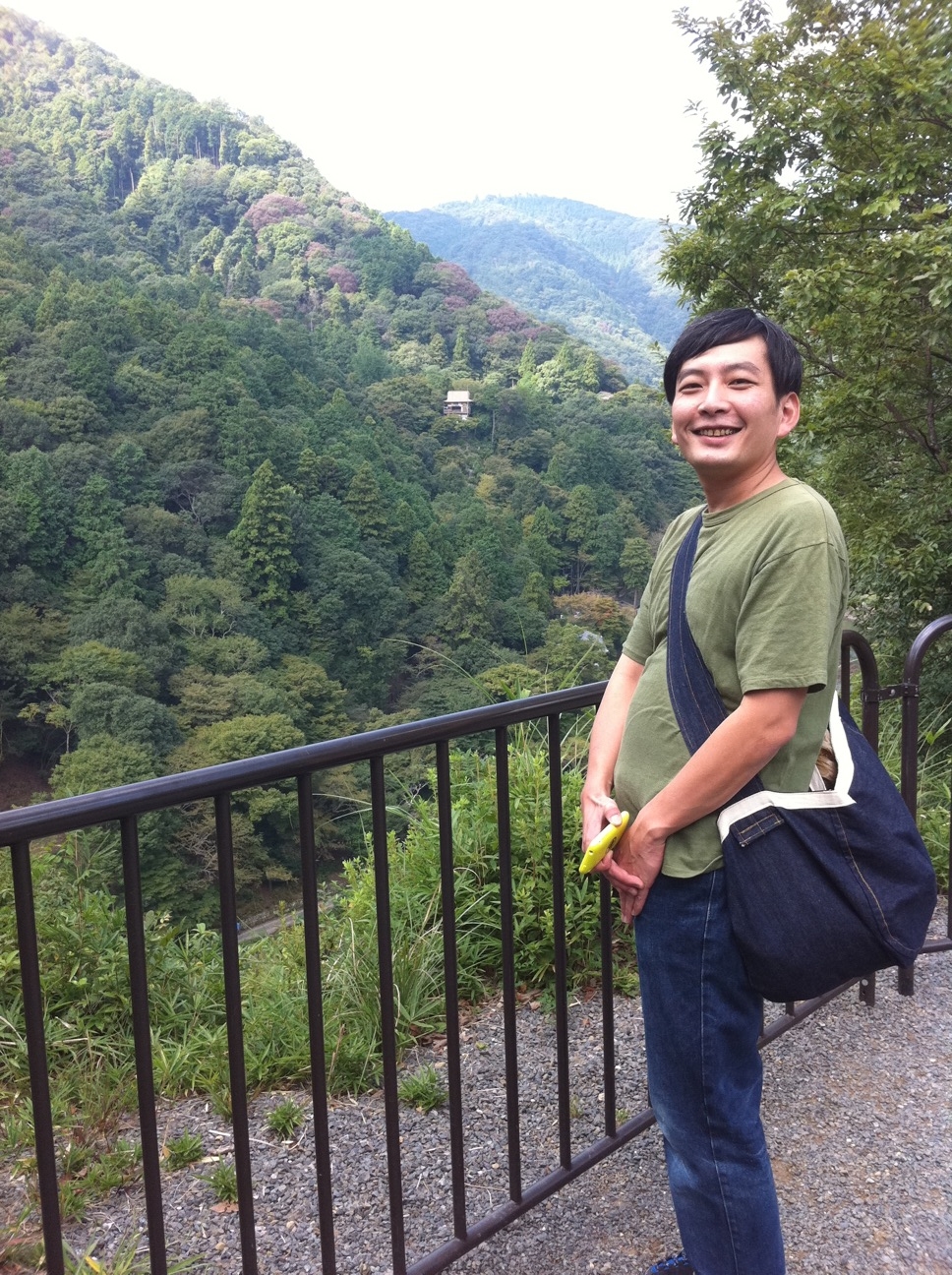 As we climbed Stephen would stop every now and then to point out various plants and fungi and prehistoric ritual stones. You really couldn’t have a better guide or teacher. And some of the views along the route were spectacular. 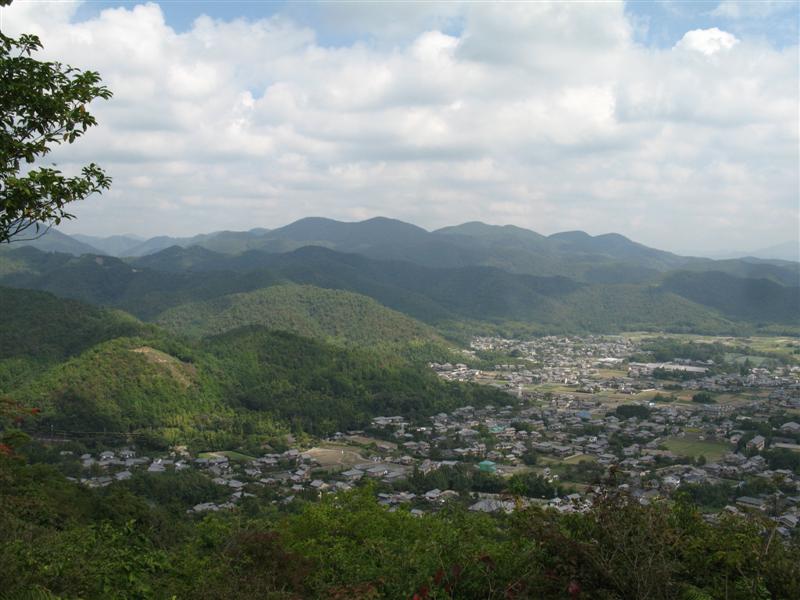 The work though was tough. At the top of the mountain Pine Wilt is taking a heavy toll on the trees. Those that have died have to be cut down, taken from the mountain and burned in order to prevent the disease spreading further. Massun and I spent the day climbing a slope, cutting down trees, chopping them up, carrying them down and then climbing back up to start it all again. It was a real full body work-out and by the end of the day we were exhausted! I cannot tell you how much I enjoyed the tea Stephen served us at his house later. I was parched and had five cups! 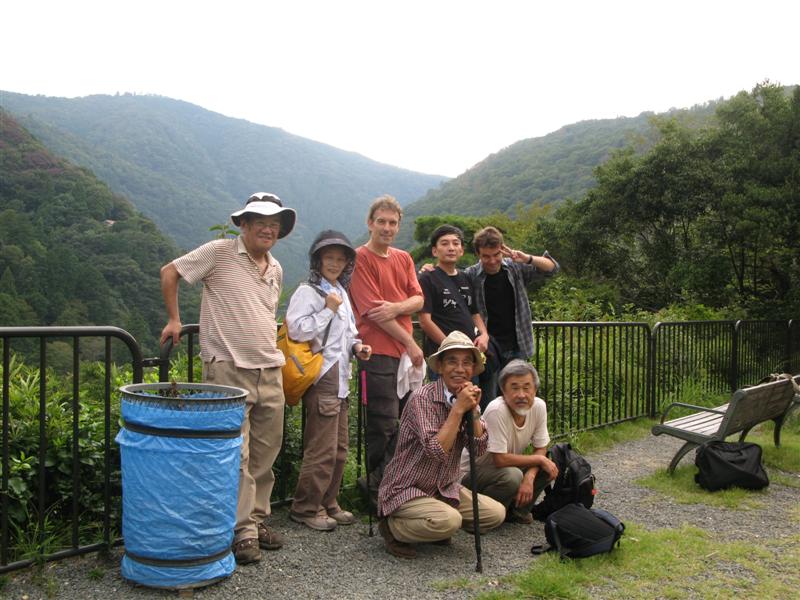 So there you have it, helping it out with P.T.O. is good for the mountain, good exercise for your body, and good for your soul! They are doing fine work up there and are gradually solving the trash problem. Most importantly they have recently won some security cameras from the city government that have largely stopped the fly tipping. There’s still a lot to be done though and as you can see from the picture above, a lot of their members are in their 50’s, 60’s and even older. They need fresh blood! How about coming along one day and lending a hand? You won’t regret it. With P.T.O as your guide you’ll learn a lot about a part of Kyoto that most people never get to see. And just being out in nature – it gives you energy you know. If you are interested in taking part contact Stephen Gill at heelstone@gmail.com and he will send you a schedule. I recommend it. It’s hard work as I said, but it makes you happy.

The kiri-e or cut paper illustrations in this post are by Yoshio Kawagoe (far left in the picture above) and are from the book: One Hundred Poets on Mount Ogura, One Poem Each which I will review in a further post.