Here is the fifth in a continuing series of profiles of Kyoto-based photographers. Each photographer chooses five of their favorite pictures from around Kyoto and tells us a little about what those pictures mean to them. This time I asked local photo-blogger Jeffrey Friedl to contribute – and I am so glad that I did! Jeffrey’s pictures are breathtakingly beautiful! Jeffrey says…

Holy cow, it’s not easy too whittle an archive of 90,000 photos down to five! It would have been *so* much easier to come up with my top 500 best Kyoto photos… even 50 would have been difficult… five is just impossible. So, I thought about how to pick, and decided to abandon the idea of picking “good” photos (photos that could stand alone on their own photographic merits), and instead pick photos that illustrated a feeling or place I wanted to share. Even then I had hundreds… Some of my favorite or most popular photos I’ve ever taken didn’t make the cut. Making the selections was a brutal process. 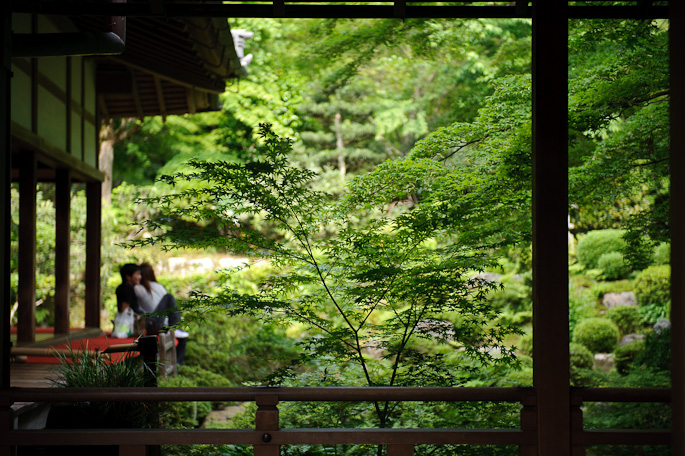 The garden at Sanzen-in Temple. Kyoto’s tourist spots are heavy with shrines and temples, and most people either rush through them trying to fit in as many as possible into their day, or, like me, spend all the time behind a camera. This photo (which comes alive when viewing the larger version that fills the screen) reminds me that these gardens were meant to be experienced at a slower, personal, relaxed pace. 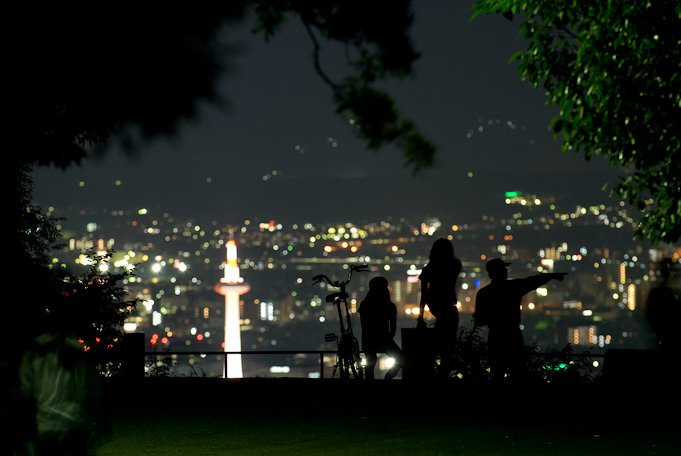 Young and old enjoy a relaxed evening at the Shogunzuka overlook in the small mountain to the east of the city. The Shogunzuka overlook is a great place to catch the sunset, or just an expansive view of the city. The view can be particularly amazing with the crystal-clear air that comes the day after a typhoon blows through. Hiking up from the Kiyomizu Temple or the Westin Miyako Hotel takes less than half an hour, though it’s much easier and faster by car. 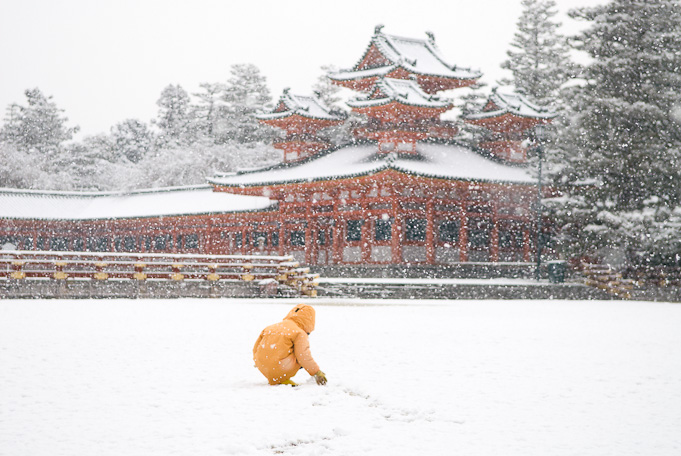 Kyoto city proper doesn’t get much snow, and what it does get normally melts off quickly, so if you’re around when it’s snowing in the morning, it behooves you to get out early. Two winters ago we had the most snow since the 50s, and one morning I went out with my boy for a walk that ended up at the Heian Shrine even before the gardens had opened. The entire shrine area was layered with undisturbed snow: absolutely beautiful to an adult, and absolutely irresistible to a kid. The garden area, when it opens, is fairly pricey as shrines go (600 yen), but if you’re one of the first there after one of Kyoto’s rare
snowfalls, the experience is priceless. 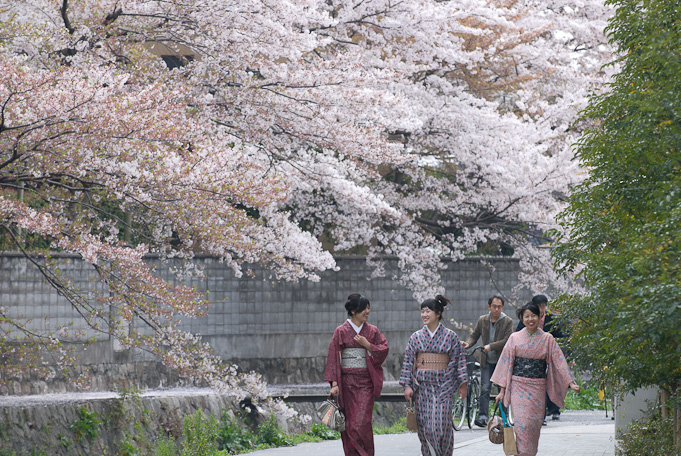 This is an excellent example of a bad photo…. washed out, poor framing, cluttered background…. but the smiles on the ladies epitomize the best aspects of the cherry-blossom season. In some places, such as Maruyama Park, hanami seems to be nothing more than an ugly, loud, smelly crush of that brings out the worst in people, but smattered around the city are cherry-blossom areas that somehow garner a festive, joyful atmosphere that maintains despite the huge throngs of people creating it.

This photo was taken along the Shirakawa River in Okazaki, just south of the National Museum of Modern Art, not too far from the zoo. One of my Cherry-Blossom Joie de Vivre posts (here) does a fuller job of conveying the atmosphere, with its last photo being one of my all time favorites. 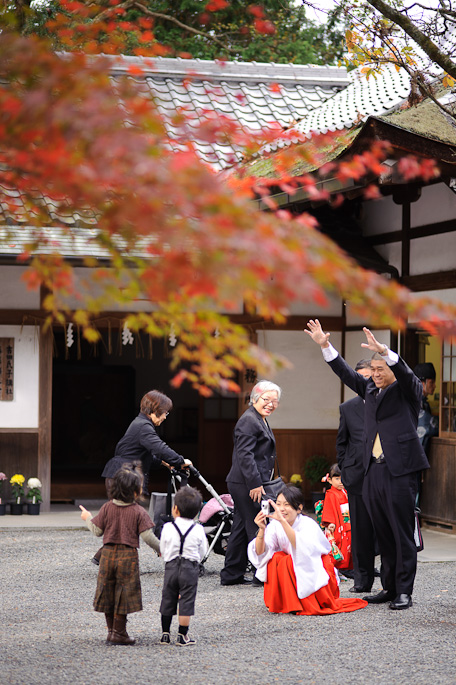 November brings “shichi-go-san” celebrations (honoring kids who are 3, 5, and 7 years old, when counting birth as being at 1 year old) to shrines across Japan, and Kyoto certainly has more than its fair share of shrines. The kids in the photo above are too small to be dressed up, but on weekend days in  November, you can make a day of it at a Kyoto shrine just enjoying the kid coming and going. Many are dressed up in their finest formal wear (both Japanese and Western), as illustrated in my Kids in Kimono: Cute Enough to Eat blog post. I happened to be spending a lazy Sunday morning at the Yoshida Shrine near Kyoto University when this family came in. This photo has many nice elements — the shrine worker taking the shot, the tiled roof, the smiling grandma, the colorful leaves — but it’s the dad who makes the photo. I would be reticent in my duty as a dad not to impose my own kid’s photos on you. Here’s my boy’s shichi-go-san portrait and, in case you’re interested, a post about the preparations that go into the day.

I’ve got lots of “pretty” photos on my blog (some of the more interesting ones are in my combined photostream), but in looking over these five photos that somehow selected themselves, I realize that they all have people in them, and that it’s the people, in my eyes, that make each photo.

Jeffrey Friedl is an American software engineer who has lived in Japan on and off since 1989, and in Kyoto since 2004. He picked up photography as a hobby in 2006, and now tends to use a lot of photos to illustrate posts on his personal blog.