A very big congratulations to director John Gorman and the very brave students of Ryukoku University for their sterling production of the comedy musical Avenue Q. Praise should also go to Mika Matsumoto McLoughlin for her musical direction. I was pleasantly surprised at how good the show was and impressed by the students gutsy attitude in putting on a big song and dance performance entirely in English! Whoever designed and built the set deserves several pats on the back too. Of all the student performers though, Moe Wada, as Kate Monster, stood out for her very fine singing voice. Her performance of There’s A Fine Fine Line was amazing. However, when you consider that this was an amateur student production and that none of the performers were acting in their native tongue, I think everyone involved should be very, very proud of their achievement. 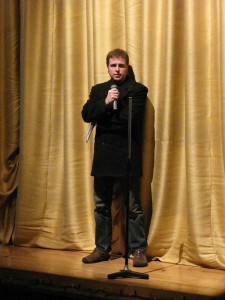 What’s more, the big news from Rob Mangold is that the performances raised a grand total of 120,395 yen to help IDRO Japan continue its fine work helping tsunami victims in Tohoku. Before the show Rob gave a brief talk detailing IDRO’s achievements thus far and its ongoing work helping people in northern Japan rebuild their lives. Here’s a summary of IDRO’s work so far from their website:

IDRO Japan has sponsored over 8 relief trips from Kyoto. During these trips IDRO Japan:

In addition to the water heater project and “tools for Tohoku” project, recently, IDRO has also helped renovate a unique Minka building in the town of Ohara that is over a hundred years old, to be used as a restaurant and hopefully help revitalize the local community. They have also given financial support to Elf Tree providing contamination (and fear) free vegetables from Kyushu for expectant mothers and babies in Fukushima. This is the kind of work that the money raised by this weekend’s production is going to support. If you would like to add your own support to this ongoing work then please visit the IDRO Japan website or contact them directly here: idrojapan@gmail.com