Today I am posting another in a series of short excerpts from our ebook Deep Kyoto: Walks. In Blue Sky, the poet Stephen Henry Gill acts as a guide to the Saga & Arashiyama area for a young visitor who has come to learn more about the conservation NPO, People Together for Mt. Ogura. Stephen whimsically names his visitor Blue Sky, because that was the first thing he saw that fine autumn day. We join them mid-way through the tour…

On our left is a tilled field, in which the raggedy, nondescript greens are straggling. Going down this near side of the field, we soon come to the rustic gate of Rakushisha, the ‘House of Fallen Persimmons’, the thatched cottage once owned by Mukai Kyorai (1651-1704), and where his haiku master, Matsuo Bashō (1644-94), once stayed. Here, Bashō wrote his Saga Nikki, the ‘Saga Diary’. Another story for Blue:

One day in autumn, a merchant from Osaka passed the house, which was then located in an orchard of persimmon trees. He went in and negotiated with Kyorai to purchase the entire crop, paying him an advance and telling him he would come back the following day to harvest the glowing orange-coloured fruit. Kyorai went to bed feeling pleased with himself, but awoke in the night as a storm set in and proceeded to shake all the fruit down onto the ground. The crop was ruined and, the next day, when the merchant finally appeared, Kyorai had to hand back the deposit he’d received. From that day on, he would refer to himself ironically as ‘The Master of Persimmons’.

There is no time today to take Blue Sky in for a peek around the cottage and its garden, though it is worthwhile, so we retrace our steps along the right side of the field and look back at the house from the far side before making off, southwards again, down a winding lane between hedges. The peak of Arashiyama (‘Storm Mountain’) begins to loom up ahead. As the lane bends sharply right hugging the tall hedged boundary round another traditional thatched house, we come to a small, flowery meadow partly screened behind tall posts strung with netting. I challenge Blue to come up with a reason for the erection of the fence. With hardly a moment’s thought, she offers, “Deer?” She is a country girl at heart. The same problem, apparently, in her part of Nagasaki: marauding deer eat flowers in gardens, crops in fields.

A few late white lilies still bloom in the meadow, which we keep on our left, climbing steps up to Ogura Pond, the occasional home of kingfishers and egrets, but with a rather-too-green, under-oxygenated complexion. We walk left along its bank to Torokko (Truck Railway) Arashiyama Station, outside which wait the rickshaw-men, and inside which are sold green-tea soft ice-cream cones. These are usually accented with a crunchy cinnamon yatsuhashi biscuit: a favourite with younger volunteer members of our NPO.

We climb the cobble-fringed slope up over the railway line and into Kyoto’s most beautiful bamboo forest, meeting a wave of tourists as we go. On our right-hand side is the entrance to Ōkōchi Sansō, a fine Kyoto-style garden, where you get served tea as part of the admission charge. Blue Sky asks me about the brushwood fences that line the path. I tell her to come again one day and help PTO repair them, 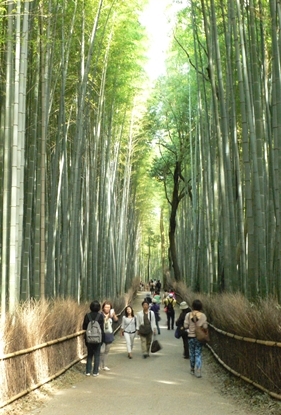 essential work in order to keep at bay the wild boar, which would otherwise snuffle up and eat the tender shoots, preventing proper regeneration of the groves. We gaze down the narrow road to our left, with its tall, arching bamboos filtering the sunlight and swaying slightly on either side.

Have we too become
Mere crickets
In this cathedral of giant grass?
A chorus of Chinese. 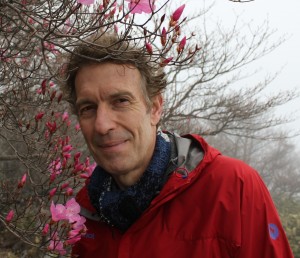