Last Saturday I joined Stephen Gill and Okiharu Maeda of the conservation group P.T.O. for a hike along the Hozu River. The hike wasn’t purely for the pleasure of getting out into the fresh country air though, Maeda-san and Mr. Gill were making a detailed report, with photographs of the exact location of trees on Mount Ogura that have been affected by a deadly oak disease. Even from a distance now you can see some patches of brown on the mountain (left click on these pictures twice to see them at their maximum size). 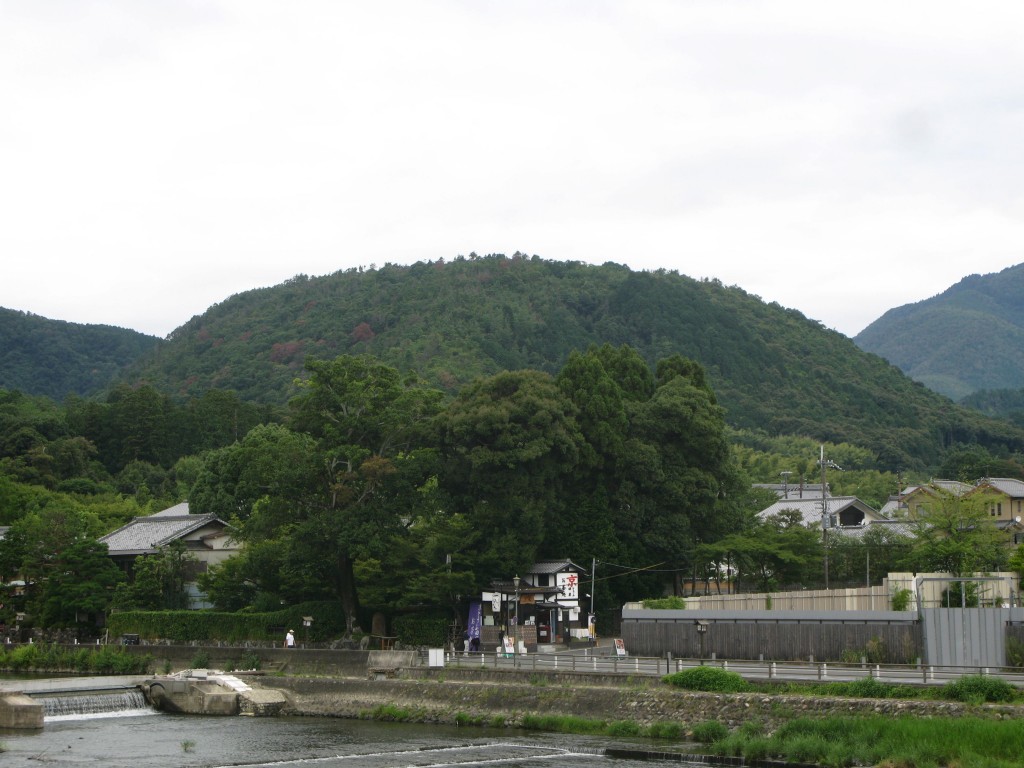 These trees are not exhibiting early autumn foliage – they are dead, and the process is quick. Stephen told me that most of these trees looked fine three weeks ago. As we moved closer to the mountain along the river, the full extent of the problem became clearer. 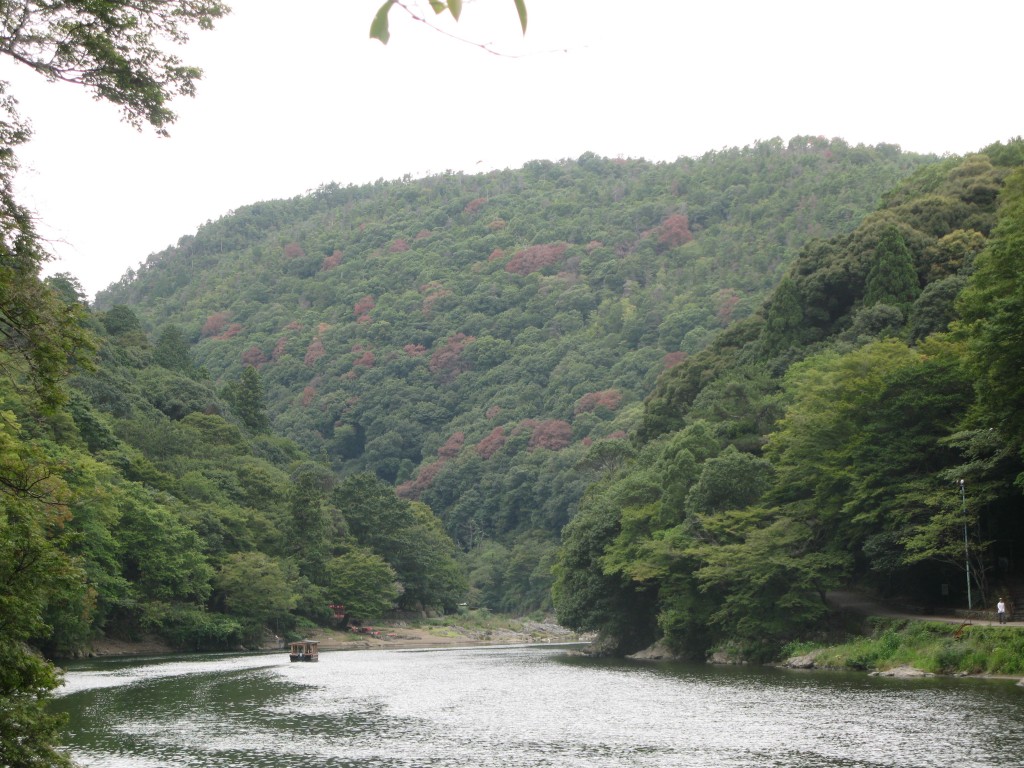 I think during our hike Maeda-san must have counted over 100 dead trees on the mountain. P.T.O. will submit their report to the city office and ask them to act upon it. There are methods to tackle this disease but as you can see from the damage that has already been wrought, these methods need to be implemented fast before this beautiful mountain view is ruined. 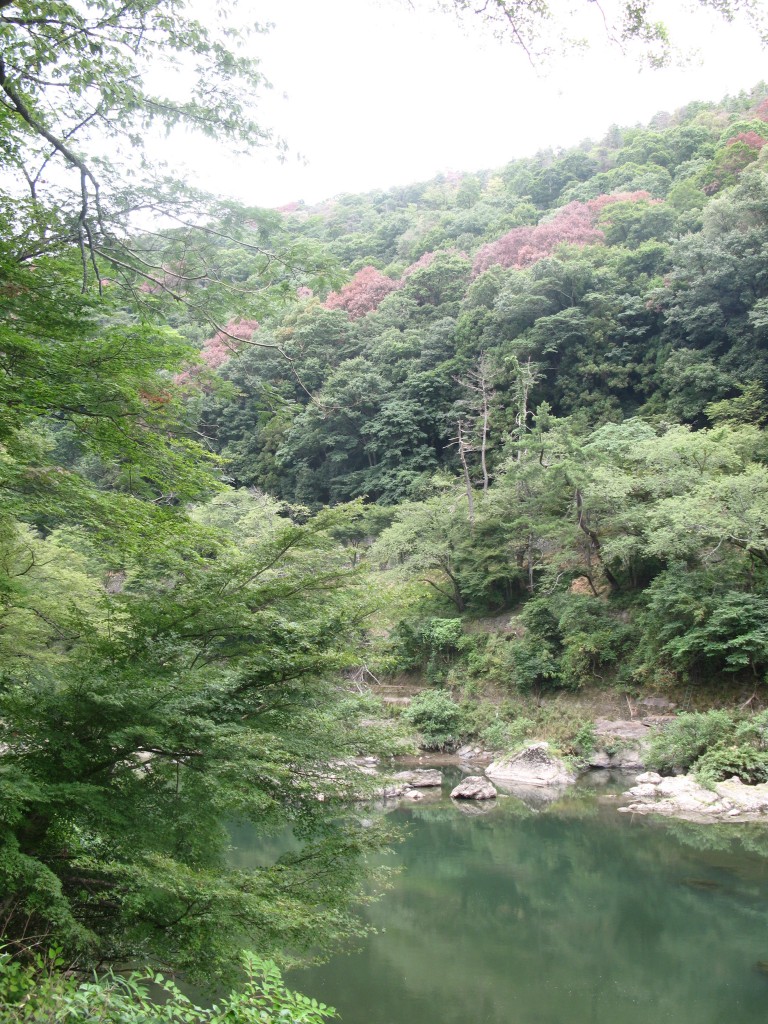 Our route took us along parallel to the old Funahiki trail that horses once walked when pulling boats back up to Kameoka. That path hasn’t been maintained at all and in places barely exists anymore so the going was a little hairy at times. Our first barrier however was this: 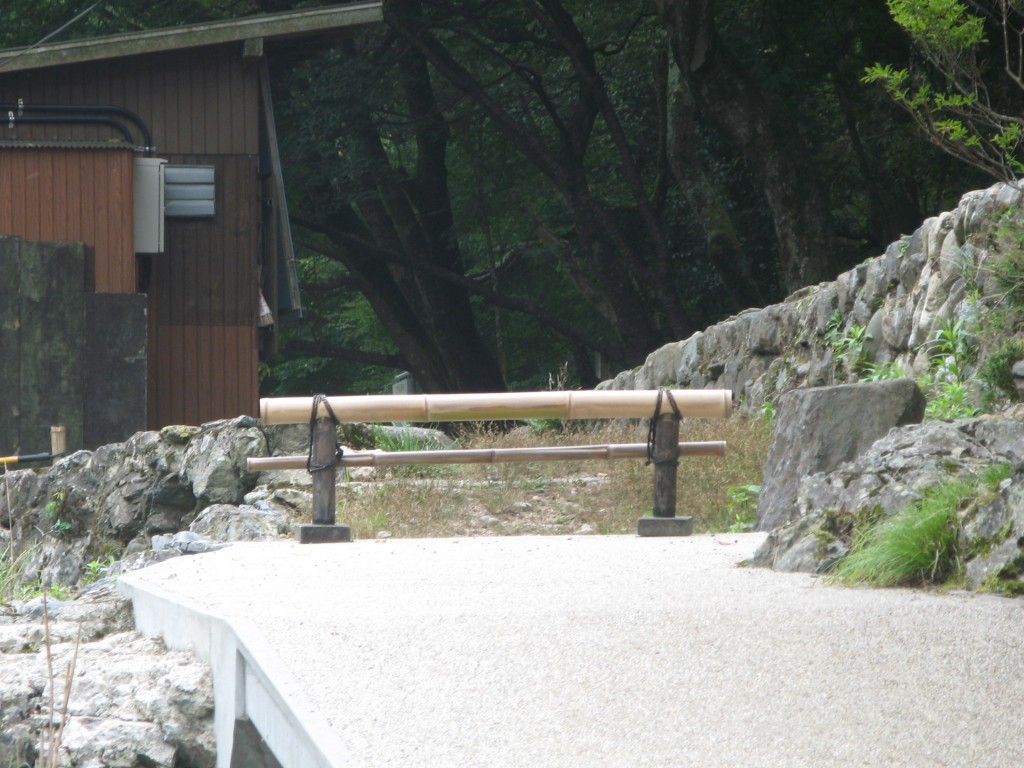 This barrier has rather cheekily been placed here by Hotel Hoshinoya, who presumably having already built their own little pier onto the river (quite illegally apparently) now seek to keep the riff-raff out by marking off their territory. Only problem is that they are marking off a public walkway. I think most people would see the barrier, think “private property”, and turn back. The way ahead is actually entirely open to the public. The state of the path itself however, consisting of a thin strip of crumbling rocks for much of the way might be off-putting for most… 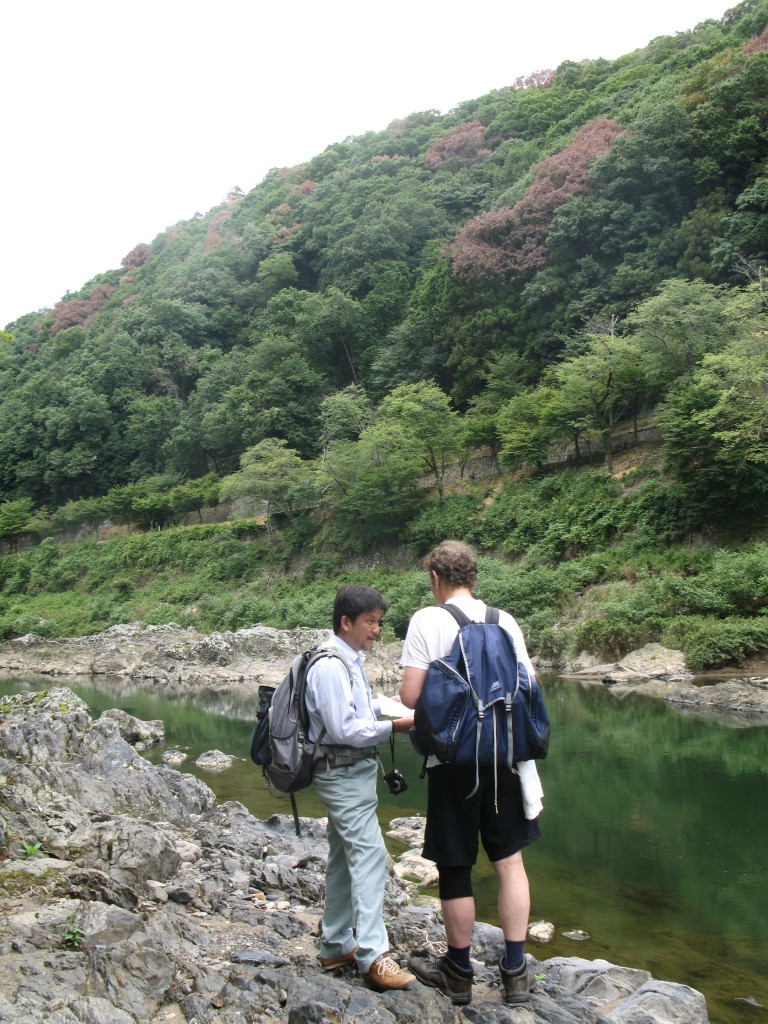 Not for us though – we were on a mission. 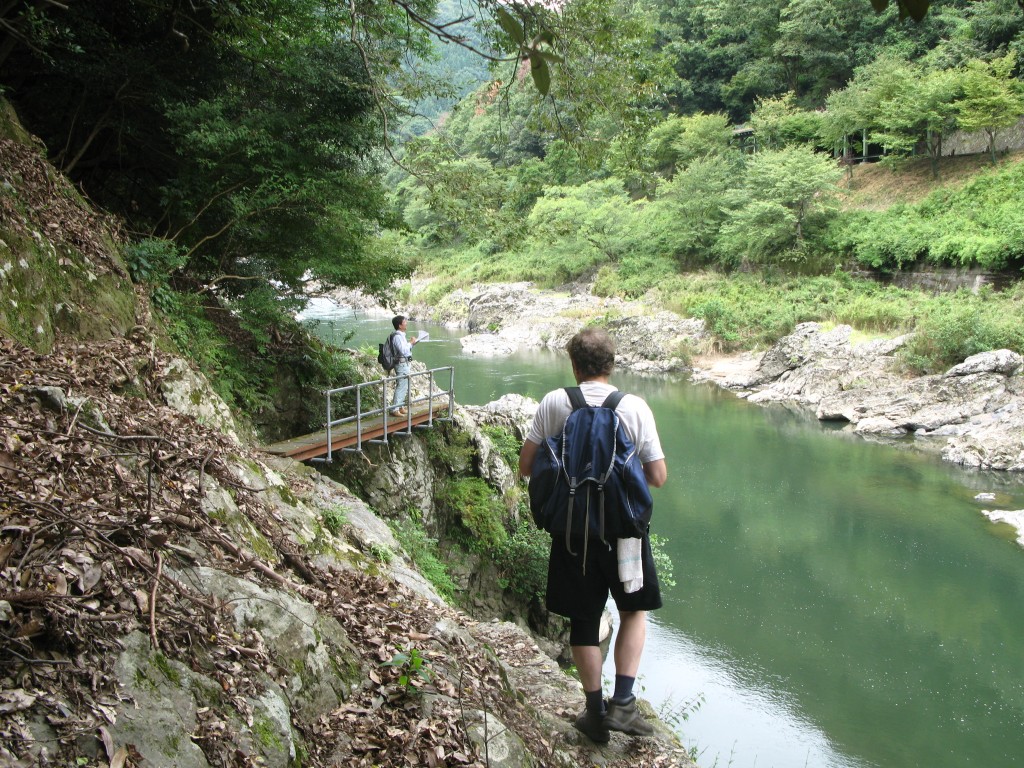 Despite the sad state of many of the trees, it’s impossible not to enjoy a hike into the Japanese countryside. 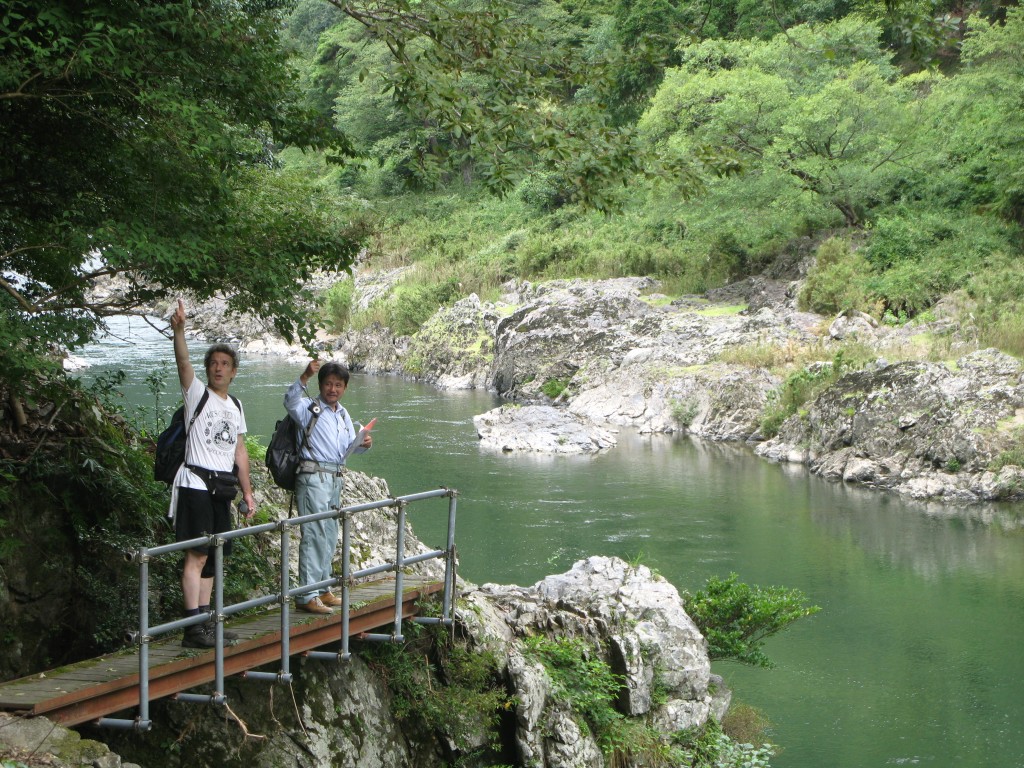 Some of the views were simply gorgeous. 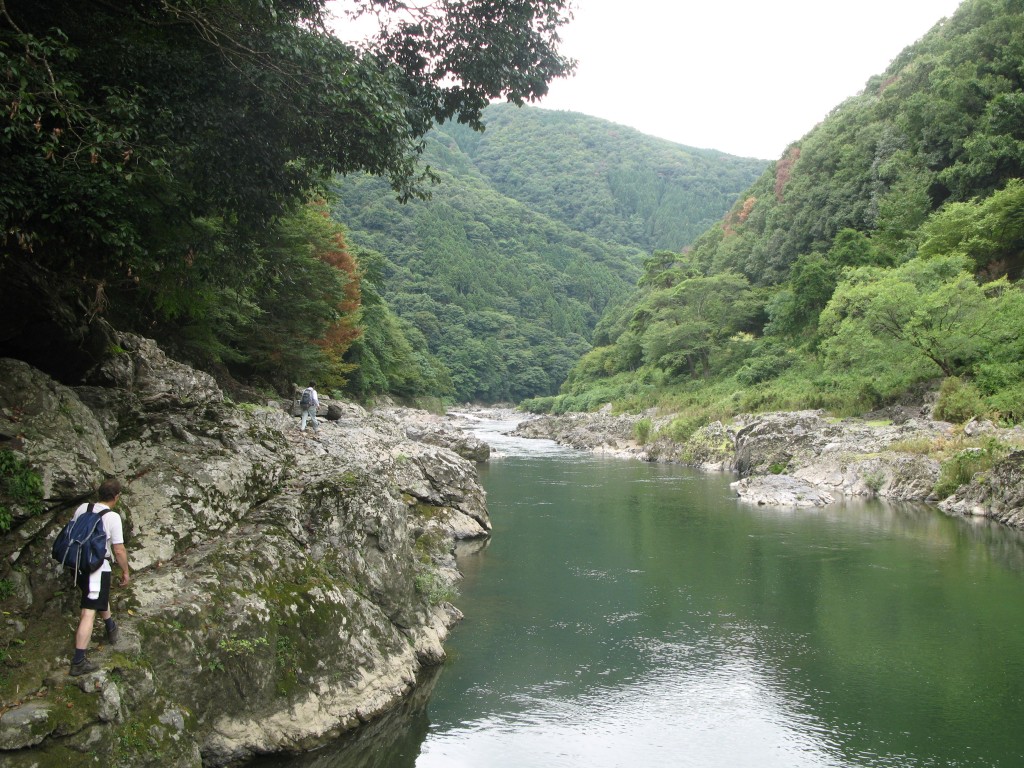 At the river rapids: 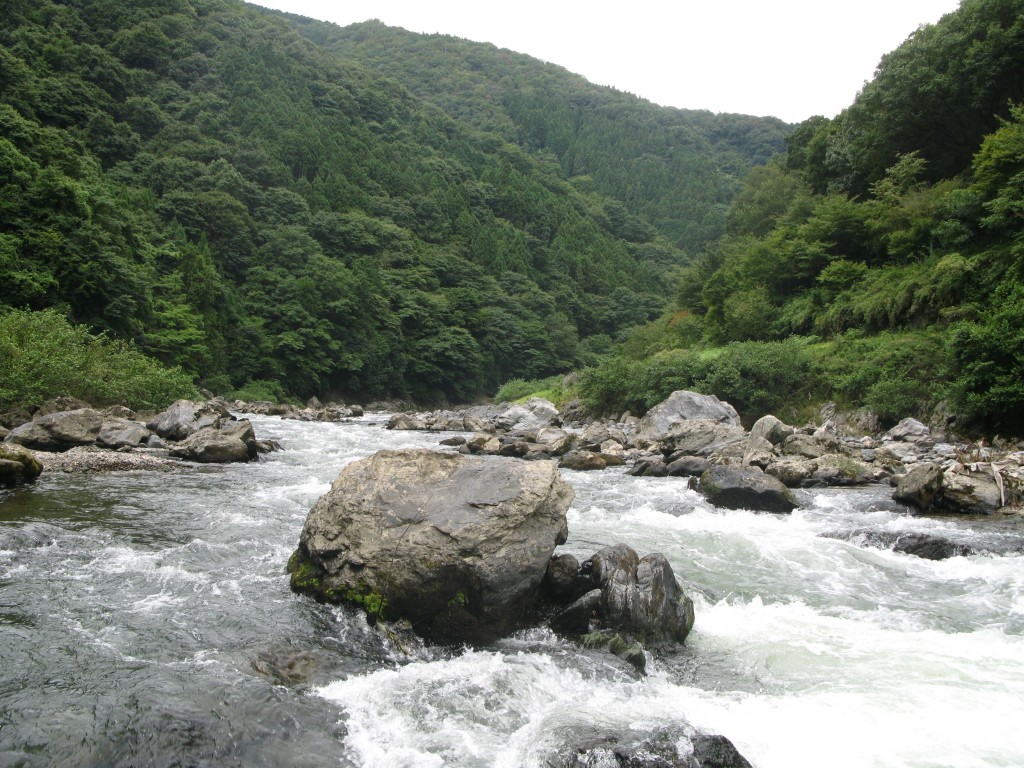 Some people like to swim in the Hozugawa, but Stephen doesn’t recommend it. Even in areas where the water seems calm, there can be strong undercurrents that pull you under and jagged rocks beneath that can trap you. Every so often somebody swimming here drowns… 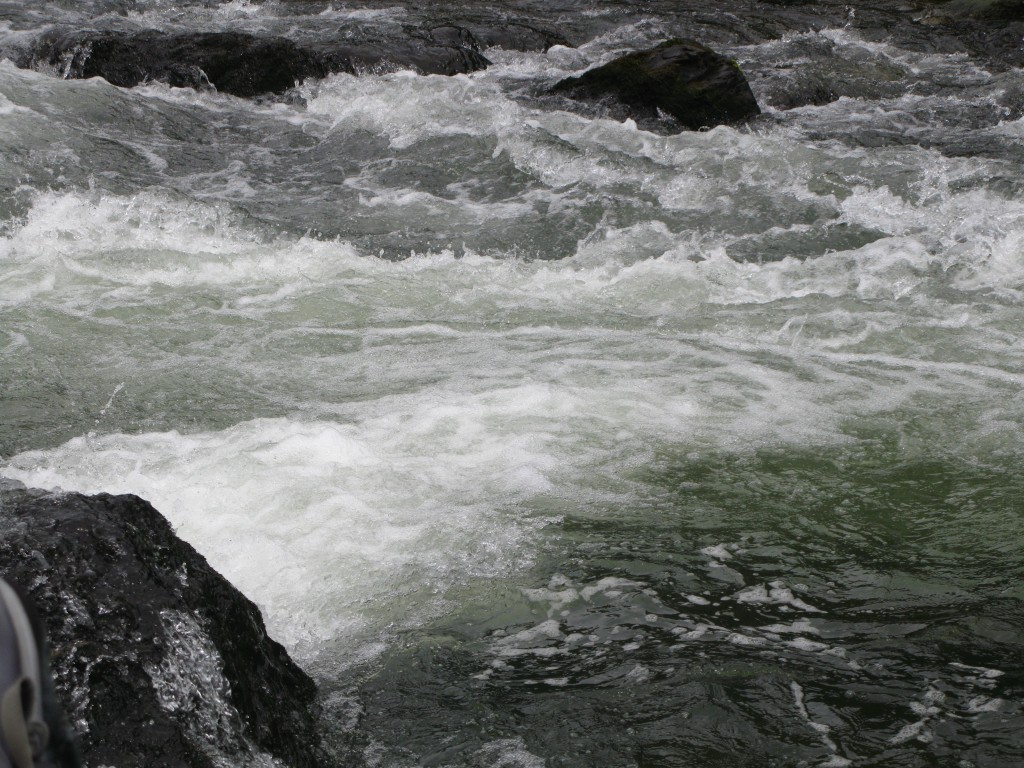 Another lovely view back down the way we had come: 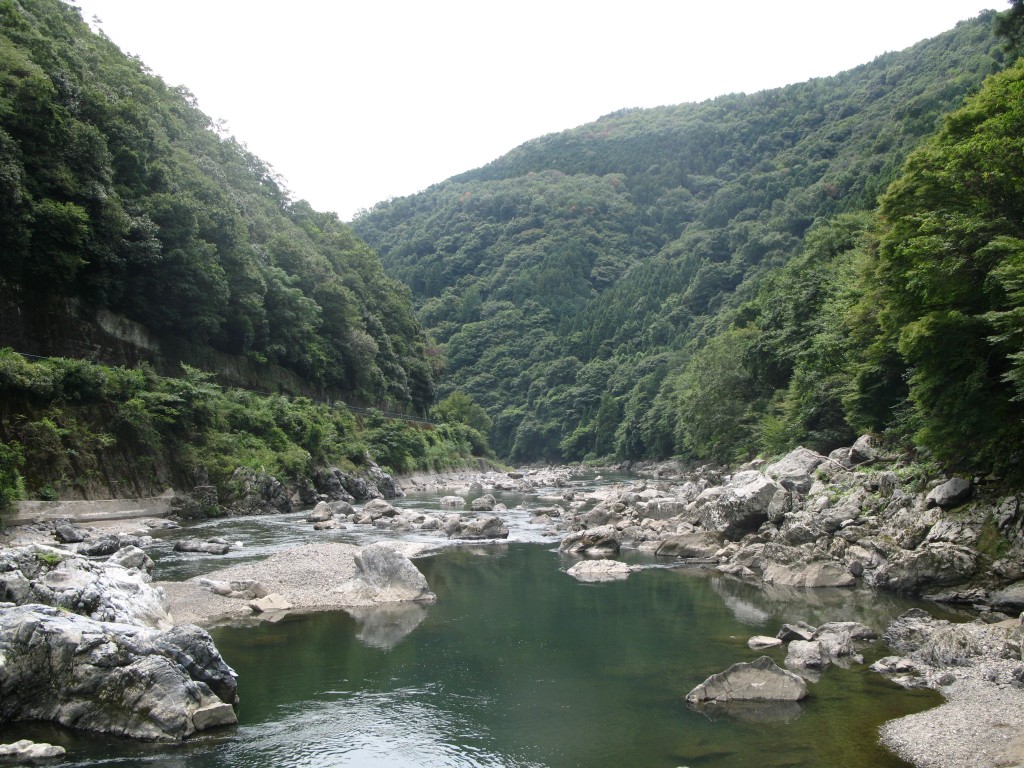 Stephen is a collector of beautiful stones which he uses in artworks. He was picking up a few along the way, but this one impressive though it was, was too big for his knapsack so he posed with it instead. 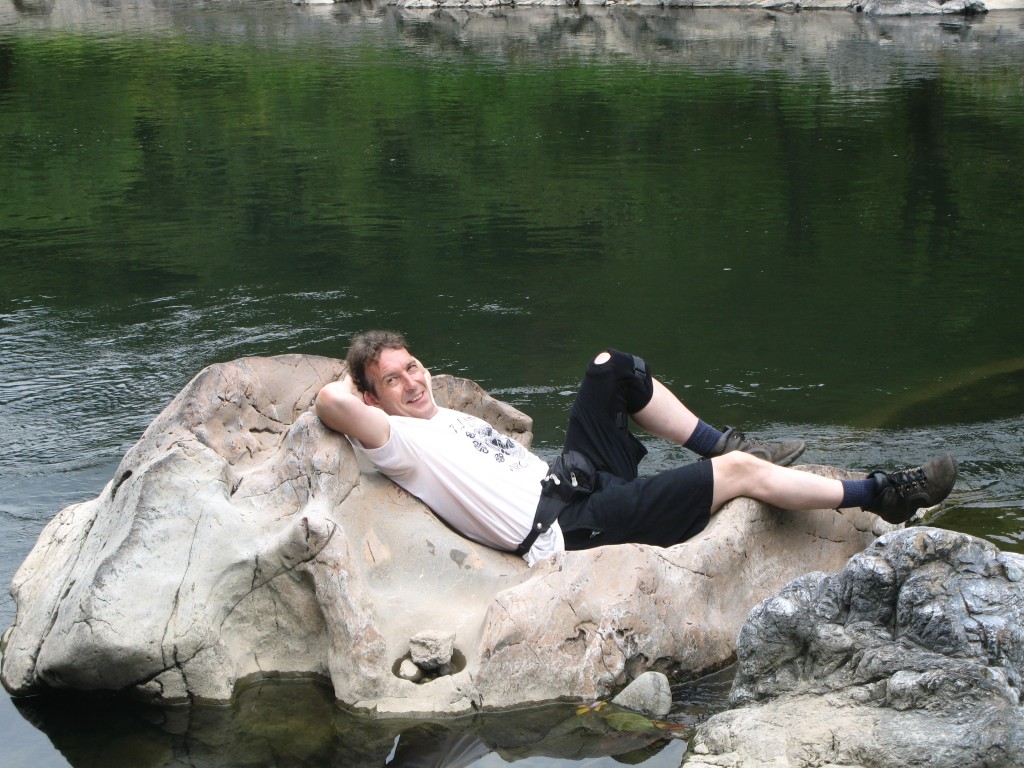 Creatures seen along the way: several herons, lots of monkeys, a lime green moon-moth (deceased), a large brown snake (slithering up a rock right next to Stephen’s head), river crabs, and boatloads of tourists. 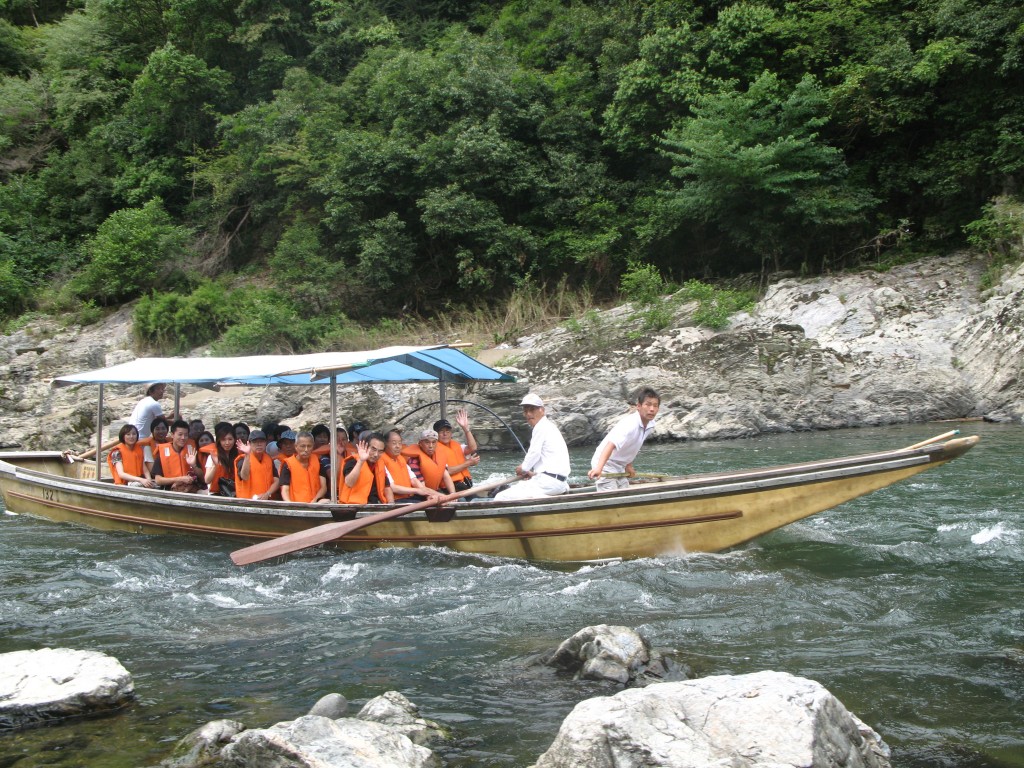 As the tourists passed in their boats we would wave and call out to them and usually (usually) they would wave happily and call back. When we got to saru-tobi-iwa (or monkey leaping rock) however, Maeda-san had a different idea.

We got a few laughs with that from the boats that went by. And then it was on with our journey…

As I said, some bits were a bit hairy. 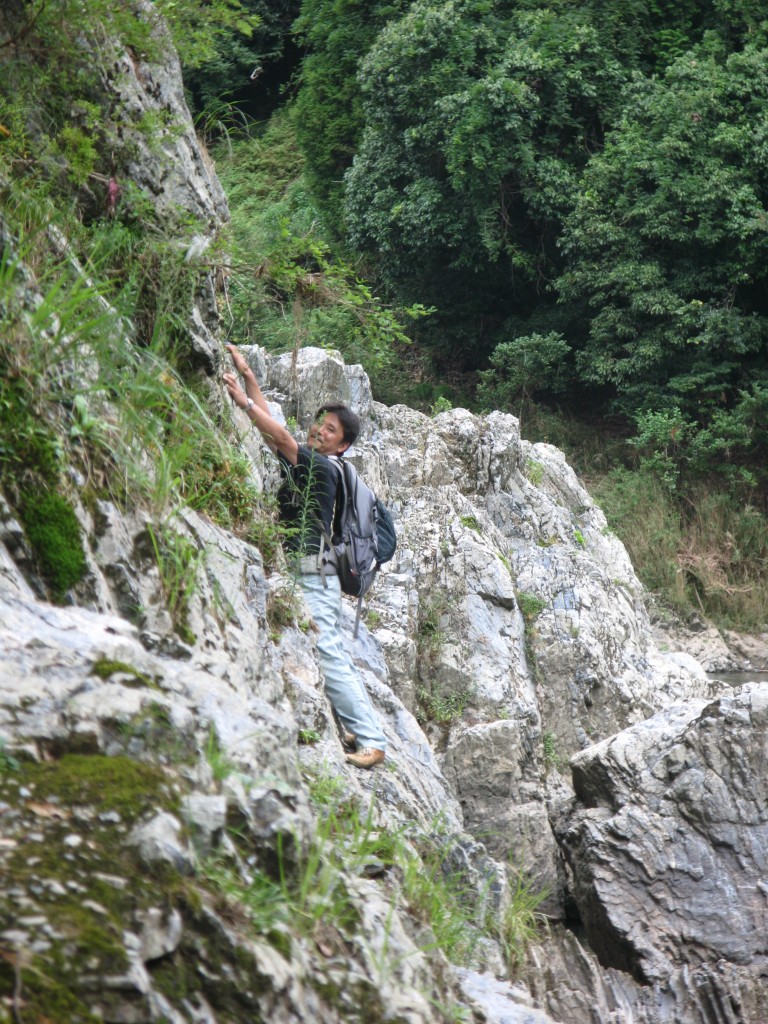 This is not a hike for the light hearted, neither should one attempt it on one’s own.

No problem for strapping young fellows such as ourselves though. 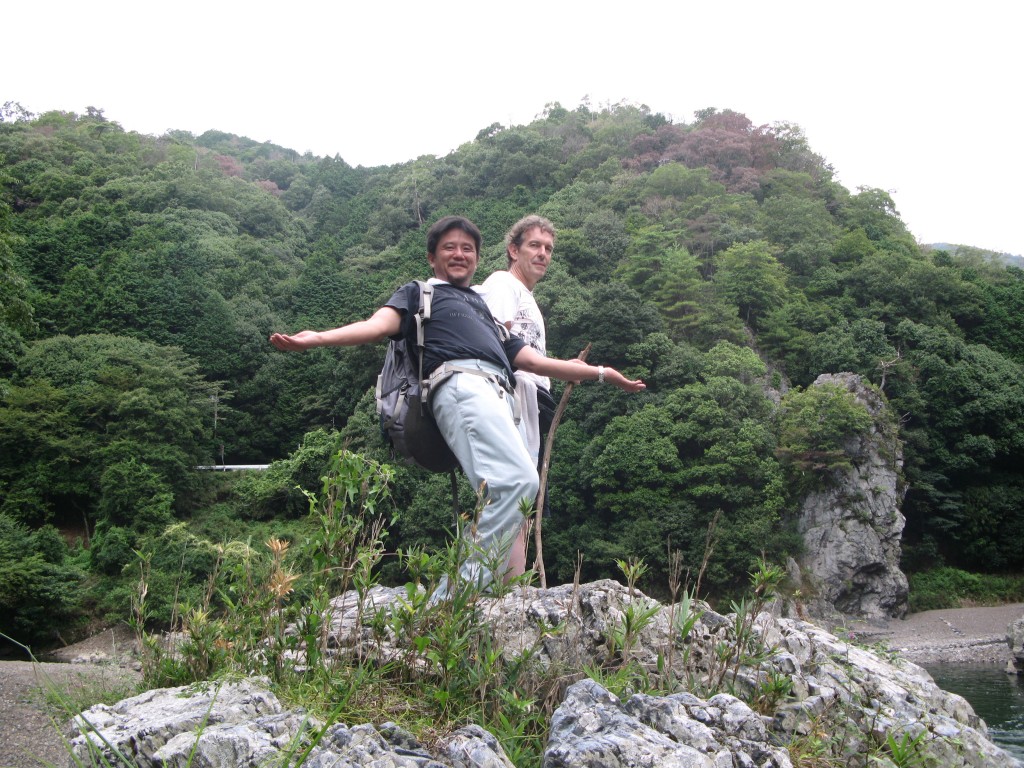 Towards the end of the walk it started to rain so we were keen to get up off the slippery rocks before it started coming down hard. We sought shelter in an old tin roofed eatery by the Hozukyo Torokko station where we had a delicious beer whilst watching the rain come down around us. Once it stopped we walked on to the JR station. We were granted some fine final views of the misty mountain before our journey back by train. 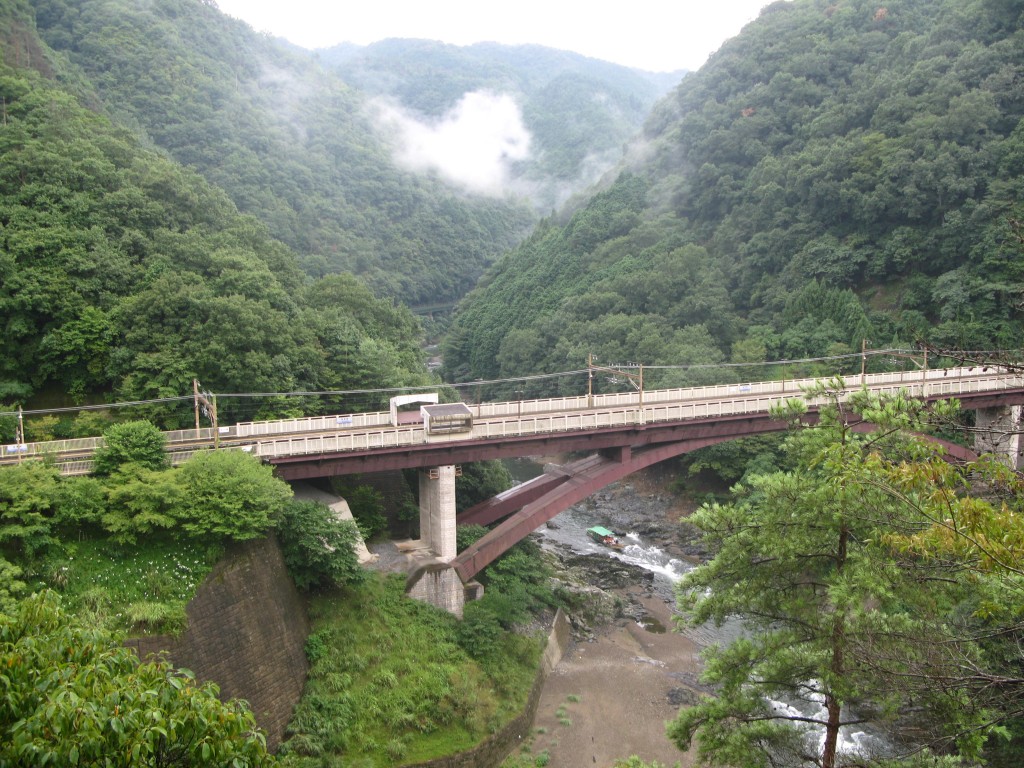 As I said the old Hozu towpath is in a very poor state of repair and shouldn’t be attempted if you aren’t in fairly decent shape or are afraid of heights! It’s a pity it hasn’t been maintained though, as a proper path along here for the general public would be a lovely attraction.

Many thanks to Stephen Gill and Okiharu Maeda for a very enjoyable day!