On Thursday night I attended the Hailstone Haiku Circle‘s English Haiku class for the first time and thoroughly enjoyed it! About 12 people were present including the British poet/artist Stephen Gill and Sean O’Connor an Irish poet/musician

. The first part of the class was taken up with what Stephen called the 添削コーナー (“correction corner”). Here haiku that have been submitted before the class anonymously are discussed by the class as a whole and under Stephen’s direction they are polished and perfected. In this manner a poem that starts out like this: 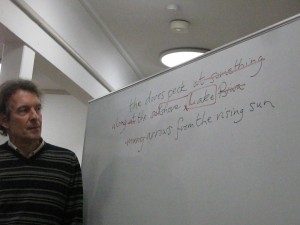 Autumn night
many stars in the sky
scatter onto the sea

Autumn night
some of its myriad stars 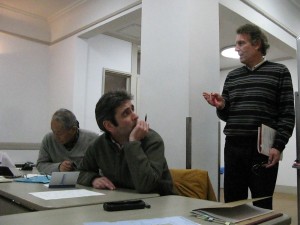 scattered onto the sea

And then the class will read the poem out together. There’s quite an emphasis on reading aloud in this class, which is important, if you want to get a feel for the rhythm of the language.

In the second part of the class Stephen and Sean took us on a whirlwind tour of Irish haiku, starting with the very first writer of haiku in Ireland Juanita Casey, a legendary traveling woman who wrote in the 1960’s.

Under the bridge
the stream –
the leaf and I,
travelers.

In Japan, haiku have often been written by wanderers such as Basho and Santoka, so it seems fitting that the first Irish haiku poet was a wanderer too.

Sean was keen to share with us this next poem by Padraig O Horgain:

The “Paps of Danu” are two hills in County Kerry named after the breasts of the ancient Irish mother goddess. What Sean wanted to share with us though, was a word on Hiberno-English grammar. What gives Irish speakers of English a quirkiness to their diction is a consequence of translating into English from the Irish language. Irish grammar he told us has a word order that is pretty much the reverse of standard English. Thus “the Paps of Danu rise” becomes “rise the Paps of Danu”. Interestingly, Sean said that familiarity with Irish grammar made Japanese grammar a cinch to understand as they are very, very similar.

Leap-Year Day:
approaching the pier, a seal;
its long eye-lashes

Jim Norton founded Ireland’s first haiku magazine “Haiku Spirit” in 1995. Stephen told us that Jim Norton is known for his realism and that pretty much everything in his poetry is taken directly from his life. Sean confirmed this by telling us that he was standing next to Jim Norton when he wrote this poem one February 29th at Howth harbor! Leap-Year Day though, is traditionally the day when women are permitted to propose to men. I couldn’t help noticing the femininity of those eye-lashes as the seal approached the pier and I wondered if there wasn’t a trace of the mermaid about it. Perhaps I am over-imaginative but for me this poem called to mind the legend of the selkie, those skin-shedding seal-women of Celtic myth who are famed for their heartbreaking beauty…

Well, as I said, it was a whirl-wind tour and there were many other fine poems read aloud and discussed that evening by such poets as Paul Muldoon, Seamus Heaney, Michael Hartnett etc… It was an enjoyable feast for the mind but at only an hour and a half, I felt like we had barely whetted our appetites.  Certainly I’ll be back for more in the New Year! Here’s one last poem from Sean O’Connor himself, notable for the physicality of its imagery and its gentle, wry wit:

Place: Friend Peace House, Kyoto (Meiji-style building 250m south of Imadegawa via the old gate to the west or the new gate to the east; equidistant from Keihan Demachiyanagi and Subway Imadegawa). 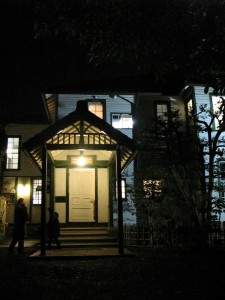 Here is a map.

Related:
Two Poems by Amano Tadashi
“A Lively Evening” by Murayama Kaita
One Hundred Poets on Mount Ogura, One Poem Each
A Hokku of Yosa Buson
Introducing Keiji Minato
Songs and Stories of the Kojiki retold by Yoko Danno