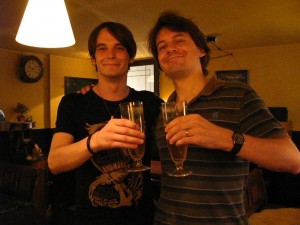 A few weeks ago, my old drinking buddy David Ewen and I set out to explore some of the bar culture in the Kiyamachi area armed with my copy of 京都穴BAR

(a Japanese pocket guide to Kyoto’s hole-in-the-wall bars). Actually I really recommend this book and others in the らくたび文庫

series (I have the cafe guide

too). For less than 500 yen you get a guide to 33 different bars and a very easy to use map to help you find them. Though it’s in Japanese, even if you can’t read it you can still get an idea of the atmosphere of each location just by checking out the pictures.

Before I take you through the tour I should say though that most of the people in these bars whether owners, staff or regulars speak little or no English. If you can’t speak Japanese at all, you might want to stop reading now. However, if you do want to speak Japanese, meet some locals in a friendly atmosphere, or if you are just tired of the usual foreigner hang-outs – read on!

The master, Yamaguchi-san, opened this bar 11 years ago and named it after the recording studio of his favorite musician: Larry Carlton. This is very much a musician’s bar; instruments bedeck the walls, a big double bass dominates one corner, and there are very often live shows here by musicians both local and from further afield. The prices here are reasonable (600 yen for a beer), and the atmosphere is one of elegant comfort. Yamaguchi-san, himself is a cheerful chap, hailing originally from Osaka. He kept us entertained with many an engaging story of his experiences whilst sipping at his favorite tipple: Four Roses. He told us that foreigners actually often come to this bar (some of them led here after meeting girls in a nearby Gion Irish pub!) but that as he doesn’t speak any English his staff or his regular customers sometimes have to help him out. Our only gripe with Room335 was we weren’t too keen on the “contemporary jazz fusion” being played here. It was a little too much like cheesy elevator music for our tastes. However, I took my girl Mewby back there a week later and the music was great

and as Yamaguchi-san has an enormous CD selection I’m sure you could put in a request.

Our Rating: Four stars. In every respect this was an excellent bar in which to start the evening. 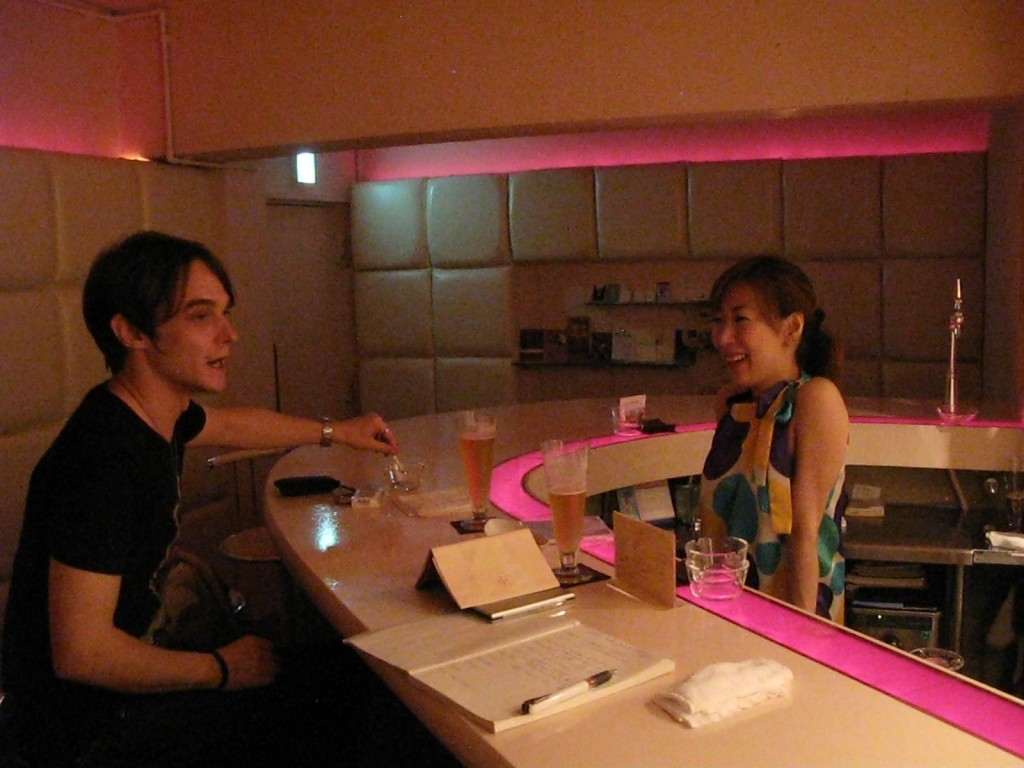 Hiromi Yuki-san the tender of this bar named it after her favorite design and so when working invariably wears a polkadot one piece dress. Opened only three and half years ago, she told us her regular customers were generally young single friends and aquaintances in their 20’s and 30’s. Indeed the 京都穴BAR

guide describes this as a bar suitable for ladies who are looking for somewhere to go by themselves (though that may cease to be the case now that I have written it here). The music varies according to the customers’ preferences but tends to be female vocalists such as Adele

. The atmosphere is one of  retro chic; white walls, a j-shaped counter with pink trim, calm simplicity.

Our rating: 3 stars. A pleasant enough location for a drink and a chat. And the prices are not too bad at 700 yen a beer, but the seating charge of 500 yen kind of bites.

Location: A fifth floor bar between Kawaramachi and Kiyamachi (closer to Kawaramachi, three streets down from Sanjo on the south side. Here is a map.
Open: 8:30 pm ~ around 3:30 am
Telephone: 075-212-0314 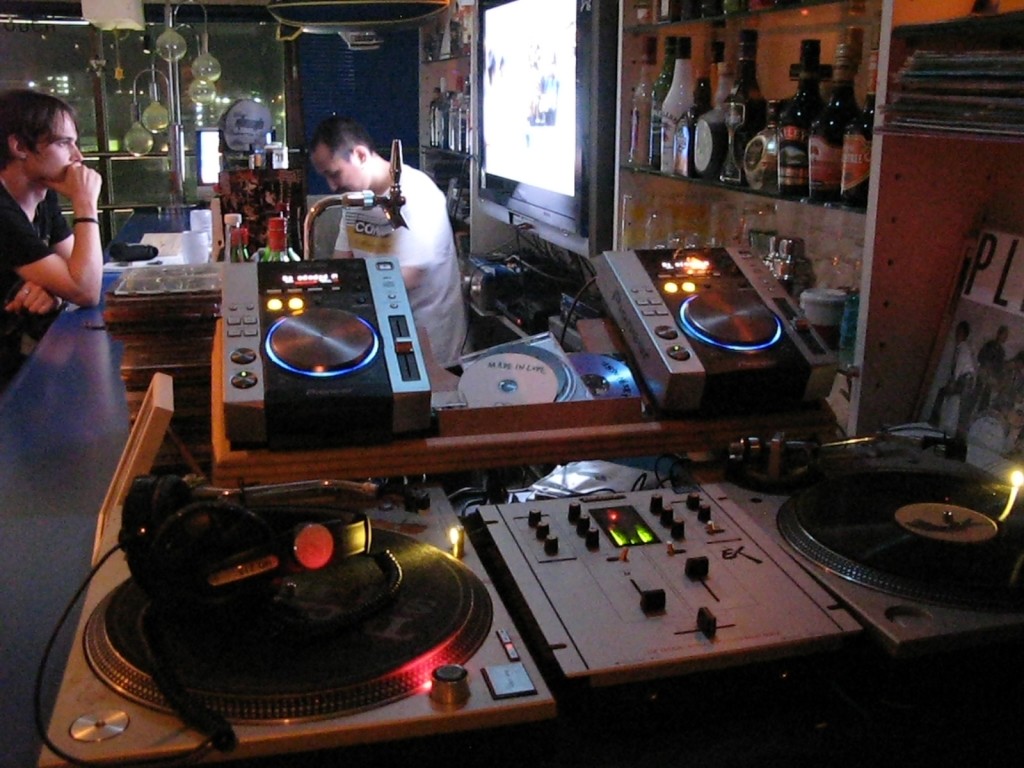 “Still” was the name the master Nakayama-san went by in the days when he fronted his own hardcore hip-hop band. Four years ago after having worked ten years in the used clothing trade, a friend of his gave up the bar and Nakayama-san decided to have a crack at it himself. He spent

a lot of money renovating the place though, and installed an impressive set of decks to testify to his continuing love of the music. He told us that most of his customers are DJs, or people who are interested either in music or in sports.  When I asked him if he would like more foreign customers he said yes, as long as they can speak Japanese (and hadn’t been getting wasted and obnoxious in the popular foreigner hang-out on the second floor). Prices here are reasonable at 600 yen for an Ichiban Shibori.

Our Rating: Three stars. Truly a hole-in-the-wall place. If you like hip-hop and want to talk about Dr. Dre in Japanese then this place is for you!

Location: Halfway down Kiyamachi on the west side, on the 7th floor of the Royal Building (the same building as the better known “Rock Bar Ing”). You should recognise the area because of all the hostess and “kyabakura” girls hovering around outside and of course the dodgy-looking guys in dodgy-looking suits. Here is a map.
Open: 8:00 pm ~ around 6:00 am
Telephone: 075-212-3352

UPDATE 2011 – Akira-san has now moved back to his hometown in Wakayama, so sadly Tracks has now closed.

Actually, this wasn’t my first visit to Tracks. I’ve been here a few times and loathe though I am to give away all my secrets, I have to tell you: this is a very good bar.  I think this is mostly due to the personal charm of Akira-san, the master. He’s friendly, in a calm easy-going kind of way, and he also mixes an excellent cocktail. “I’m tired of drinking beer,” I said, “And this here  京都穴BAR

says that this is a bar in which to expand your knowledge of booze! Could you give me something to wake me up?”  So he gave me a gimlet, mixed with the French liqueur Suze. A delicate balance of bitter and smooth danced across my tongue.  “Wow,” I thought, “He’s pretty good”. I asked him: why “Tracks”? “Tracks” he said, means わだち or あしあと in Japanese. This bar is a crossroads for many different people, following many different paths in their lives. And where people stop and meet, tracks tend to remain… As if to confirm this we discovered that the young couple seated at the end of the counter had just got married that day. We ordered more cocktails and merrily congratulated Mr. & Mrs Kusama on the confluence of their paths! It’s very easy here to take a seat at the counter and strike up a conversation with someone new.  Akira-san has created a cool, calm, relaxed space in which to stop and sit and meet people.

Our rating: Four and half stars. I was tempted to give it a five, but as David said, there’s no such thing as perfection. That gimlet was pretty close though.

This place probably isn’t to everyone’s taste. It’s narrow, cramped, kind of shabby and everyone in there was pretty worn looking. In other words, heaps of character! Both David and I love places like this. In fact David commented that it reminded him of an old Deep Kyoto favorite: Tsurugi. The master Numa-san named his bar “Jey’s” after the bar in the Murakami Haruki novel “Hear the Wind Sing”, which only served to endear the place to me more. Here we settled back in our customary beer drinking ways with bottled Sapporo and listened to some Japanese style blues.  Famed Osaka musician Ariyama Junji is an occasional visitor apparently.

Our rating: 3 stars. Not to everyone’s taste but we liked it.

Galaxie 500 is in the same building (たかせ会館) and on the same floor as Jey’s. Actually, it’s not in the 京都穴BAR

guide (though it is in this one

that we just had to go in. The master Hashime-san, himself a former punk band member started this bar seven years back. He places his own musical roots very firmly in New York punk and No Wave so the music of Patti Smith

, and influential synthpunk duo Suicide are prominent. But from thsi Hashime-san’s music collection expands out to anything with an alternative or psychedelic edge. Hashime-san told us that foreigners often come here on the weekends but those that come can usually speak Japanese pretty well.

Our rating: Four stars. A good place to expand your musical horizons.

Location: Go north on Kiyamachi from Shijo, take the second street on your left, then take the next turning on your right. The たかせ会館 building is on your left. Galaxie 500 is on the 2nd floor. Check the map for Jey’s above.
Open: 8:00 pm – 3:00 am (Closed Sundays) 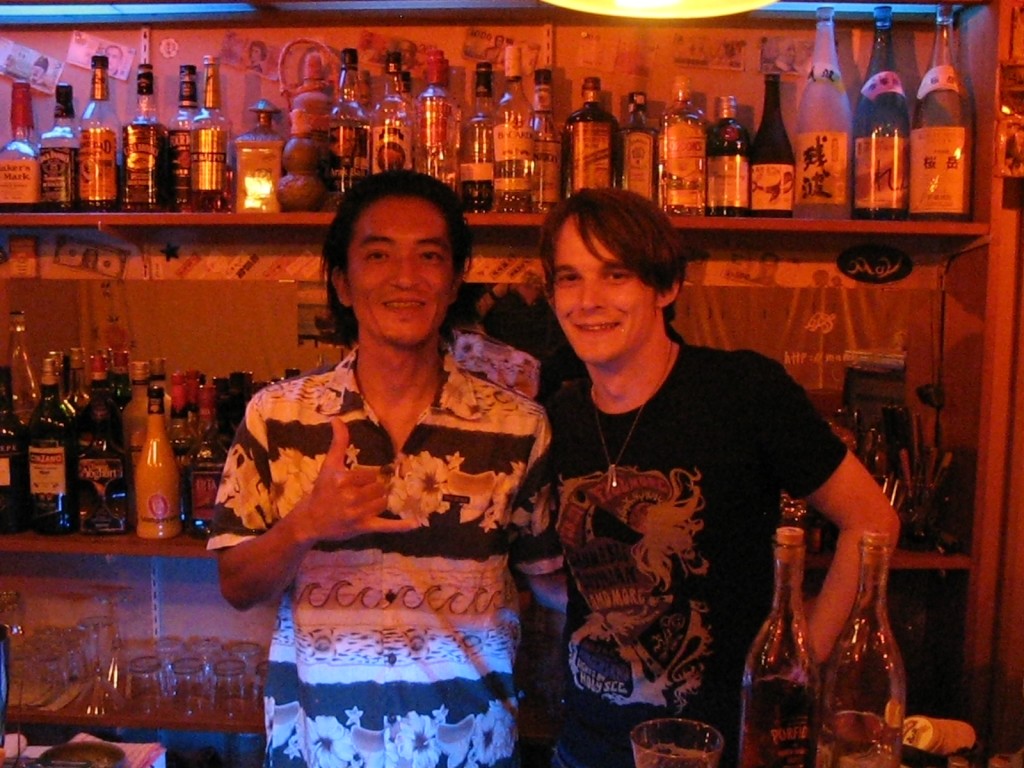 Basically the たかせ会館 building is chock-full of interesting bars. We wandered into this one simply because we liked the sound of the name. It turns out that shot bar Manly (since 1997) is named after the famous beach location Manly, in Australia. The master, Hamaa-chan, loves the sea and has decorated his bar in a South East Asian style. In here, he says, it’s always summer. Here are a few disparate factoids for you. The music here tends to lean towards 80’s rock and Hama-chan’s favorite is Green Day

. Manly gets a range of customers from people in their 20’s to those in their 60’s. A few tourists wander in occasionally and Hama-chan says he can cope with very simple English. One more thing he asked me to tell you: cash only, no credit cards please! Check the website for the drinks menu.

Our rating: 3 stars. A pleasant spot for a drink and Hama-chan has a very sunny disposition.

Hama-chan’s message: 本当にフレンドリーな店です。誰でもちょっとアンダーグラウンドのローカルショップの強いバーですけど来てください。
Location: Go north on Kiyamachi from Shijo, take the second street on your left, then take the next turning on your right. The たかせ会館 building is on your left. Manly is on the 1st floor. Here is a map.
Open: 8:00 pm ~ 4:00 am (closed on Tuesdays)
Telephone:075-212-8891 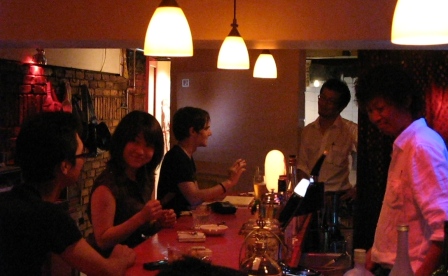 Finally pulling ourselves out of the たかせ会館 building we walked south across Shijo to Jelly Beans Rocket. I was curious about the name – it turns out to be a homage to Kyoto born illustrator and masked rock n’ roller Rockin’ Jelly Bean. Ten years ago the master, Aoyama-san opened this bar and named it after his sempai. Previously Aoyama-san had worked as a cook so this is a dining bar with quite a few tasty looking items on the menu. The atmosphere was young and Aoyama-san told us the regulars tend to be people who work in the neighborhood, in Hankyu department store or local restaurants and bars. As for music, I heard a lot of 90’s pop while I was there, and Aoyama-san proffesses himself to be a Doobie Brothers

fan, but basically anything goes. What’s most important, he says, is having a laugh.

Our Rating: Four stars. This place is fun.

By this stage David and I were both pretty tired of interviewing and taking pictures and (besides my notes were becoming unreadable) so we retreated across town to our old favorite Tsurugi for one last night cap. But that would be another story for another time.

Related: David & I tour Kyoto’s Irish pubs – In Search of the Craic.
Ian Ropke’s Along the Takasegawa.