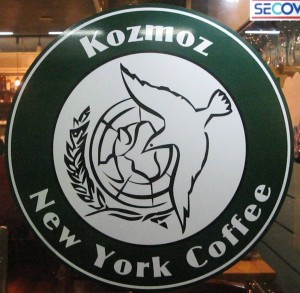 Kozmoz New York Coffee is an American style cafe/diner tucked away in Fushimi Momoyama, that specializes in such dishes as the Philly Cheesesteak, the Hot Italian Sausage, bagels, muffins, apple pies and cheesecake… What makes this establishment a little bit different from other cafes though, is that every yen made from your hotdog or cheesesteak, (and also all the profits from the Kozmoz English school  upstairs), goes towards a good cause: funding social outreach programs and providing aid and assistance to those pockets of poverty and inequality that local government and bureaucracy have failed. According to Kozmoz International’s Director, Barry Wyatt, Japan has the same relative poverty rate as the U.S. and the U.K. with the most needy groups being: the elderly, single parents, and poor working families with children under five. For these kinds of people Kozmoz has been operating food banks and pantries where people can pick up boxes of groceries. Barry states the charity’s goals as “simply to feed the hungry and clothe and house the poor as well as bring awareness of these needs to those that can help.”

Since March Kozmoz International has also been trying to raise funds and supplies for the disaster zone in northern Japan. Barry writes,

Driving our aid truck to the disaster area since March has been like going between alternate universes every week. Just a couple of hours from the disaster zone people are going about their daily lives as if nothing has changed, while just miles away the devastation in both property and lives is beyond description. We have taken nearly $40,000 in food stocks directly to the shelters in the disaster zone but seeing the depth of the needs and the lack of progress makes me feel that we have to do more, much more…(LINK)

To draw attention to the continuing plight of the Tohoku refugees, Barry and his friend Bernie M. have committed to sharing their hardship by undergoing a 40 day fast, taking no solid foods and surviving on vegetable juice and vitamin tablets until either the deadline is up or they raise $25,000 dollars in donations. They are now on day 17 (and Barry has lost 10kgs). Last week I went down to the Kozmoz cafe to meet Barry and find out more about his work.

Naturally, (being an ass) I also wanted to check out the cafe’s food. Here on the left is a picture of the bean-filled tostada I ate in front of Barry as he literally starved before me. It was actually a pretty good tostada. At that time Barry was a full eight days into his fast, so I did ask him if he minded me eating while we talked “Go ahead man!” he said with a smile,  “I’m in the zone!”

Barry hails originally from L.A. but was living in Spokane, Washington State when he underwent a crisis that fundamentally altered his life’s priorities. In the space of just three days, he lost his job, was diagnosed with cancer and underwent drastic surgery to remove a tumour. This was followed by a tough course of radiation treatment. Though Barry rebuilt his life after this traumatic experience, getting a new job in the construction business and becoming a qualified architect, he also became more and more active doing volunteer activities with his local church. He joined programs taking prisoners on parole into his home, so that they could reintegrate into society, and also training illegal immigrants so that they could gain the necessary language abilities and working skills to return to America legally. He also travelled frequently to Mexico building homes, and delivering food and medicine. At some point he came to a realization: “My personal faith led me to believe that charity was the area where I wanted to express my existence.” And so he decided to become a full-time charity worker and founded Kozmoz International in 1987. “Ever since,” he says, “I’ve really enjoyed my life.”

Kozmoz International’s work is also in large part about promoting cultural exchange and language training. Barry believes that many of the social ills that plague the world today are the result of unresolved conflicts between cultures and that these will never be resolved unless people become more culturally aware and thus able to seek forgiveness. Barry himself became interested in Japanese culture after hosting a Japanese junior high student in America. On moving to Japan though he discovered that Japan suffers from the same social inequalities as America. An estimated 10 million Japanese are living below the poverty line and the majority of these are not the homeless but the working poor. [Read more about poverty in Japan here]

Though the roots of Barry’s personal commitment to charity are in his own Christian faith, he is keen to point out that Kozmoz International itself is not a religious charity and its volunteers are of many faiths or none. Their goal is to create a model, self-funded, charitable enterprise without soliciting support from any governmental, political or religious organizations. And as Kozmoz staff are all volunteers (Barry himself draws no salary), and all overheads and costs are covered by fees from their educational programs in Japan and abroad, 100% of donations received for Tohoku go directly towards feeding people in the Tohoku refugee shelters. As Barry makes plain on his website the need is still dire:

This is the situation Barry is trying to draw people’s attention to. There is certainly no doubting Barry’s personal commitment to his fast for Tohoku, or that of his friend Bernie who says,

It’s our island man! People need to do something. How can people just go on buying and shopping and eating out as if nothing has changed? I could understand it if these horrific conditions were half way around the world, but these people are family. (LINK)

To learn more about the work of Kozmoz International please visit their website here.
To make a donation of food or supplies click here.
To donate funds for Tohoku click here. 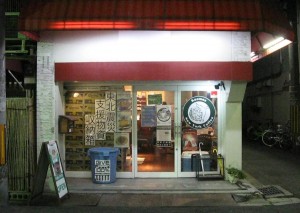 To find their cafe and enjoy some fine New York style coffee or other tasty treats please visit Fushimi Momoyama. From the station head left (west) and walk along the shopping arcade. Take the fourth road on the left and you will see a large store named PLAZA on your left. The Kozmoz cafe is directly opposite on your right. Here is a map.