This is the second of two pieces on Tango, the northern seacoast of Kyoto prefecture. In the Part #1 I recounted last year’s trip to the beach at Kotobikihama and our fortuitous view of a fireworks display at Amanohashidate. In this post: a winter trip to Kumihama, climbing a holy mountain and all the crab you can eat!

In the first week of the New Year Mewby and I joined Stephen and Kazue Gill for a road trip up to Kumihama, on the Tango seacoast. Stephen had told to me that Kumihama was probably his favorite location in Japan. There was a mountain there that held a very special spiritual significance for both him and his wife. Something you had to experience personally to understand. It was also the location of fabulous crab cuisine. “You must try the crab there!” he enthused. And so together we went.

Though we had planned to climb the holy mountain on the first day, the weather defied us, with endless veils of rain. The nearest we got was to the foot of the mountain, where there is the most extraordinary restaurant serving very fine food indeed. I say extraordinary because this is in the middle of rural nowhere, and then suddenly at the foot of a hiking trail, where you might expect a little service area or cafe – a big posh restaurant called “Reception Garden“. Most of the food is light western style fare, albeit making imaginative use of local ingredients. Kazue’s meal was the most interesting – a wild boar tagliatelle. 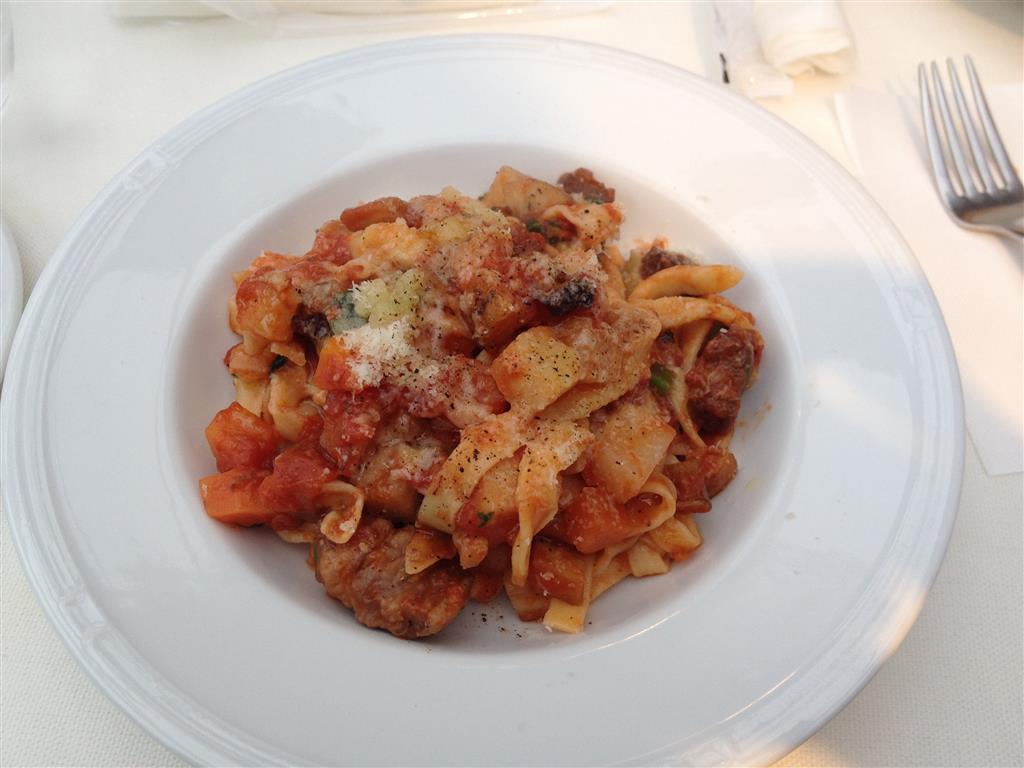 There was also a marvellous view from our table of the lagoon and surrounding mountains. This restaurant though is part of the Holiday Home Hotel which is undergoing some ongoing renovations, and we were told the restaurant and view might not be the same when we next pay a visit. 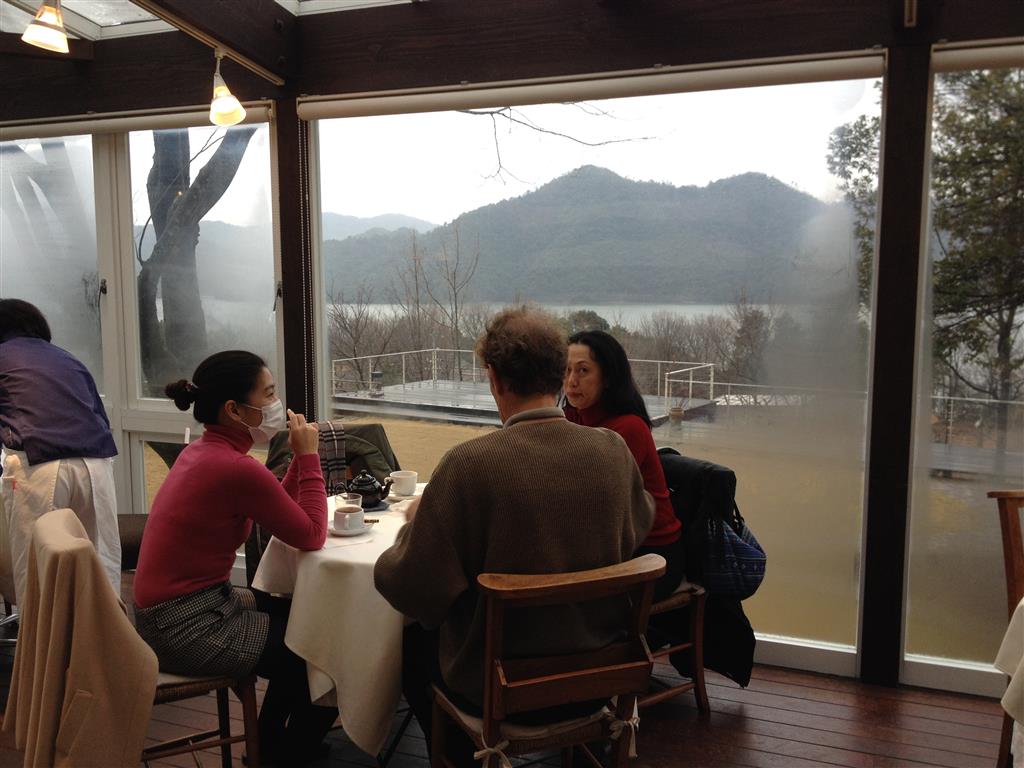 Well, we couldn’t do much outside because of the rain, so the early afternoon was spent visiting a friend of Stephen’s – a most interesting potter who lives in a beautiful house at the foot of the mountain. A man dedicated to his craft, he spends several hours each morning working on his garden (gorgeous garden) to mentally prepare himself for his day’s work. His work is beautiful and has much spirit. After leaving the artist’s home we went to our hotel and enjoyed a hot spring bath. We were staying in the Hekisui-en hotel which was comfortable and reasonably priced. The Hekisui-gyoen next door though had some nice views from the lounge. 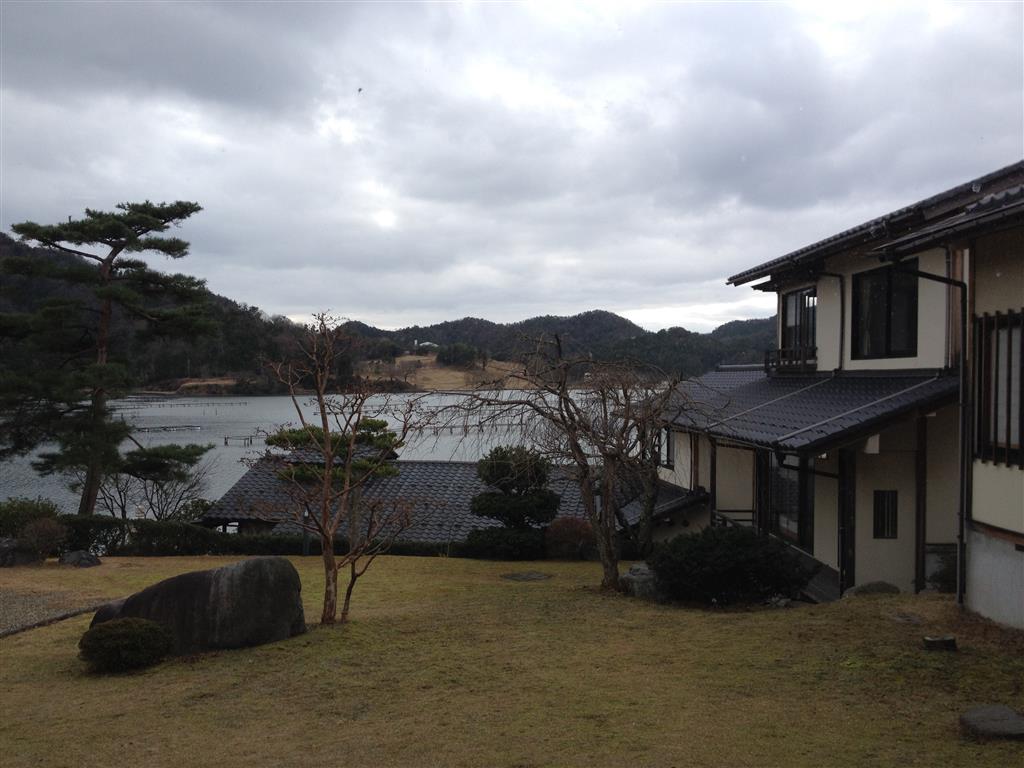 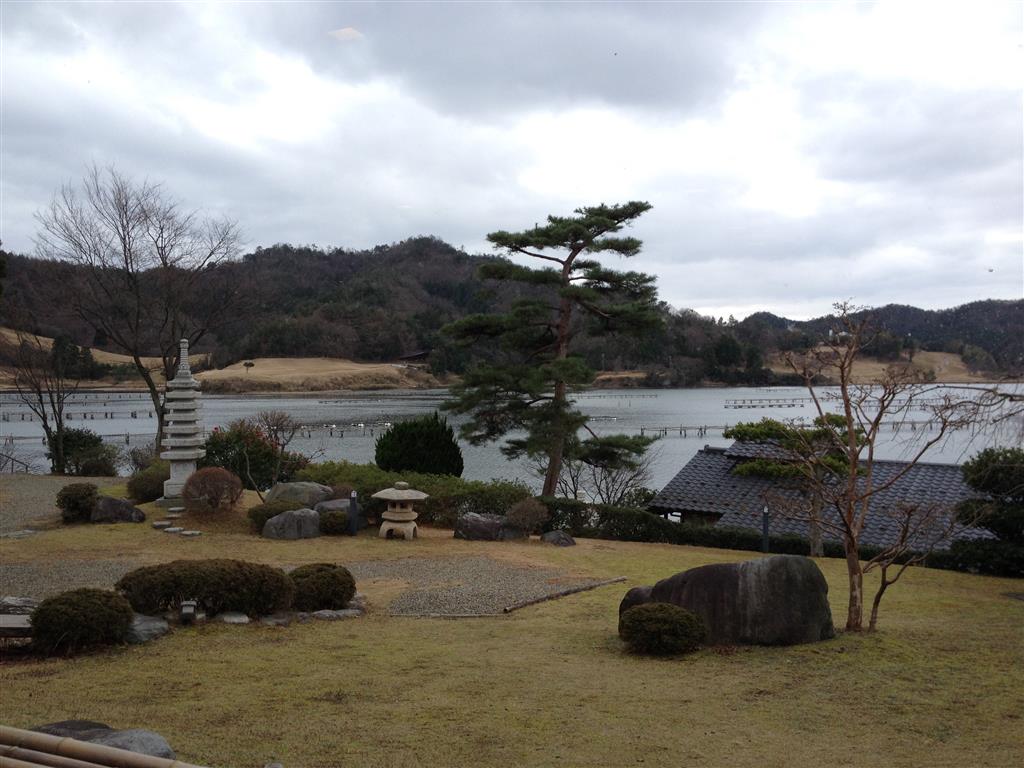 And then it was time for crab! If you like crab, then you should definitely visit Kumihama in the winter. Our dinner was fantastic. Here are some images from our dinner to whet your appetite. 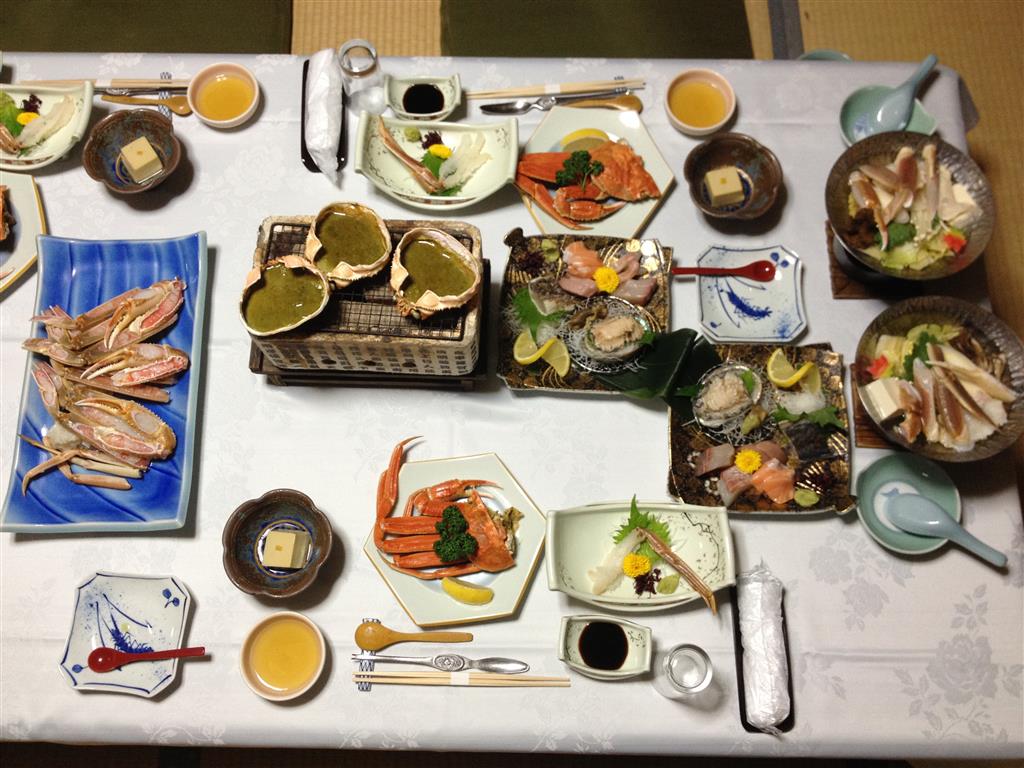 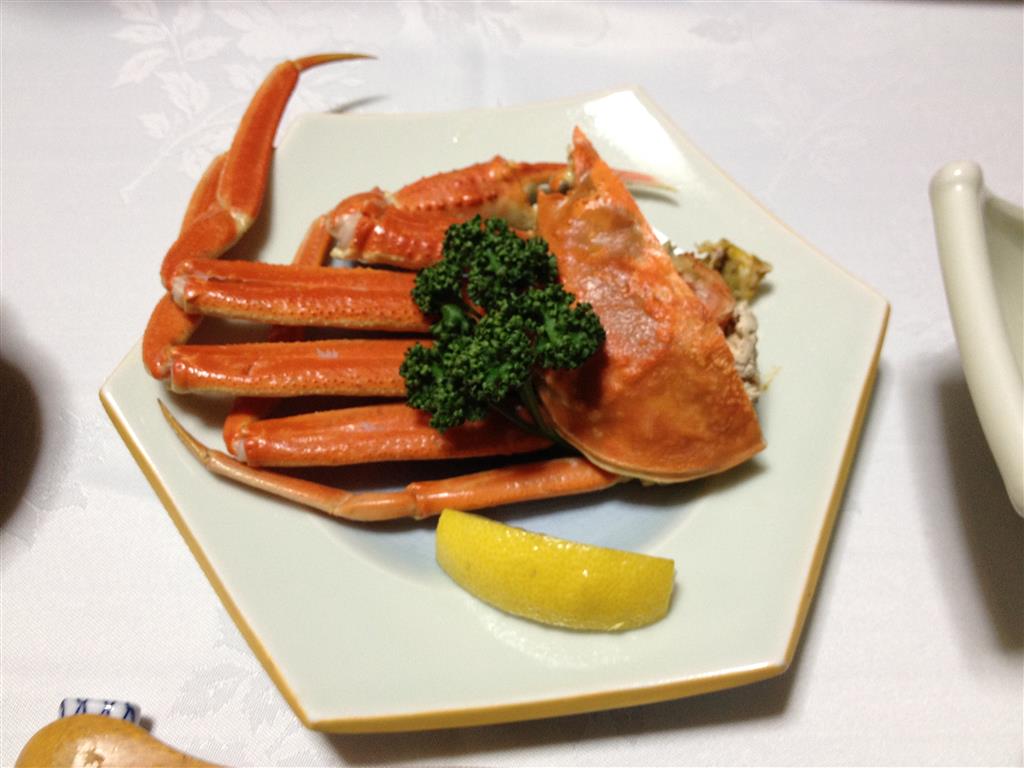 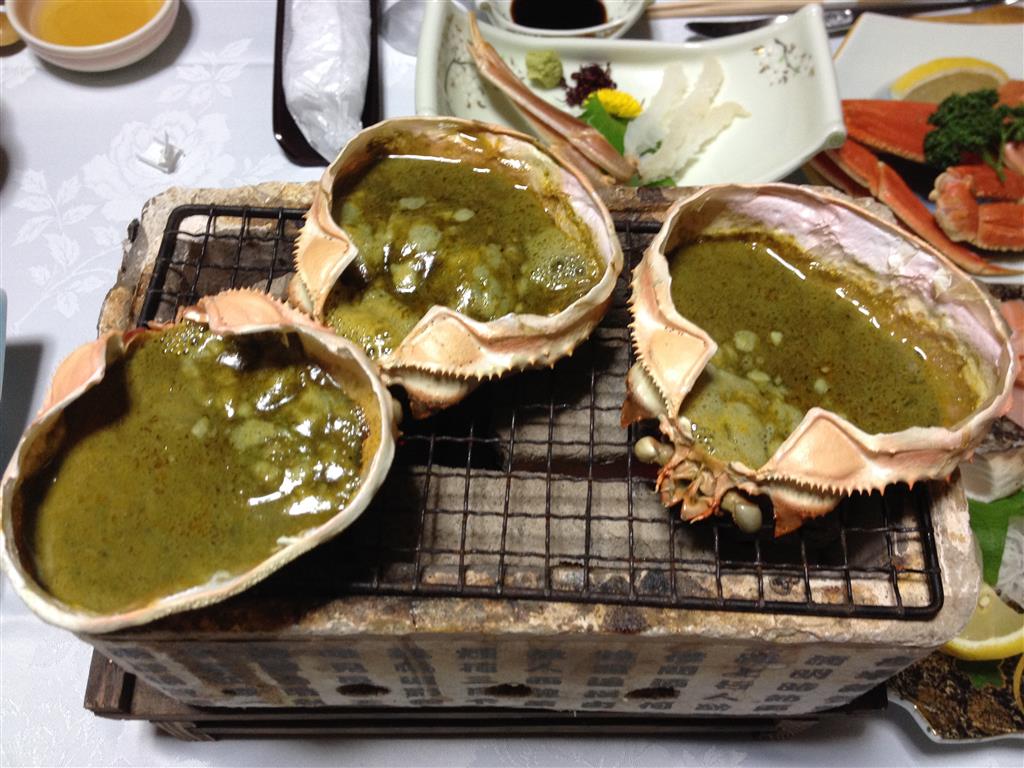 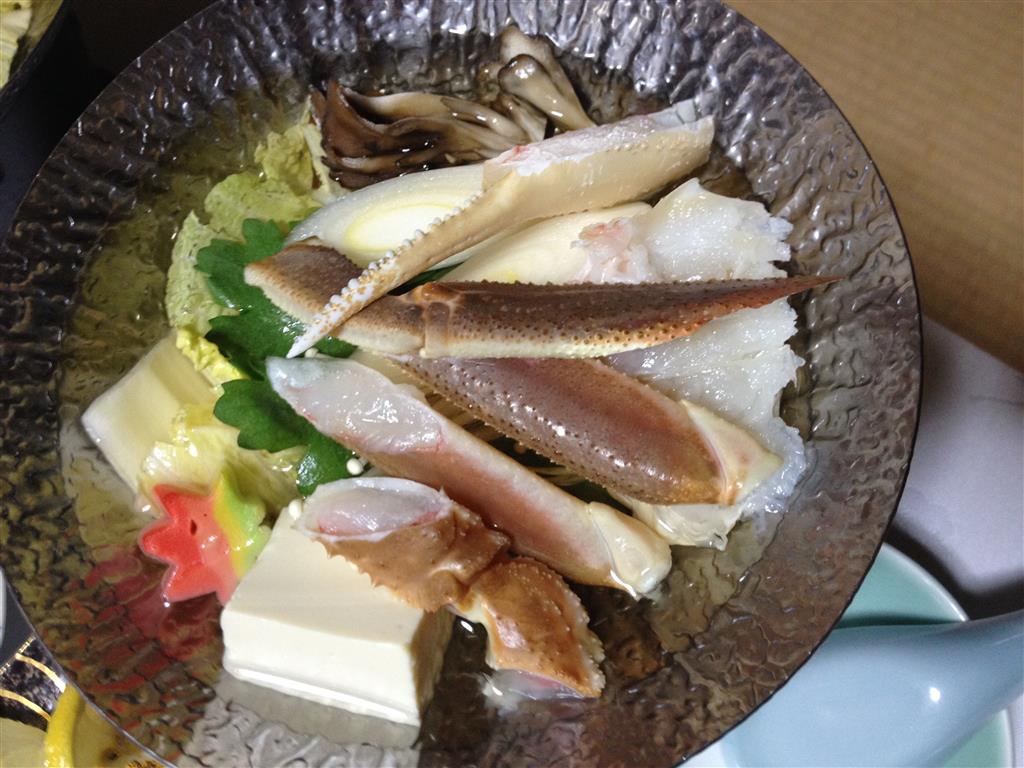 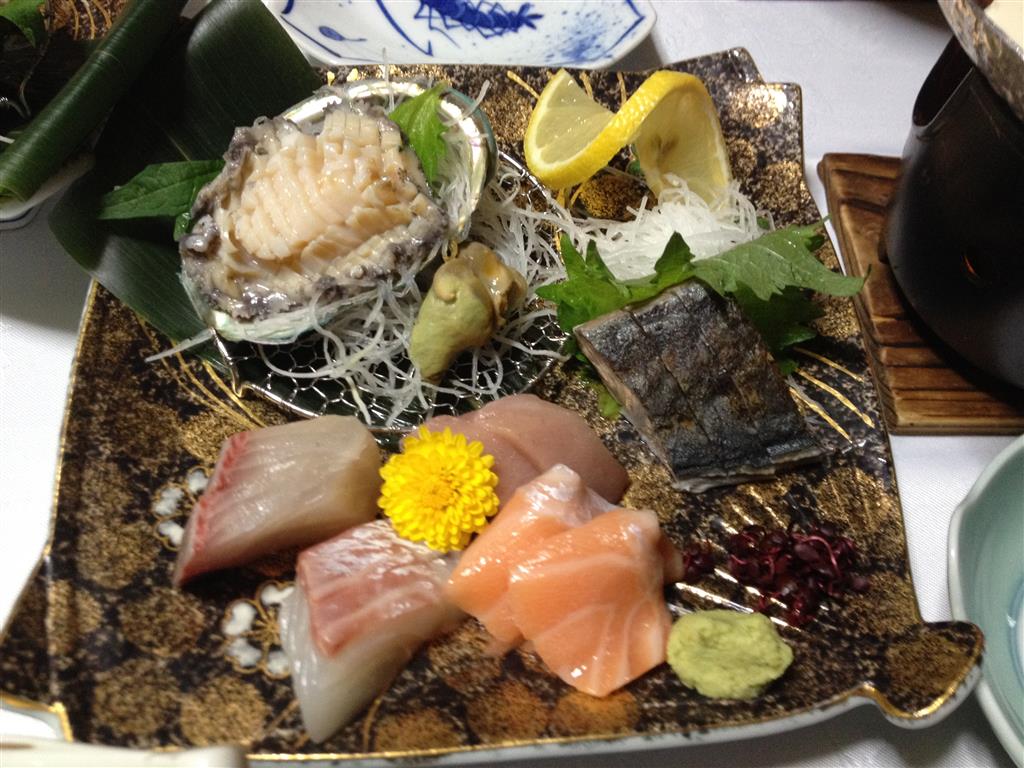 Breakfast next morning wasn’t bad either. 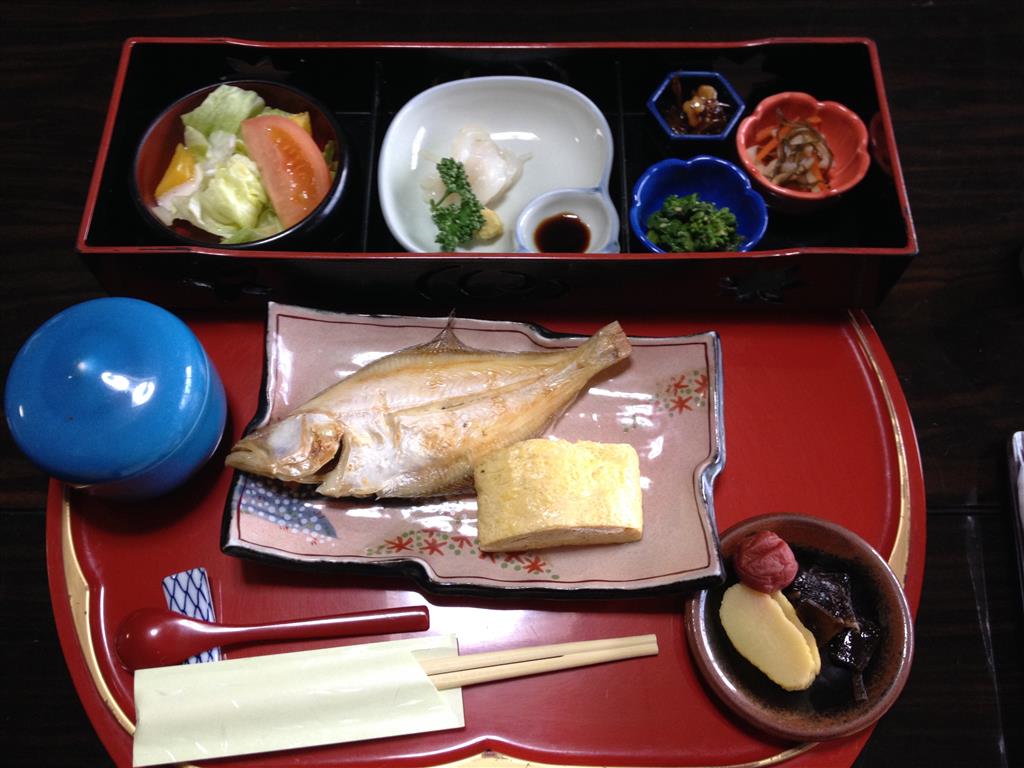 After breakfast, the weather having let up, it was finally time to climb the mountain with Stephen and Kazue as my guides. Unfortunately, Mewby had caught a nasty cold, so she stayed back at the hotel and had another soak in the hot spring baths. 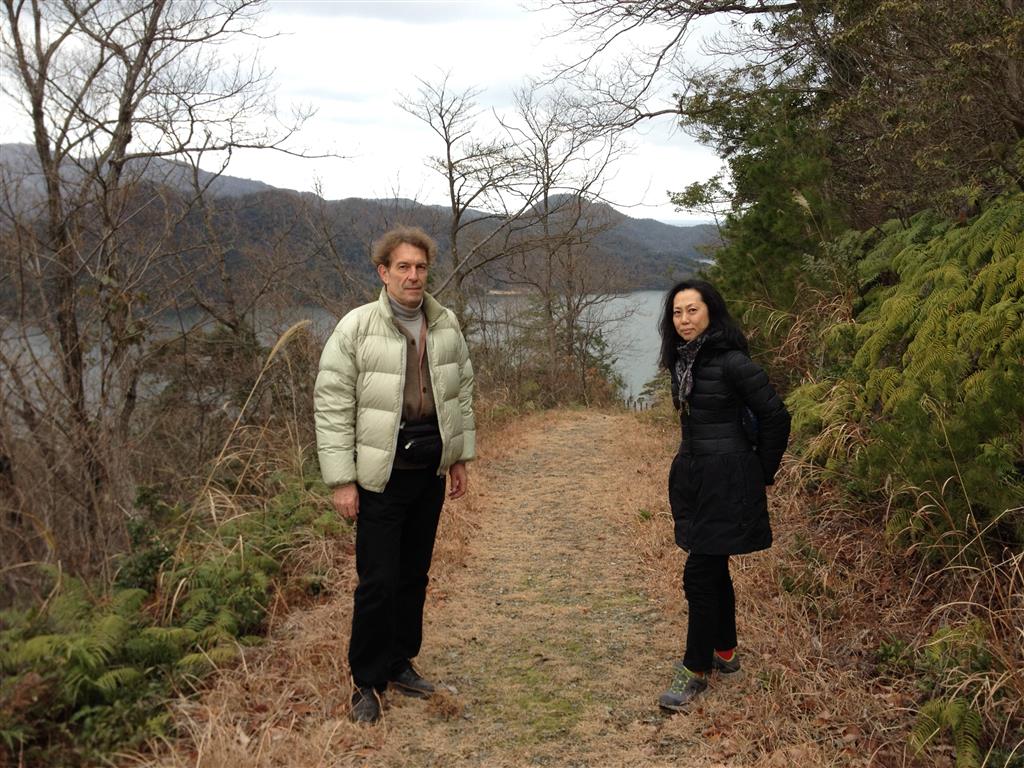 Part way up the mountain there is a massive rock projecting from the slope which is named 人喰い岩 “hito kui iwa” or man-eating rock. Kazue surmised that it was given this name to instill respect in the locals for this sacred place. I prefer to think that the rock sometimes detaches itself from the mountain, bounds down the hill to gobble up unwitting passersby and then bounds back up again with a nonchalant air. Whatever the truth may be, Stephen was careful to say a prayer before climbing up on to it to admire the view. 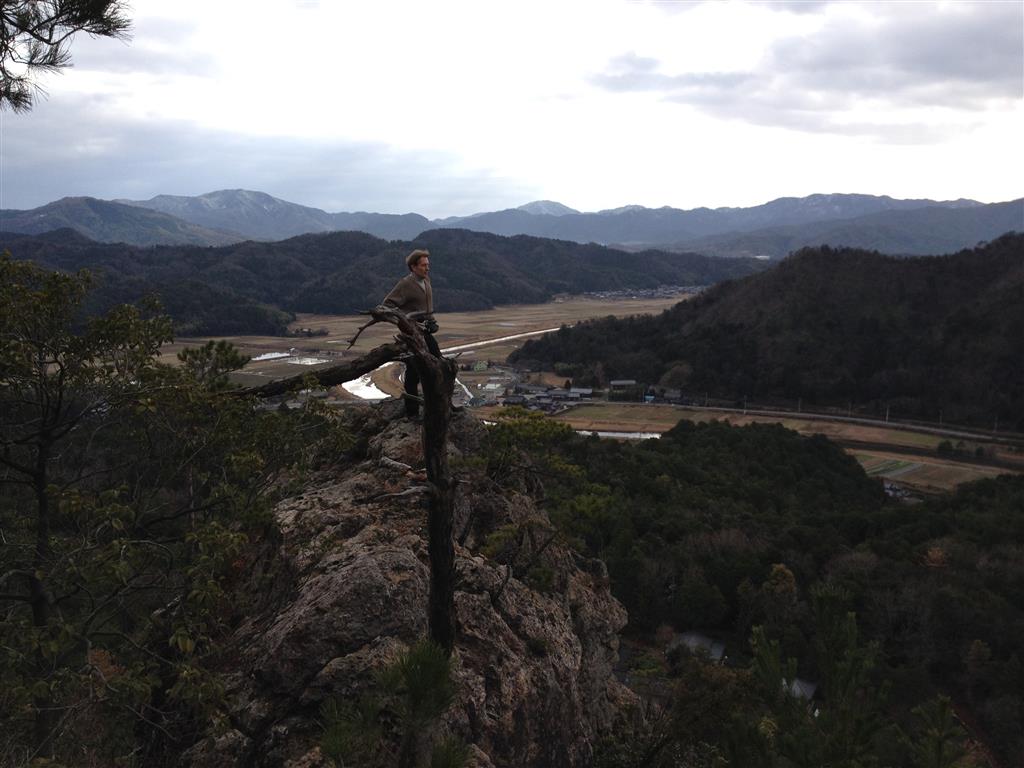 The shrine at the top is dedicated to the mother goddess Izanami; she is the goddess of creation and of death. The current shrine building may not look like much, but this is an ancient place of worship. The legendary empress Hibasuhime is said to have founded the first shrine here a thousand years ago, at the time the Yamato clan was tightening its grip on the Tango region. Here we said our prayers before sweeping up a bit to spruce the place up. Some brooms had been left there just for that purpose. 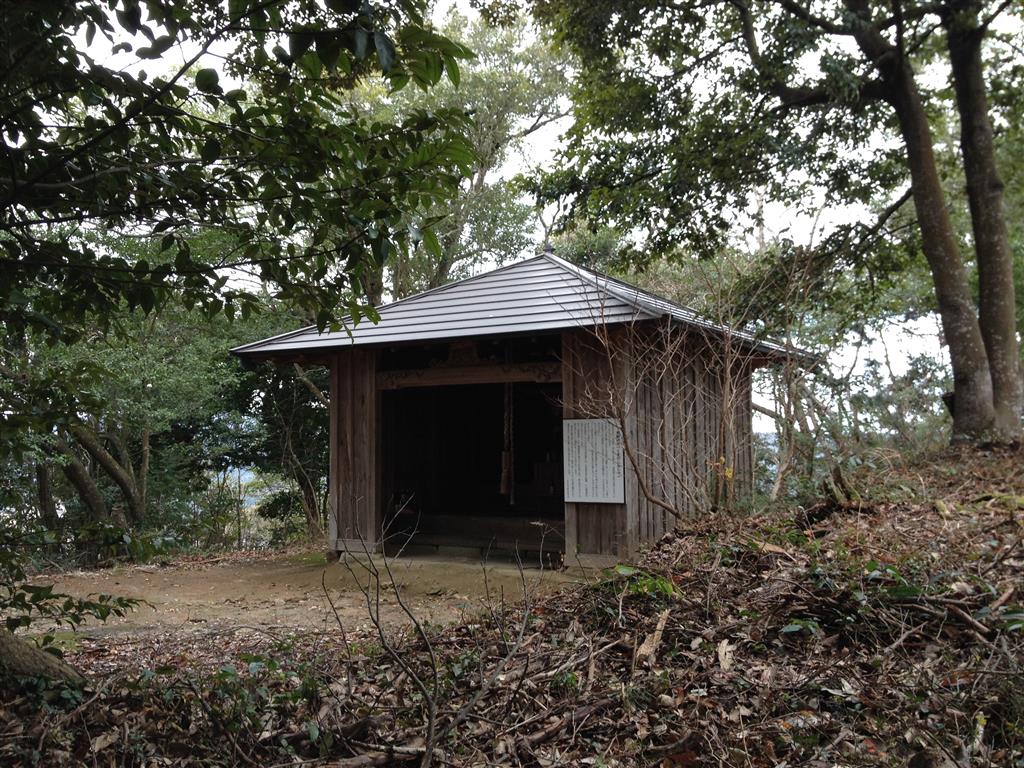 And then to enjoy sweeping views over the lagoon and the sea beyond while a fresh sea breeze swept out our minds! It really is quite beautiful up here.

That sand spit that separates the lagoon from the sea is called 小天橋 “Shotenkyo” or little bridge of heaven: a kind of mini version of the more famous heavenly bridge at nearby Amanohashidate. Many thanks to Stephen and Kazue for sharing this special spot with me. Apparently there are plans to build a large viewing platform and facilities up here to encourage tourism… It seems a tad unnecessary, but here’s hoping the authorities are respectful of local people’s wishes, of the shrine’s long heritage and of the natural unspoilt beauty that surrounds it. 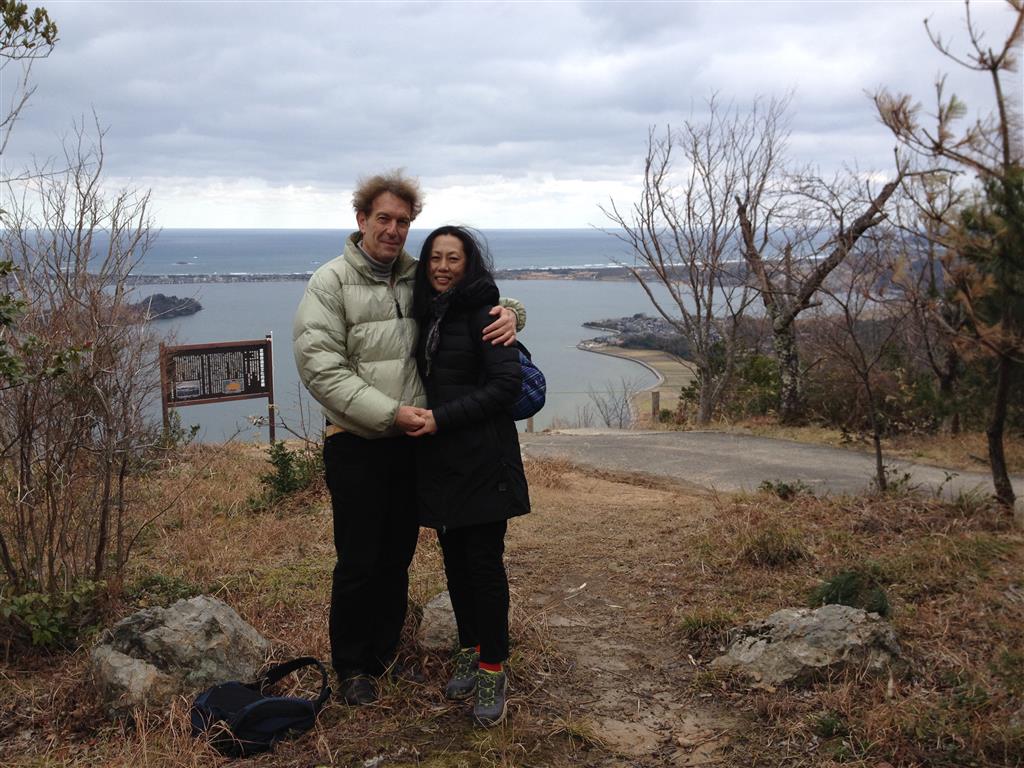 Regretfully, as Mewby was poorly, we decided to cut short our trip and go home early by train – while the Gills continued their Tango adventures. There is still much that I would like to explore in this area though, and I will certainly be back!

From Kyoto station you can get to Kumihama in three hours for just under 5,000 yen. There are cheaper tickets but they take longer and require transfers. Check Jorudan for times and prices.