In Old School Gaijin Kyoto, Chris Rowthorn takes us on a hilarious tour of the bars and eateries of Kiyamachi as he revisits the haunts of his reckless youth with the ironic eye of experience.

I first arrived in Japan in January 1992. I was a kid of 26. Green as a sapling. I had graduated from college a few years earlier and had worked a string of meaningless, poorly paid jobs, none of which advanced my ambitions of becoming a writer. I wanted out of that situation and out of the States for a while, but I had no idea where to go. The leading destinations for footloose Gen Xers at that time were Prague and Alaska, where you could drink coffee and can salmon, respectively. Somehow, I wasn’t drawn to either place. So, when I heard that my old college mate John was studying Buddhism in Japan, I quickly called him up to find out more (the only people who used email at that time were employed by NASA).

On the phone, John painted me a vivid picture of Kyoto: it was a city of temples and shrines, surrounded by mountains. There were shops that sold noodles that were good and cheap. There were these places called sentos where you could bathe in huge tubs of steaming water. And John said he lived in an old wooden house by a small river and spent his days studying ancient texts, slurping noodles, and soaking in these hot baths.

Needless to say, I was utterly sold, and my excessively romantic imagination conjured up something straight out of a Chinese ink painting: secret temples materializing out of the mist, surrounded by improbably steep mountains, populated by the odd hermit and dragon, and, conveniently enough, plenty of cheap noodle joints.

Best of all, John said, you could easily get a job that paid ¥5,000 an hour for sitting around and chatting to Japanese people who wanted to practice their English. At the time, that was about US$35 (the yen was weaker then), which was utterly beyond my comprehension, since I was accustomed to earning about US$8 or $9 an hour doing menial and tiresome tasks. I imagined that US$35 was about what brain surgeons earned. I figured that I could probably retire in two or three years on that kind of income. Surely, I thought, he’s exaggerating a bit, but even if they paid half that, I’d be on easy street.

A few short weeks later, I found myself in a Northwest Airlines 747 coming in to land at Osaka’s Itami International Airport (this was a few years before they built the fancy new Kansai International Airport out in Osaka Bay). As the plane taxied to the gate, I peered blearily out the window and was surprised to see Air Force One sitting on the tarmac. I didn’t know George Bush (the elder) was coming, too! It didn’t seem like a good omen (and it certainly wasn’t a good trip for the President, who later that evening vomited onto the lap of Prime Minister Kiichi Miyazawa).

I cleared immigration and customs and found myself in a world of sinister policemen – the place was thick with them on account of the President – and purposeful salarymen. I stumbled out of the arrivals hall and confronted Osaka. It was straight out of Blade Runner – enormous neon signs written in wild Chinese characters loomed over streets filled with warrens of shops and restaurants and a legion of strange people scurrying about speaking an incomprehensible language. Where were the temples in the mist?! Where was the old wooden house beside the small river?! This was not what I had in mind at all! My jetlagged mind recalled a line from the film Withnail and I: “We’ve gone on holiday by mistake!” Only, this was no holiday – I had moved to an entirely different country by mistake!

Still, there was nothing for it, so I somehow found the bus to Kyoto and got on, with my old school suitcase (not even a proper backpack!). Things just got worse from there as we made our way out of Osaka and motored down the Hanshin Expressway. Every single inch of the place seemed worked over, modernized and transformed into some crowded futuristic jumble that eased neither the eyes nor the soul. The only thing that kept me from falling into a complete panic was sheer fatigue. Finally, as the bus made its way into the outskirts of Kyoto, I saw the illuminated pagoda of Toji Temple rising above the endless expanse of cheap concrete apartment blocks. Ahh…I thought, maybe there’s something here.

At that time, Japan was still high from the Bubble. It had burst a few years earlier, but most people hadn’t realized it yet. There was mad money in the air. All the Japanese seemed to have loads of it, and they truly seemed to be the supermen that books like Black Rain warned were about to take over the world. They were confident in their stride, everything they had and did was better, and the women were sexy as hell. I felt like some Okie hick pulling into Broadway circa 1925.

And, living in their midst, there was this gang of “gaijin” (foreigners) who were happy to pick up the generous crumbs that fell from the groaning table. And the Kyoto gaijin were a special breed. While Tokyo attracted serious business types who were strictly after the money, Kyoto got the culture vultures and the bohemians. Indeed, you could still sort of smell the patchouli in the air and hear the strains of the sitar in the distance. For Kyoto was one of the great K’s – a somewhat obscure member of the list that included Kabul, Kathmandu and Kuta. Kyoto was the place where you came to earn some money so you could get back out on the hippy trail – a few months teaching English and you could spend an entire year smoking hash in India or trekking in Nepal.

In Kyoto, it was expected that you’d live cheap. People boasted about how small their rents and rooms were, like hippie versions of Monty Python’s old men: “My place is three tatami mats and costs ¥20,000…So, my room is one-and-a-half tatamis and I have to sleep standing up, but it’s free and all I have to do is water my landlady’s bonsai.” This sensibility immediately appealed to me, since I was used to thinking of milk crates as furniture and US$10 as a lot of money. And everyone – the gaijin that is – was from somewhere else. Sure, there were plenty of Americans, but we also rubbed shoulders with exotics like Kiwis, Aussies, Israelis, and Swedes. And everyone had been everywhere: They tossed off names of Thai islands and Delhi bhang shops like they were local convenience stores.

So, intending to stay a year, I stayed 18. I came with a suitcase and I left with a wife, two children, and more stuff than you can cram into a shipping container. While we now spend much of the year in Bangkok, Kyoto still feels like home. I cannot walk a single street downtown that does not have some memory attached to it, some ghost waiting to ambush me. Despite myself, visiting these streets brings forth an unbearable sense of loss: for the years gone by, the people who are no longer there, and the young man I once was. Sometimes it’s good, sometimes it’s not so good, but it’s always there.

So, the other day, in a fit of extreme nostalgia, I decided to retrace my earliest steps in Kyoto, starting from the place I spent my first night, and ending up where I spent most of my time in those early days: the bars of Kiyamachi. 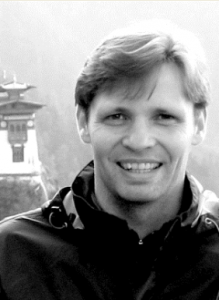