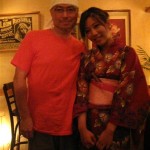 Tourists who came from afar were apt to think that the Gion Festival consisted of only the parade of floats on the seventeenth of July. Many also came to Hiezan on the night of the sixteenth. But the real ceremonies of Gion Festival continued all through July. In the various districts in Kyoto, each of which had its own Gion float, the festival bands began to perform and the … END_OF_DOCUMENT_TOKEN_TO_BE_REPLACED