Lovely little collection this. I purchased a copy last week at the Hibikiai Forum English Haiku Poems seminar, and as it rained solidly all the next day, I spent a very nice, lazy afternoon reading through it with the rainfall as perfect background music. 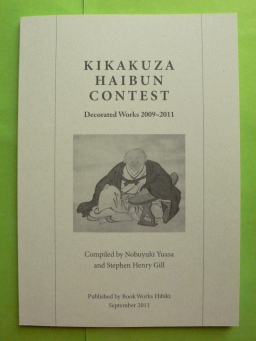 Haibun (俳文) are, simply put, a combination of prose and haiku poetry. Something about this collaboration between literary styles has always appealed to me. Maybe because I find I enjoy poetry more when I read it within a context, or as part of a story. Anyway, I picked up this volume because I wanted to learn more about how haibun works. It may seem simple enough to place poetry within a narrative, but to get the very best performance out of these dancing partners requires balance, lightness of touch, and an imaginative focus that mutually enhances both forms. The most famous haiku poet, Matsuo Basho, was also a writer of haibun, and his most celebrated haibun is おくのほそ道 (The Narrow Road to Oku)

, a diary of his epic journey through northern Edo Era Japan. This account of Basho’s poetic and meditative questing through the landscapes of the deep north is considered the best of his works and a masterpiece of Japanese literature. Basho set a high standard, but his works continue to inspire haiku and haibun writers in both Japanese and increasingly also in English. It is fitting that one of the Kikakuza judges, Nobuyuki Yuasa has included at the end of this anthology several of his own translations of short haibun pieces by the classical masters Basho, Yosa Buson and Kobayashi Issa as examples for would-be future haibun writers.

The Kikakuza Haibun Contest was created both to promote interest in haibun and to encourage its writing both within Japan and overseas. Within this volume of decorated works you will find a fine range of styles and subject matter from many different countries. The entries are short: no more than 30 lines per piece, but this brevity helps both the writer and the reader to focus on the essence of each experience. Reading these haibun I was transported to a remote Romanian farmhouse, a funeral ceremony in Bhutan, mysterious neolithic sites in rural Ireland and the abundantly biodiverse Australian countryside. There are haiku that describe an immense moon hanging over the Parisian landscape, resounding echoes in a Japanese temple, dawn light in an English wood, and dusk on the detritus of disaster in India. Strange Bedfellows by Margaret Chula is a carefully crafted tale of the uncanny. Coal Dust by Patricia Prime is a vivid memoir of home life in steam age New Zealand. Ellis Avery’s Winter Subway takes us into mindful meanderings on the New York subway. And in Memories of the Sun Melissa Spurr gives an explicit account of the environmental damage wrought by a housing boom in the Mojave desert.

“These trees remember where the sun comes up,” a tree mover says, “You have to be sure and plant them in the ground just the same way they grew, or they get confused and die.”

By far my favorite piece, however, is the one that opens the collection and the outright winner of the 2009 contest. For Rose by John Parsons is a fine tribute to a deceased friend, mingling reminiscence with scenes from her funeral. The narrative is deeply moving without being sentimental. The images of sunlit bees in the woods, ash on a spider web, people meeting “as two heads bobbing at sea”, are perfect, brilliant, beautiful.

In addition to these wonderful contemporary haibun and the classical translations mentioned above, these 78 pages contain a very instructive commentary from the judges, the judges’ own haibun and a solo shisan (linked verse) by Nobuyuki Yuasa in response to this year’s disaster in the north. It’s a slim volume but it contains worlds! You can order a copy via the Hailstone Haiku Circle’s publications page for 1000 yen + postage.

The contest will continue next year with the same rules and judges but under a new name. Entry is free and the deadline is January 31st, 2012. To find out more about the new Genjuan International Haibun Contest please click here.