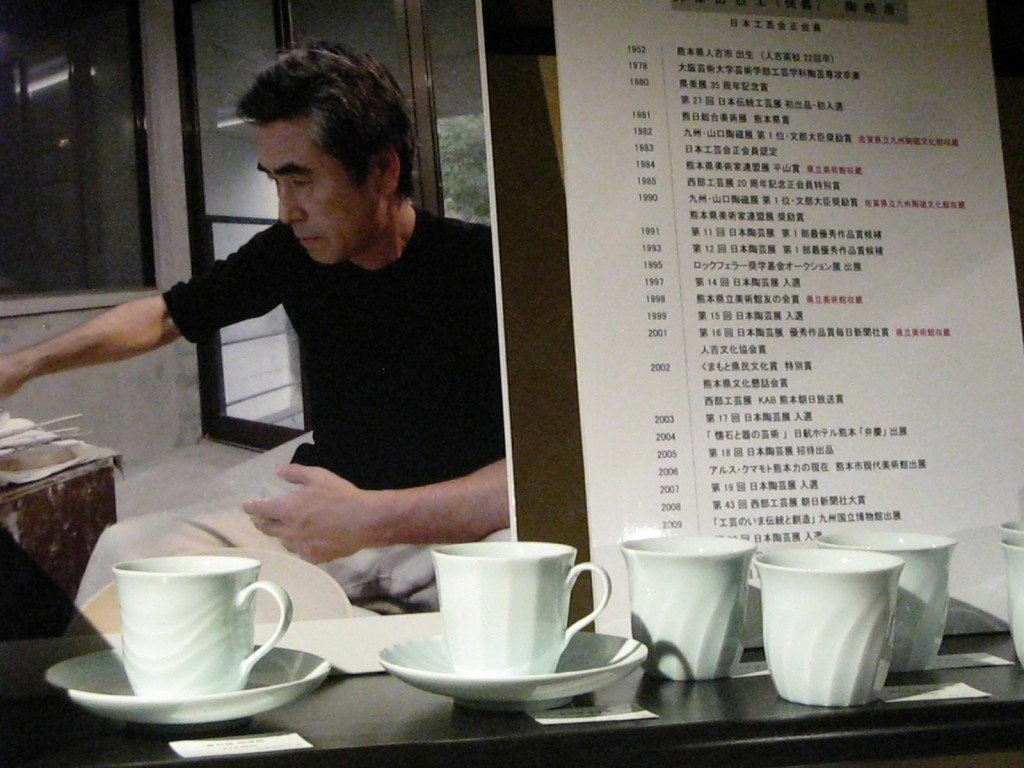 On Wednesday I spent a very pleasant evening at Robert Yellin’s ceramics gallery, looking at all beautiful things that he has gathered there and enjoying his fascinating conversation. Robert had invited me up to see his new exhibition; the beautiful blue celadon of Kubota Rekkou. Light, pale and graceful this 青白磁 (seihakuji – or blue-white porcelain) stands in marked contrast to the heavier, and more rustic wood-fired wares already on display. Robert drew my attention first to the latter kind of pottery, the high-fired, unglazed “yakishime.” In the corner were two large jars, one from Bizen and the other from Shigaraki. Explaining how such works are made, he told me, 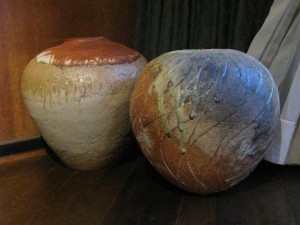 “The artist, makes the piece, the form, but has no idea how it’s going to turn out in the kiln… And the process is pretty intense you know. We just look at the finished product, but you have to think of the digging of the clay, the processing of the clay, the wedging of the clay, the drying… It’s a very long process to make a piece. And then they put it in this wood-fired entity of a kiln and they let go. Which to me is amazing because we live in this world where everybody wants control of processes, of their own lives, but it’s actually the letting go where a lot of the beautiful drama occurs. And that’s what goes on with these works. The potter put them in and had no idea how it would turn out, in coloration… It’s very different from Western aesthetics because it’s not perfect. You got these drips, you got cracks, you got fissures, you got pitted works, a lot of it’s uneven, but there’s a large portion of Japanese spirit in these wood-fired pieces. It’s the imperfection that makes them beautiful. And they are also very seasonal as well. These pieces are more meant for the autumn. They are heavy. They are really beautiful, large, energizing pieces. They are not really summer pieces… 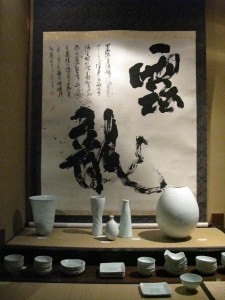 Which is why I wanted to introduce a summer type of style. In the summer, you want something that imparts not so much energy, but a coolness. Something that you just look at and you’re cooled. And that’s why we are having this exhibition of the bluish-white porcelain called seihakuji. You just walk into this room and you feel very light and airy. The touch when you do touch a piece becomes chilled… And with the energy issues that are going to be happening this summer, how are we going to cool ourselves? The Japanese have done it in an energy-saving way for a long time. Whether it be furin (a wind-chime) , whether it be some mugicha (barley tea), or kakigōri (shaved ice). And obviously people have changed their surroundings in the past to match the seasons. This house has these screens to let the air flow through. These are summer fusuma. The Japanese were pretty brilliant about matching their lifestyles to the seasons. When it was winter this whole house was divided into individual rooms and you heated one with a hibachi or something. But in the summer, it was furin, it was kakigōri, it was bamboo and sudare (light bamboo screens)… and it was using vessels like this, because your senses are affected by colors, by touch, and how you make this part of your daily life. Just look at that color! It cools you on many visceral levels.”

Robert held up a rice bowl so I could see the light pour through it.

“See how translucent it is! It really is a brilliant technique he has.”

Those teardrops of light were indeed impressive. But I couldn’t help reacting negatively to the price tag  – 6,300 yen, just for one rice bowl.

“Well, I’m sure it’s worth it,” I answered, “but most people don’t have the money to pay for that.”

“I know. That’s true. These are hard times.” said Robert.”But you are spending your money, to support an individual artist and a culture; a cultural asset to this society.

Let’s say you go to a hundred yen shop and buy a rice bowl. You are probably not going to value it that much. It’s not going to give you great joy. It’s just there. But if you take a little extra money, it doesn’t have to be 6,000 yen. It could be a younger artist (this guy’s sixty). I know a couple of young artists in this area. They sell rice bowls for 1,300 yen or something of that nature. You are spending your money in a nice way. You actually know who made it. It’ll stand the test of time. It will be valued after you leave this world possibly, by somebody… You are not dumbing down a culture. 100 yen shops are dumbing down this society. The whole backbone of Japanese beauty is based on craftmanship. Whether it be food, or architecture, or landscapes, everything is based on the value of handmade work. And obviously that’s changed. Society has changed… But that doesn’t mean you cannot support the beauty of these art forms – without dumbing down your own  culture…

You can see it obviously, with fast food, as I do. And convenience stores. And the whole culinary culture of Japan is changing with young people, because they just go in to a convenience store, buy a plastic tray of something, put it into a microwave, think that’s food and healthy, and they never touch handmade things anymore. So that’s going to affect not only their health but also the beauty of Japanese culture. There’s a lot to be said for taking a little extra money, spending it on something that’s handmade locally, particularly domestically and using something that’s not only going to bring you nourishment on a basic level, but also nourishment for your spirit. These vessels can nourish you on many different levels. And when you come to the end of a long day, you come home and you hold something that has a human consciousness in it. It’s different. It really is different. It’s made by a person, not a machine. Not for the motivation of profit. It’s to profit your soul. And nourishment on that level to me. That’s a pretty cheap investment. To root yourself at the end of a long day. How many people live with goods and they actually know who made them? Whether it be a dress, a piece of glass, a laquer tray, whatever… I don’t know everybody who made all the things in this house. But I know a lot! And that adds so much, because the makers are so happy. They are so grateful. So there’s a lot of ways to look at how you spend your money on a simple rice bowl. And it might be costly in the short term, but in the long term, it’s a great investment.”

My pictures don’t really do the pieces shown here justice. But to be honest, no pictures could. To appreciate these works and share in some of Robert’s enthusiasm for them, you need to see them up close and handle them yourself. And there is a lot of truth to what he said. On that day, I was tired after a long day of teaching and I had reluctantly cycled all the way from Shichijo/Omiya to Robert’s house in north-east Kyoto. But visiting him in his gallery, surrounded by beautiful art-works and listening to his passion for the craft, I felt inspired and I felt refreshed.

Many thanks to Robert for a lovely evening. If you would like to visit his gallery yourself, it is open from 10.30 am until 5.00 pm. The blue celadon of Kubota Rekkou will be on display until the 27th of May.

Location: From Imadegawa/Kita-Shirakawa go east up Tetsugaku no Michi. Cross to the north side of the stream after the police box and then take the next road on your left. At the end of this short street there is a huge flight of stone steps. Robert Yellin’s gallery is up a smaller flight of steps on your left. Here is a map.

You can find details on future exhibitions on his website here.