More than just the Aoi Matsuri! 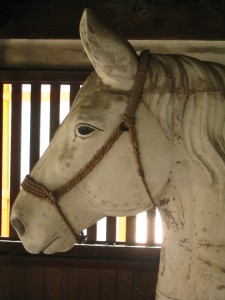 If you can imagine the rugged geography of Japan without paved roads or mechanized transportation, you will appreciate the important role which horses played here until fairly recently. There are hundreds of place names in Japan that reflect a long and intimate relationship with the horse. Keage, near Nanzen-ji Temple, is one such place. About 700 years ago, the great warrior, Minamoto Yoshitsune, met a samurai and retainers from the enemy Heike clan here. Passing each other on the cramped trail, the Heike samurai’s horse kicked back, splashing muddy water on Yoshitsune’s clothes. He flew into a rage, drew his sword, and killed ten members of the offending party. Ever since, the place has been known as Keage (literally, “kick up”). And when horses and not cars were the norm, finding a place to tether the animals was a city problem. Yanaginobamba between Karasuma and Kawaramachi, means “horse place among willow trees.” The street was named for a large open field near Hokoku Shrine where 17th century riders could “park and walk,” leaving their mounts to browse in peace. Painted screens depicting the area as it was then are still displayed at the shrine.

Words and image by Ian Ropke.

Hokoku Shrine also known as Toyokuni Shrine houses the mausoleum of Japan’s second great unifier Toyotomi Hideyoshi. At Kyoto Visitor’s Guide there is a very nice suggested walking route between Sanjusangen-do Temple and the Gion area that takes in this shrine along the way. LINK

You can find a map to Hokoku shrine here.

, editor of Kyoto Visitors Guide, and director of Your Japan Private Tours. He posts regularly for Deep Kyoto on the 15th of each month.