This looks nice, doesn’t it? 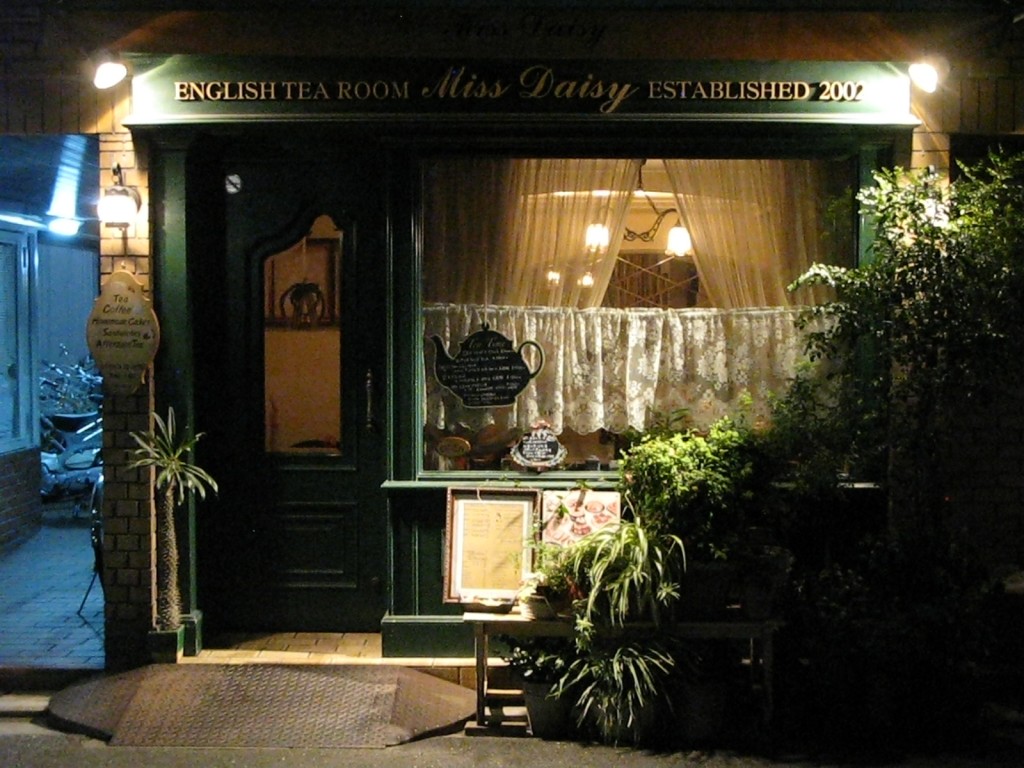 This is the rudest shop in Kyoto.

Now my basic rule for Deep Kyoto is: I review places I like and those places I don’t like, I don’t review. Normally, if a place I have visited has dissatisfied me in some way, I put it down to experience and move on. However, the people in Miss Daisy’s English Tea Room, were so extraordinarily and bizarrely rude that I feel I have to make an exception. After all, an innocent visitor to this fair city who has come from overseas, may see the words “English Tea Room” and think to themselves, “Oh, something familiar! I’ll be alright in there!” Well, judging solely from my own experience, you might not be alright in there. Let me tell you about it.

I’d passed the tea room a few times previously, and seeing the word “English” and being English myself I was naturally curious. Last Saturday, Mewby and I had been trudging about town in the pouring rain and this seemed like the ideal opportunity to try the place out. What better antidote to English weather than English tea? So in we went through a door with a tinkly little bell on it,  and what struck me immediately was how quaint and charming everything was. It was like someone’s dream image of an English tearoom, with oh- so-perfect furnishings and doilies and little teddy bears decorating the mantle. I called to mind that scene in the classic British comedy Withnail and I, where the eponymous heroes enter an actual English tea room, and proceed to offend polite society by drunkenly demanding “the finest wines available to humanity”. I smiled to myself, and resolving to behave appropriately, took a look at the menu.

To be honest, it was a little pricey and as neither Mewby nor I were terribly hungry or thirsty, we thought we would simply order a pot of tea and share it between us. The lady of the shop was herself  sharing a pot of tea with the only other customer, so it was natural to assume this would not be a problem. However, when Mewby asked for two cups with the pot, we were told in no uncertain terms that this was simply not done. Now this policy they have regarding individually ordering pots of tea is by-the-by. What we really didn’t like was the way we were spoken too. The lady’s face hardened as she addressed us, and it was very clear that she took extreme offense at simply being asked for two cups with one pot. Anyway, she retreated to a backroom while we reconsidered our order, and after reconsidering we decided we didn’t want to drink that much tea in an unfriendly atmosphere (after all life’s too short) and so we got up to leave. Now bear with me, because what happened next is the interesting part.

The hard-faced lady returned with a very angry gentleman in a fancy waistcoat. They had clearly been discussing us in the interim and when Mewby made a polite attempt at an excuse for our early departure the two of them proceeded to berate us most energetically. It seems that having entered their premises we were duty bound to make an order whether we wanted to or not. And by leaving without placing an order we were being extremely rude. The gentleman in the waistcoat, then demanded that we pay 1,200 yen for the water that had been placed upon our table.  I was flabbergasted. All I could do was repeat an unbelieving “One thousand two hundred yen?! For water?” while the gentleman continued to berate, scold, demand and furrow his brows. Finally, I’d had enough, “Look,” I said, “I don’t care about the money. I’ll pay it. No problem. But to my mind you are the people who are being rude”. And then the man simply shooed us away with a gesture and the lady shouted after us a rather redundant, “Never come back again!”

So that is why I have created a whole new category just for them: Blacklisted. In the five years I have lived in Kyoto and the twelve years I have lived in Japan (and I have travelled about a bit) I have never encountered this attitude before. It seems that these people believe that customers exist to serve them. How very very odd. And this in a country where the service is generally second to none. I keep scratching my head about it and I still can’t figure it out. Perhaps they thought that putting “English” on their tea shop gave them an automatic right to be snooty. Perhaps we appeared to them riffraff of the lowest common denominator for our proletarian teapot-sharing ways…

Or perhaps we should have simply told them, we were multi-millionaires.

English Tea Room Miss Daisy, is situated on Fuyacho, just south of Rokaku Dori. In the absence of manners, I’m afraid I don’t recommend it. I do however recommend the fine British movie Withnail & I

. It is very very funny indeed.