Billed as a “evening of music, dance and life”, this show looks to be amazing and it bears a very important message… 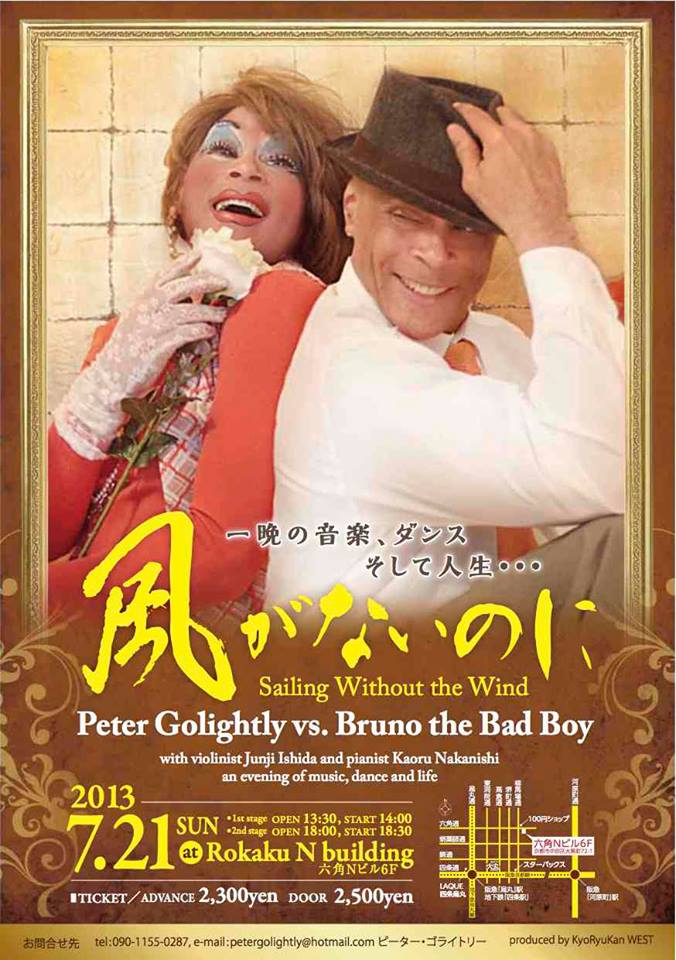 Peter Golightly has kindly written to tell us more about it:

“I’m a long time Kyoto resident and I’ve been doing the dance singing theater thing for better than 30 years here. Bruno has been around for about 18 years. He’s a performance artist who started as a go-go boy with Japan’s first western style drag show “Diamond Night” before turning activist in the late 90’s.

We’ve been working with a group called “It Gets Better” a support group that uses video testimonials to reach out to at risk youth to let them know that even though things may seem hopeless, ”It gets better”. Our target group is LGBT youth, but the program reaches out to anyone who may be thinking that life isn’t worth suffering through.

This performance is kind of a pre-performance to a project that I’m working on with the US Consulate (I’ve recently met with the Embassy staff as well). I’ve written a play called “Medea’s Daughter” and we’re working to have it performed at the Consulate later this year. Bruno will be performing several of my songs as a part of this coming project which we are calling “Conversations With Sappho”. “Sappho” being the protagonist in my play. “Conversations”, because we are proposing a panel discussion as part of the event.

“Sailing Without the Wind” is a two part performance, with both Bruno and I singing songs of pain, hope, love and triumph. Our song lists range from standards (Wonderful World, Close Your Eyes), to Japanese Pops (Makka na Taiyou, Tsubasa Kudasai), to Modern Pop music (Adele’s Someone Like You), to my original songs. Bruno will be singing primarily in Japanese, and I in English, but we each cross over quite a bit.

Accompanying both of our sets is my long time collaborator Kaoru Nakanishi on the piano (though most people may know his face from the DJ booth at various Kansai club events including Diamond Night at the Metro), and Junji Ishida on the violin. Junji is an even older friend who I am happy to be reconnecting with.

In addition to the two 30+minute sets, Junji will do a one man mini-set using his violin and an elotronic looping system. Bruno will conduct one of his notorious “Kamishibai Sing-a-longs”, and Peter will perform his latest performance art piece, “Sailing With out the Wind”, a tri-lingual (Swedish, Japanese, and English) song, dance and marionette piece.

There are two shows 2:00pm and 6:30pm. Each performance lasts about two hours. There will be a 20 minute break between Bruno’s show and mine, and drinks and “T” shirts and copies of my children’s book/play “Monster Time” will be sold.”

Thank you Peter! I’m very much looking forward to catching your show! 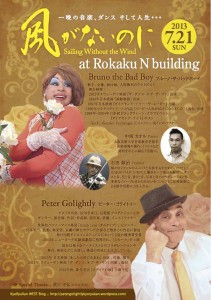