Disclosure: Some links in this article are affiliate links from which the owner of this website may earn a commission. 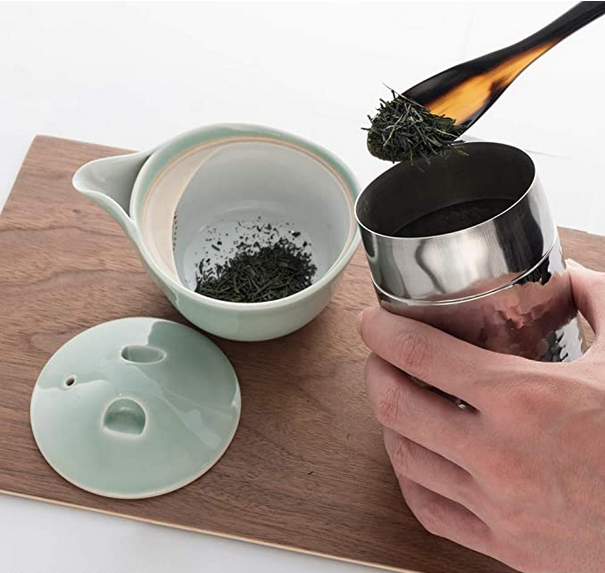 Mention tea ceremony and most Japanese will think of chanoyu, the way of tea based on a ritual for drinking the powdered green tea called matcha, which was formalized by Sen no Rikyū in the sixteenth century. Much closer to everyday life yet unknown to a surprising number of Japanese is the way of tea for sencha, or leaf green tea.

For history, Japan cannot touch China, where the legendary Emperor Shen Nung, said to have lived some five thousand years ago, is credited with first discovering that tea could be drunk. When it comes to ritual, however, Japan probably ranks first in the annals of tea.

The kissa, or tea, first brought to Japan from China in the seventh century was in the form of black tea leaves pressed together and shaped into small balls, which were used to make infusions. For T’ang Chinese (618-907), drinking tea was a part of a carefully cultivated atmosphere which embraced writing or reciting poetry, doing calligraphy, and looking at art. The Heian (794-1185) aristocrats of Japan, in their rush to embrace all things new and Chinese, adopted both tea and its attendant cultural atmosphere.

The History of Sencha

In the Sung dynasty (960–1279), Zen priest Eisai (1141-1215) brought both Zen Buddhism and powdered green tea back to Japan. In Kamakura Japan (1185–1333), however, the ruling military class looked on tea as a frivolity until Shogun Sanetomo, a famous toper, discovered that such tea was an effective antidote to hangovers and urged his followers to drink it. The combination of Zen and military backing was to give the tea ceremony which developed an indisputable place in Japanese artistic and cultural history. And until the beginning of the Edo period, matcha and chanoyu meant tea in Japan.

It was during the Ming dynasty (1368-1644) that tea leaves, as we know them, were first used to make tea. The resulting brew was so popular that, in China, powdered tea all but disappeared, and tea at last became the drink of the common person.

Priest Ingen, who brought the Ōbaku Zen sect to Japan, is also said to have introduced leaf green tea, or sencha, coming as he did from an area of China famous for its tea. By the middle of the Edo period (1603-1867), an elegant ceremony, reminiscent of the refined tea rituals indulged in by the Heian aristocrats, had become popular in Japan.

Developing later as it did, the sencha tea ceremony was inevitably influenced by the ritual of chanoyu, but at the same time it was, from its beginnings, something else, and, not only because the tea used was so very different. The sencha ceremony was based on a longing for the refined elegance and amusements of the Heian world, which appealed greatly to the artists and literati of Edo, who often used such scenes of the tea ceremony in their works.

Zen was the background to chanoyu; art and literature, with an underlay of Taoism, to sencha. Both ceremonies originated in China but were transmuted into something Japanese when they crossed the waters. Although China remained the world’s great tea nation, neither ceremony exists at its source any longer. Because Chinese cups, utensils, and accessories are often used in the sencha ceremony, however, it impresses many Japanese, at least in their initial exposure to it, as being Chinese.

The Ogawa school of sencha uses as its crest the Yin-Yang symbol, which, oddly, is better known in the West than in Japan. Ogawa Kouraku, the head of the school since 1973, is very mindful of the Chinese roots of the sencha ceremony and has even taught himself Chinese so that he need not rely on interpreters on his many trips to the continent. Although he has already written ten books about tea in Japan, his chosen lifework is writing a history of tea in China. “Japanese write about the tea ceremony with Japan as the focus,” he says, “but I want to write from a broader perspective.”

Most of the time, Ogawa is busy with teaching and administrative and social duties at the school’s headquarters in Kyoto and at branches throughout Japan. In addition, as head of the school, he is responsible for maintaining the sencha tradition and ensuring that it will be passed on to following generations.

According to Ogawa, there was a time when the sencha ceremony was in the ascendant in the Japanese tea world. At the end of the Edo period, sencha was the choice of the National Learning (Kokugaku) School and of other political leaders pushing for the overthrow of the military rulers, still associated with matcha and chanoyu. Hard as it is to believe, says Ogawa, from the Meiji period (1868-1912) to the beginning of the Showa period (1926-1989), the sencha tea ceremony had more followers–and more followers who were influential in all spheres. Indeed, many Kyoto potters whose chanoyu tea bowls are now famous spent their apprenticeships making cups and utensils for the sencha ceremony.

With the Sino-Japanese War (1937–1945) and World War II, China’s image in Japan declined severely and sencha was again eclipsed by matcha and chanoyu. Recently, though, perhaps as a reaction to chanoyu’s pervasive influence, there has been an upsurge in interest in sencha. “There is a chance,” Ogawa says, “that sencha will once again become the more popular of the two ceremonies,” adding with a quick laugh, “or maybe not.” 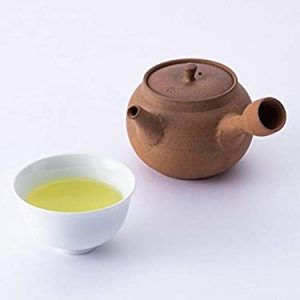 The Way of Sencha

Both the chanoyu and sencha ceremonies might strike the average non-Japanese as stiff and formal, but, without doubt, sencha is on the loose and easy side, and a typical ceremony resounds with banter and laughter. Then, too, the tea used is delicious. The green tea leaves, which have been dried but not fermented, are brewed in a small pot according to a process designed to bring out their best flavor.

Once brewed the tea is served in tiny cups. In the first brewing, a minute amount of tea, enough drops to cover the bottom of the cup, is served. In the second brewing, slightly more tea is served. After the second cup, a sweet is served, followed by a cup of hot water, which both cleans the palate and allows the guests to taste the water used in brewing the tea. During the preparation and serving of the successive rounds of tea, sweets, and water, the guests chat with each other and the server. Although the person preparing the tea is bound by certain rules of preparation, the guests need not follow a prescribed ritual for drinking, as in chanoyu, so the atmosphere is lighter and more relaxed than in the better known tea ceremony.

Tiny as the servings are, the taste is deliciously in accord with the ancient Chinese belief that one drinks tea to refresh one’s soul and water to quench one’s thirst. The first cup of sencha is a distilled elixir, with a taste bordering on ambrosial. The second tasting brings one back to the world, in the best sense of the words. As Lu Yu, author of the eighth century Chinese classic Cha Ching, or Classic of Tea, wrote, “Tea tempers the spirit, calms and harmonizes the mind, it arouses thoughts and prevents drowsiness, lightens and refreshens the body and cleans the perceptive faculties.” All that and it tastes good, too!

Nowadays, the millions of cups of green tea downed daily in Japan are drunk out of preference, habit, custom, and hospitality rather than ceremony, but for many students of tea, sencha provides a chance to appreciate the taste of tea with family and friends. As Ogawa points out, at the very least, studying sencha will enable one to make a good cup of tea and to serve it with grace and assurance. Mastering these skills, he says, takes about three months.

Beyond that, one is able to meet new people and also deepen one’s appreciation of art and culture. At the highest level, where the way of tea becomes a way of life, the goal is freedom. Along the way, many good cups of tea are to be had.

Full text by Ian Ropke. All rights reserved. Ian Ropke is the author of the Historical Dictionary of Osaka and Kyoto and director of Your Japan Private Tours. You can read his previous articles for Deep Kyoto here.

A selection of books about Japanese green tea…