Today I would like to introduce the Kyoto Insider Sake Experience; a wonderful brewery tour and sake tasting that Mewby and I recently enjoyed with our friendly guide, Kotaro Hashimoto, in the historic Fushimi district of Kyoto.

These days Kyoto’s Fushimi district is best known among international travelers as the location of Fushimi Inari Taisha Shrine and the meandering passages of vermilion torii gates that snake their way up Mount Inari. Over the last few years however, this atmospheric mountain shrine has become so popular that unless you visit in the very early morning, or late evening, you will find it far too crowded to enjoy.

Go a little further south though, and you will enter the much quieter and historic sake brewing area of Fushimi. This is one of the most important sake producing areas in Japan and a great area to explore. The streets are still lined with traditional wooden breweries many of which are actively producing sake (normally called nihonshu in Japanese), and there are other former brewery buildings which have been converted into restaurants where you can enjoy sake along with the very best local cuisine. Unfortunately, not many of the working breweries are open to the public, and although there are some museum facilities with English language information, such facilities are quite limited. Regrettably, this fascinating area remains much under-utilized by the local tourist industry.

A new company called Add Stories is trying to put that right however, by opening up the world of sake brewing to a wider, international audience. Just recently they got in touch and offered Mewby and I the opportunity to take part in a “sake experience” tour in Fushimi – followed by a sake tasting. Naturally, we jumped at the chance!

Our tour began at the Fushimikan tourist information center, where we met our guide for the day, Kotaro Hashimoto. Kotaro is the founder of the company, and an extremely interesting chap who formerly ran his own restaurant business in Brisbane, Australia. A couple of years ago he returned to his home-town of Toba, in Fushimi and now he has set himself a special mission: to educate people about Fushimi’s sake and sake culture. Kotaro is very sincere in his desire to help people understand sake better, and his enthusiasm for this topic is infectious!

After a short chat to get to know each other, Kotaro led us off on the first part of the tour, to the Gekkeikan Okura Sake Museum and Brewery. On the way, Kotaro pointed out a popular local well, where people were lining up to get water.

The name “Fushimi” originally meant “underground water” because of the abundant fresh spring water in the area. It is this spring water which helped Fushimi flourish as a sake making town, and each of the breweries has their own fresh water source. The water is soft and of especially good quality, so it tastes much better than water from a faucet – and that’s why so many people were waiting to fill their bottles.

Pretty soon we arrived at the Gekkeikan Okura Sake Museum which is run by the Gekkeikan Sake Company, and housed in an old brewery building dating back to 1909. The company itself was established in 1637, making it one of the world’s oldest companies, and today it is a major producer of sake. However, as Kotaro led us into the museum’s adjoining brewery, he told us that it is not the company that matters, so much as the particular brewery. And this particular brewery, though small, has won many awards.

Here, in the brewery, Kotaro talked us through the entire sake brewing process, starting with the special varieties of rice that are used and explaining how they are polished down to differing levels of refinement.

The whole process was explained, step-by-step, in an easy-to-follow way. Although there is some English language information in the brewery, alongside the displays, it really helps to have an expert there to explain it to you properly.

I didn’t know much about the sake making process previously, but it is really quite ingenious. A special cultivated fungi is used to make a molded rice called koji.  This koji is then mixed with steamed rice, water, and yeast, and as the koji converts the rice starch into sugar, the yeast simultaneously begins the fermentation process that converts this basic mash (called moto) into sake. 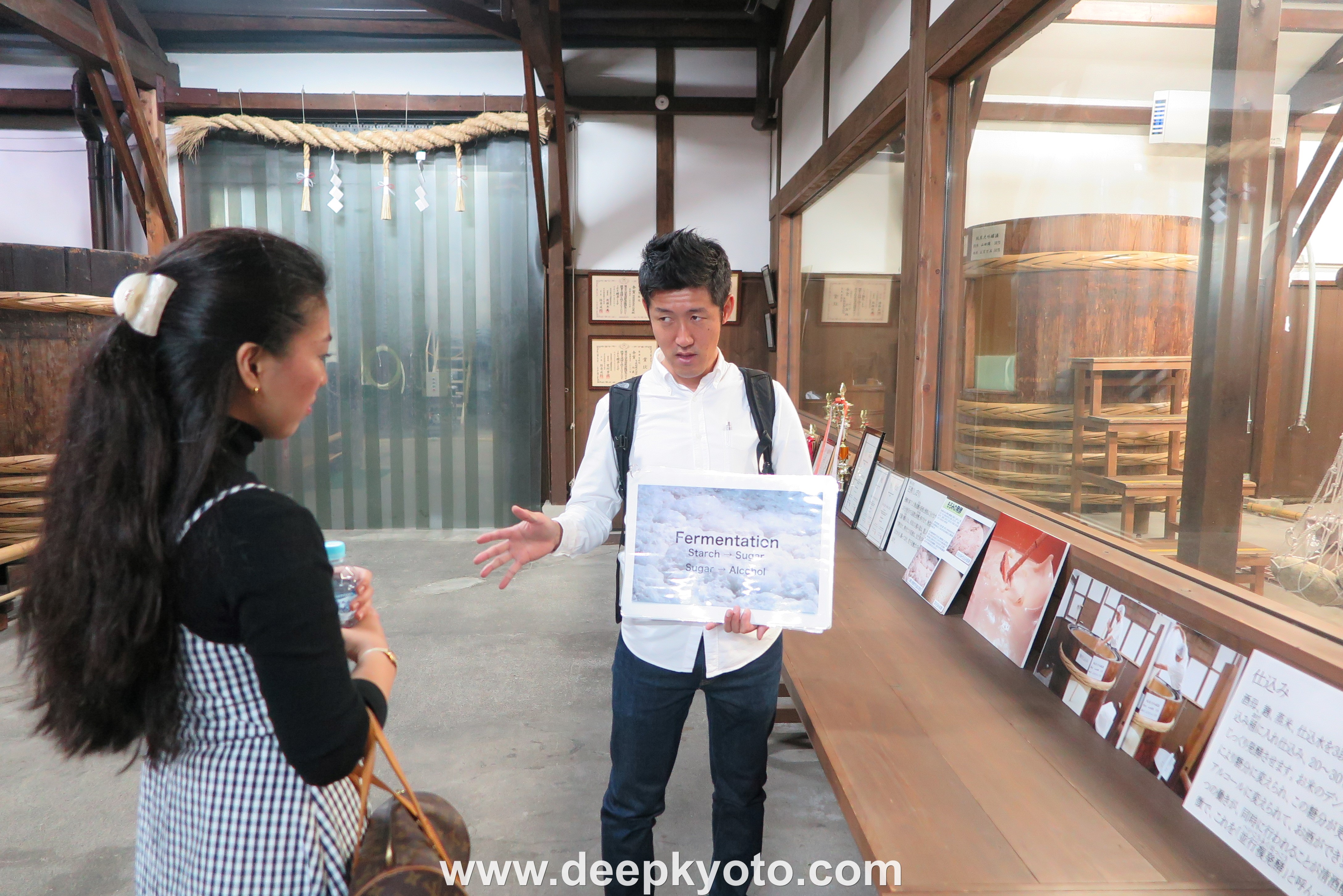 We were actually able to see this magical fermentation process, with the moto bubbling away in large vats before our eyes. 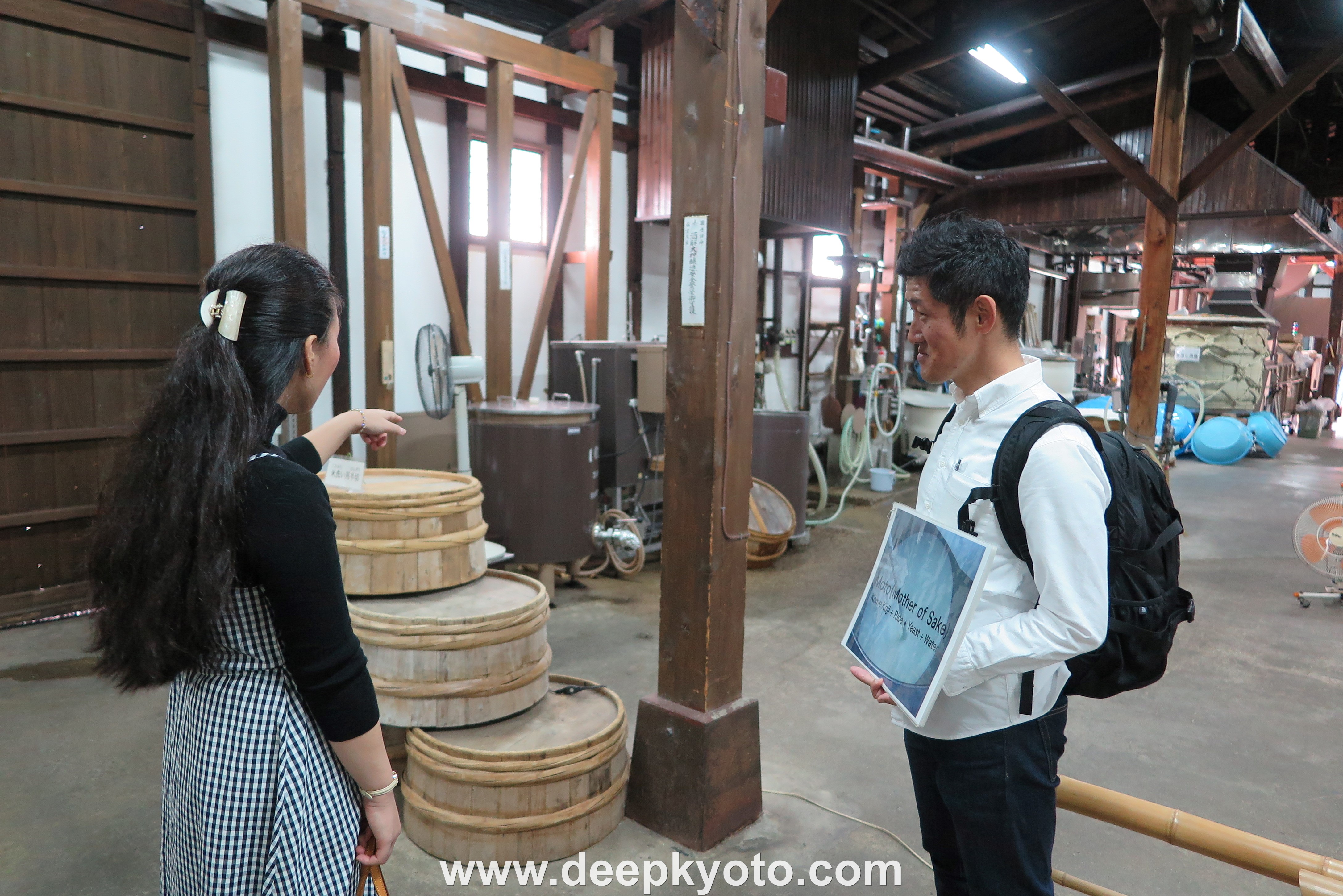 Kotaro explained that although the essential ingredients of rice and water are important to the final product, the most important part is technique. Through his explanation I acquired a new-found respect for the sake-making process. There are of course, many more steps than the basic stages that I outlined above. Understanding this process however, is important to understanding sake – and more importantly to understanding your own sake preferences.

Outside there is a courtyard between the brewery and the museum, and in the courtyard there is a spring. The water from this spring is the same water used to make Gekkeikan sake, and I must admit I had several cupfuls. It tasted that good!

We then went into the museum which has many items on display showing how sake was made historically. There is some English language information by the displays, but that does make for an awful lot of reading. Having Kotaro there to point out the more significant artifacts, and to answer our questions about some of the historic vessels and bottles on display was a real boon. 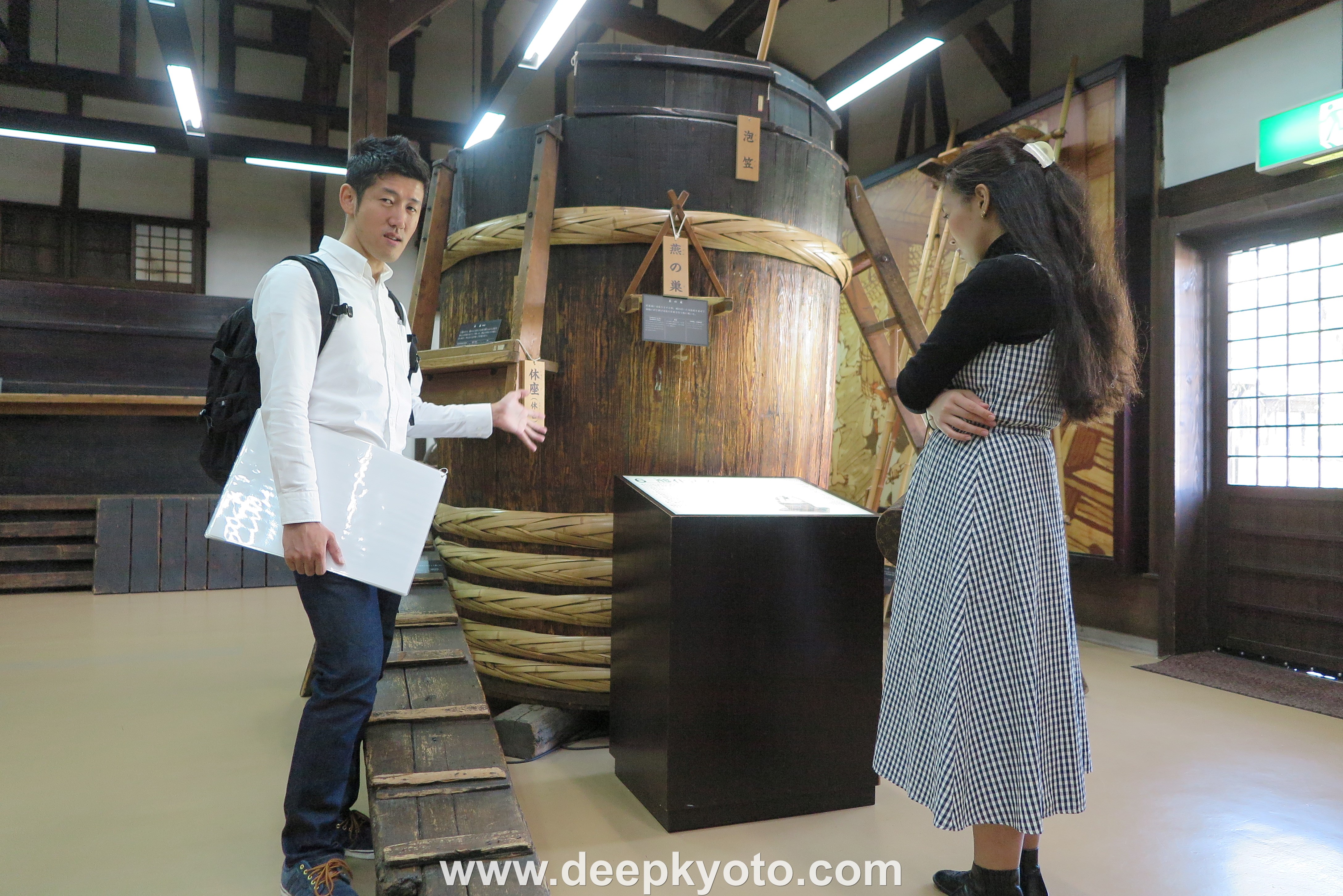 If you visit the Gekkeikan Okura Sake Museum, a free sake tasting is included in the ticket. However, this proved to be merely a warm-up for the tasting that Kotaro had prepared for us later on!

The museum also has a gift shop with a bewildering variety of sake and sake-related products on offer. If you wish to buy some souvenirs, having a guide to offer advice and information about the different products is really helpful.

Following our museum and brewery visit we headed back to the Fushimikan tourist information center to put our freshly-acquired knowledge to the test with a proper sake tasting. Kotaro had already explained the different sake varieties that we were to taste, and given us each a miniature version of the card below, which we could keep for future reference.

The object of the sake tasting is to find out for yourself which sake varieties you prefer, and to be able to recognize them again, even if you cannot read Japanese.

We tasted seven varieties of sake, each of which Kotaro explained according to their qualities, whether light or rich, sweet or dry. We then graded each sake according to our own preference. The really interesting part of the tasting though, was in the second part when we tasted them again as an accompaniment to different foods.

These food pairings were a revelation! We learned which varieties of sake best match which foods, and we also learned how a well-judged food and sake pairing can dramatically bring out the flavor of both. I actually wasn’t too keen on the aged sake (dating from 1999) when I first tasted it – but as a topping for vanilla ice cream, it was phenomenal!

The full experience including the brewery tour and sake tasting took 3 hours, but there is also an option to do a 90 minute sake tasting without the tour. We thoroughly enjoyed the tour and tasting, and I am very happy to recommend them both. Most importantly, if you take this tour and tasting experience, you will acquire knowledge about sake that will help you to enjoy it in the future, both on its own, and as an essential accompaniment to Japanese cuisine. For this reason, if your time in Japan is brief, Kotaro recommends taking the tour at the start of your trip, so that you can use this knowledge right away and continue to enjoy sake throughout your visit.