This is an excellent little book, packed with useful information for beer lovers here in Japan and a handy portable size for carrying around to all those bars. Personally, I enjoy drinking craft beers, but I am very far away from being an expert, and far too lazy to study the variety of beers available in a systematic way. Fortunately, Mark Meli has done my homework for me. Mark has long had an almost venerated reputation as the authority on craft beer here in Kyoto. In fact Tadg revealed at the book’s launch party that he has long relied on Mark’s counsel when choosing beers for his bar. Now Mark has distilled that expertise and five years of research into this fine book: the very first, and currently only English language guide to Japan’s craft beers.

What you can find within these pages: 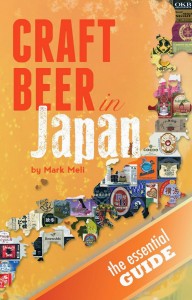 As a guide to breweries, beers, drinking establishments and festivals, I’m sure this book will prove its worth over time. I have already found the Ji-biru Styles section very informative. As an analysis of the main styles of craft beer available here and how they tend to resemble or differ from their European and American cousins, it provides a useful starting point for getting your bearings. Mark also said something about how to approach beer styles at the book’s launch party last month:

“We have to try to respect all kinds of beer styles, to be fair, to give them a fair evaluation based on their own merits. That’s what I try to do in this book… It’s kind of important here to be open to all styles because one of the best things about Ji-biru, Japanese craft beer, is that they do so many different styles so well… I have this slogan I wrote on many books today. I think it’s true to my heart: Slow Beer, Small Beer. “Slow Beer” is definitely like “slow food”, “slow life”,  and it means two things to me. It means take your time to appreciate beer and to know about the beer you’re drinking. But also to take the time to approach it on its own terms, on its own merits and understand what it’s going to give to you…
And also, and I think this is very important: Small Beer. It doesn’t necessarily mean “small glass”… A lot of people in Japan, I don’t think they’ve seen this so well, because Japanese big beer is not terrible. But small beer, small breweries, local breweries are the ones who have made beer great again in the world: in America, in Japan… and they’ve been continuing to do that in Europe.”

These are the small, independent breweries and beers that Mark tells us we need to support. A noble message, and with this guide, he has given us a fine tool to help us do just that. A big kanpai to this book and its contribution to craft beer culture in Japan!

The print edition of Mark Meli’s Craft Beer in Japan: The Essential Guide is available to order from Bright Wave Media here: http://japanbeertimes.com/craft-beer-in-japan/
You can also download it as a Kindle e-book here: amazon.com
And I do believe there are still some copies available here in Kyoto at Tadg’s Irish Bar & Restaurant: http://tadgs.com/