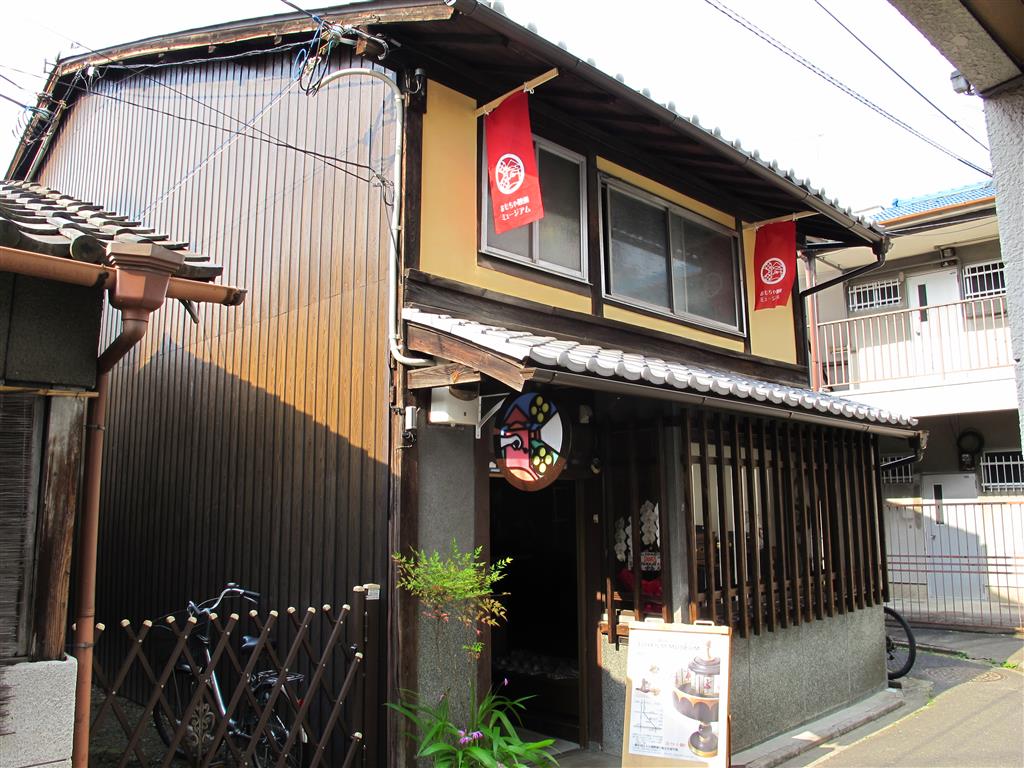 Kyoto’s newest museum, the Toy Film Museum,  opened on May 18th 2015 on a tiny little side street just off Koin Doori in the Mibu area. I ventured down there shortly after it opened to see what it was like. My general feeling after visiting is that the place has a lot of potential, but if you are not fluent in Japanese and/or super interested in old movies then this place isn’t really for you. I am interested in old movies, so I really liked the place, but I would understand if it wasn’t everyone’s cup of tea. However, they will be holding events, talks and movie screenings there, which may be of more general interest. More about the events later. First here’s what I found when I visited:

* It’s in a cute old machiya building, but at present only a small part of that building contains exhibits.
* The main exhibits are antique cameras and home movie projectors. These are not individually labelled with information.
* I was given a print about the contents of the museum and there is some information on the surrounding walls about movie history but naturally this is all in Japanese.
* Likewise the staff only speak Japanese, but they are super friendly, and they very kindly gave me a cup of coffee and a biscuit!
* There are some toys and toy projectors you can play with, but by themselves they are probably not enough to warrant the 500 yen entry fee.
* They also have some old silent movies on show on a TV screen hooked up to a computer. These seemed to be mostly swashbuckling samurai chambara movies, which back in the golden age of Japanese movie making were as popular as Hollywood westerns.

I rather enjoyed talking with the people at the museum who were very happy to talk about old movies with me. It’s also nice to see this aspect of Kyoto’s heritage being celebrated. Kyoto has a long historical connection with the movie industry, Japanese movie making was basically born here, and during Kyoto’s movie-making heyday in the 1930s the local studios at Uzumasa were knocking out 4 movies a month. Remember, in those days, people didn’t have TV, so movies were the most popular form of entertainment and showings were always packed.

During the silent movie era, Japan had a rather unique way of presenting movies. In addition to musical accompaniment, there was also a narrator, called a 活弁士 (katsubenshi). Like the very best storytellers, this narrator wouldn’t just explain the action on screen but would give voice to the characters and really bring the movie to life. Some of these narrators were extremely popular in their own right and people would go as much to enjoy the katsuben performance as to see the movie itself.

Now this brings me to an upcoming event at the Toy Film Museum which presents a unique opportunity to enjoy a silent movie screening in an old-timey Japanese style. As I wrote above, the organizers of the museum are planning to hold some talks and old movie screenings at the venue and there is a special movie screening coming up this Sunday on June 14th. The movie is called 僕らの弟 (Our Little Brother), a 1933 movie by celebrated screenwriter Yoshitaka Yoda, and it will be narrated live by expert movie narrator, Kataoka Ichiro. You can read more about the movie in the flyers which I shall post below. The fee for entry is 1,700 yen and the doors open at 18.30 for a 19.00 screening. Of course the whole event is in Japanese, but if your language skills are up to scratch this could be a really entertaining event. And if they aren’t up to scratch, well it’ll be good practice for you. Here are those (clickable) event flyers.

Location: The Toy Film Museum is on a tiny side street on the east side of Koin Doori: the diagonal street that runs betwen Shijo Omiya Station and Nijo Station. The side street is easy to miss but there’s a shop with a sign reading “National Bicycle” just opposite and a Toy Film Museum sign to point the way. You can find a map here: MAP.
Address: 〒604‐8805
京都府京都市中京区壬生馬場町29-1
Telephone Number: 075(803)0033
Website: http://toyfilm-museum.jp/